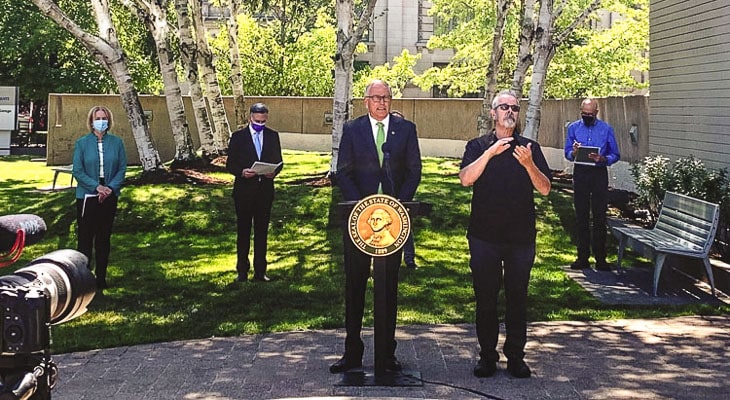 Posted By: Katie Daviscourt via The Post Millenial October 26, 2021

Please Share This Story!
PDF 📄
Washington State is close to going full-on Australia as Gov. Inslee now looks to mandate vaccines for all private businesses. Duly-elected state legislators who have refused the vaccine are being locked out of government buildings in Olympia. State troopers have been fired along with other first-responders. ⁃ TN Editor

This package, which is an extension of current mandates, grants Inslee the ability to enforce COVID vaccine.

The Washington Department or Labor and Industries (L&I) filed an emergency rulemaking package last week extending emergency powers to Democrat Governor Jay Inslee. This package, which is an extension of current mandates, grants Inslee the ability to enforce COVID vaccine mandates on all private businesses in the state of Washington, according to elected officials.

“This mandate from L&I demonstrates a complete lack of transparency, which dilutes public trust in our government and fails to show the agency’s good faith in promulgating the rule. The reality is this move by L&I is a blank check for the agency to enforce any of the Governor’s mandates or edicts on private employers.”

“If L&I desires to make such a rule, it should do so in an open and transparent manner that allows public review and comment. Even if an opportunity for review and comment is not afforded the public, L&I’s website should host the proposed rulemaking to grant easy access to the public,” they continued. “Furthermore, adopting such a broad, vague rule without clear direction will lead to arbitrary enforcement.”

Walsh and Young questioned the ethics of Labor and Industries and said the department cannot demonstrate that it “exercised honestly” to arrive at the rules granted to Governor Inslee.

“There is no clear case for ‘good cause’ or ‘the preservation of the public health, safety, or general welfare’ as the governor’s proclamation already addresses these issues, making L&I’s mandate arbitrary and capricious,” the representatives added. “We call on the governor to immediately repeal this mandate. If L&I wants to push this policy, it needs to go through the proper channels and work with the Legislature.”

Last week, Walsh announced on Facebook that he had been was locked out of buildings on the Capitol campus in Olympia for failing to provide proof of COVID-19 vaccination.

In the video Walsh said, “…this is not legal and it’s not moral. We are absolutely falling into some sort of Stockholm Syndrome that’s taken a hold of the legislature here in Olympia. And rather than being that active check against the Governor’s abuses, we’re following the Governor’s lead. That’s not what we’re supposed to be doing. We’re supposed to be standing up to that and representing you and giving you a voice in the John L O’Brien building or over there under the dome.”

Inslee issued a vaccine mandate in August and unlike other mandates across the country, provided no option to test-out. His message was crystal clear, obey or lose your job. Despite mass protests across the state with thousands of state workers in attendance, Inslee followed through on his orders and terminated  thousands that decided not to comply.

It is obvious what their goal is. They want to purge government and business of all critical thinkers, and retain only those who will blindly obey orders. This is the first requisite of any authoritarian dictatorship, and even the most naive now have to see that this is what the governor and his accomplices are building in the image of Satan Klaus’ anti-human “great reset” tyranny.

Inslee is a muderer
He needs to be neutralized

They screamed “RESIST” for four years. Now, they demand compliance without any objections.

Interesting how South Dakota has not participated in any of the CORONA-CON lies,mask, lock downs and other psy-op bull shit

Ancient Rome suffered under only one Nero. America now has them by the dozens. It is amazing that a shoe salesman or taxi driver can be elected governor and instantly become an authority on everything!

Inquiring minds would like to know….What has been promised to these lawless and heartless government officials that they are okay with tearing down their country and the lives of those around them? Good God in heaven…How do they sleep at night?

Der Fuhrer cannot mandate any of this. It’s illegal. Laws have to be passed in the state legislatures. If what Inslee proposes can be read as law in the RCWs (Revised Codes of Washington) then they can be enforced. Otherwise it’s just bullying and threats. Stand up, Washingtonians, and RESIST! This is how Hitler got started.

This is the biggest turd Sasquatch there ever was. I bet if we do a Full Forensic Audit of the 2020 election (and others) you’ll find out that this guy lost big. With so many smart people in Washington and around the USA, we get this crap. (see I didn’t use elect)
Now he is going after private businesses. This guy wouldn’t qualify to clean bathrooms.

I have a question. To my understanding Washinton has turned into a blue state, as has Oregon, just as California is blue. Living in California I can say that the majority of the people believe their government is doing the correct thing to “protect their health”. So, wouldn’t the majority of Washington’s population also feel the same? Most of us who don’t want or need a nanny government see how dangerous this all is but maybe a mass exodus is what’s needed and leave these states to those who want that. Of course, with that being said, how do we… Read more »

Good for you. We have a number of CA in OK now. But NO, the fascists cannot have CA, WA, OR unless the people there agree to it. I seriously doubt there is a majority in agreement with the politicos promised future of total slavery mitted out through their so-called health passes. What a joke. Health! HA!!!!

GOOD EXAMPLE of: Fascists in a free country working hard for their totalitarian overlords in the UN globalists’ criminal cartel. Inslee is/has been working extraordinarily hard using her office as a weapon to achieve the Chinese State model in your WA State. She knows exactly what she is doing and for whom she is doing it. Make no mistake. Take her DOWN Washington citizens!! Go to the mattress for your freedom or lose it forever! Your state has become the poster child for a travesty of criminal activity supported by her. Never, ever believe anything she says. She’s a LIAR,… Read more »