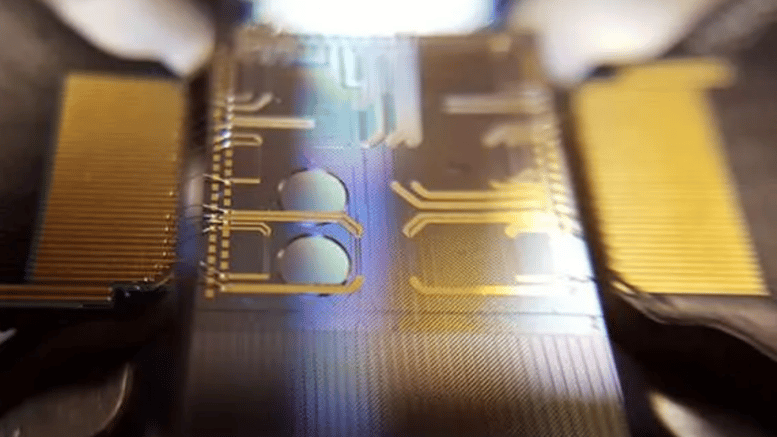 Please Share This Story!
PDF 📄
This is a breakthrough of epic proportions as a single chip has set a new data transfer record of 1.8 Petabytes per second. One Petabyte is equal to 1,000 Terabytes, or roughly 500 billion pages of standard printed text. The entire Library of Congress could be transmitted 100 times in a single second. The implication for global digitization is inconceivable. ⁃ TN Editor

An international group of researchers from Technical University of Denmark (DTU) and Chalmers University of Technology in Gothenburg, Sweden have achieved dizzying data transmission speeds and are the first in the world to transmit more than 1 petabit per second (Pbit/s) using only a single laser and a single optical chip.

In the experiment, the researchers succeeded in transmitting 1.8 Pbit/s, which corresponds to twice the total global Internet traffic. And only carried by the light from one optical source. The light source is a custom-designed optical chip, which can use the light from a single infrared laser to create a rainbow spectrum of many colours, i.e. many frequencies. Thus, the one frequency (colour) of a single laser can be multiplied into hundreds of frequencies (colours) in a single chip.

All the colours are fixed at a specific frequency distance from each other – just like the teeth on a comb – which is why it is called a frequency comb. Each colour (or frequency) can then be isolated and used to imprint data. The frequencies can then be reassembled and sent over an optical fibre, thus transmitting data. Even a huge volume of data, as the researchers have discovered.

One single laser can replace thousands

Victor Torres Company, professor at Chalmers University of Technology, is head of the research group that has developed and manufactured the chip.

“What is special about this chip is that it produces a frequency comb with ideal characteristics for fiber-optical communications – it has high optical power and covers a broad bandwidth within the spectral region that is interesting for advanced optical communications,” says Victor Torres Company.

Interestingly enough, the chip was not optimized for this particular application.

“In fact, some of the characteristic parameters were achieved by coincidence and not by design,” says Victor Torres Company. “However, with efforts in my team, we are now capable to reverse engineer the process and achieve with high reproducibility microcombs for target applications in telecommunications.”

In addition, the researchers created a computational model to examine theoretically the fundamental potential for data transmission with a single chip identical to the one used in the experiment. The calculations showed enormous potential for scaling up the solution.

Professor Leif Katsuo Oxenløwe, Head of the Centre of Excellence for Silicon Photonics for Optical Communications (SPOC) at DTU, says:

“Our calculations show that—with the single chip made by Chalmers University of Technology, and a single laser—we will be able to transmit up to 100 Pbit/s. The reason for this is that our solution is scalable—both in terms of creating many frequencies and in terms of splitting the frequency comb into many spatial copies and then optically amplifying them, and using them as parallel sources with which we can transmit data. Although the comb copies must be amplified, we do not lose the qualities of the comb, which we utilize for spectrally efficient data transmission.”

The researchers’ solution bodes well for the future power consumption of the Internet.

“In other words, our solution provides a potential for replacing hundreds of thousands of the lasers located at Internet hubs and data centres, all of which guzzle power and generate heat. We have an opportunity to contribute to achieving an Internet that leaves a smaller climate footprint,” says Leif Katsuo Oxenløwe.

Even though the researchers have broken the petabit barrier for a single laser source and a single chip in their demonstration, there is still some development work ahead before the solution can be implemented in our current communication systems, according to Leif Katsuo Oxenløwe.

“All over the world, work is being done to integrate the laser source in the optical chip, and we’re working on that as well. The more components we can integrate in the chip, the more efficient the whole transmitter will be. I.e. laser, comb-creating chip, data modulators, and any amplifier elements. It will be an extremely efficient optical transmitter of data signals,” says Leif Katsuo Oxenløwe.

Whoopsie! Looks like Matlhus once again – after the Great Horse Manure Crisis of 1894, the Simon/Ehrlich Wager, Hubberts Peak Oil, is wrong yet again.