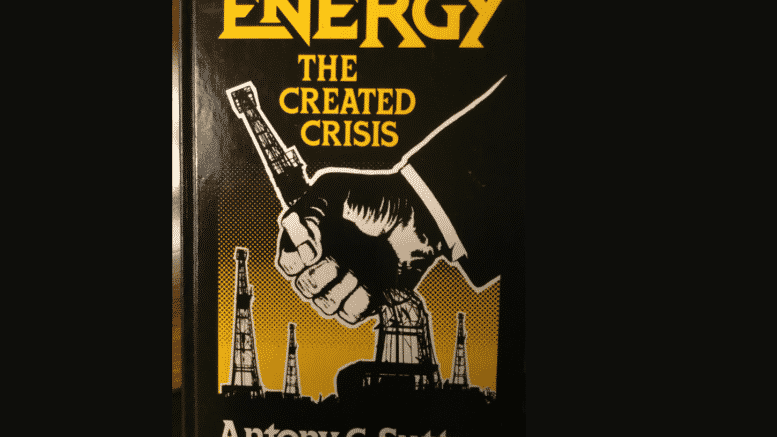 Please Share This Story!
PDF 📄
In 1979, Antony C. Sutton published Energy: The Created Crisis.  The Wall Street Journal wrote “The energy crisis is a snare and a delusion. Worse, it’s a hustle.” Biden is following President Jimmy Carter’s exact same plan to create a present-day energy crisis and like Carter, he is doomed to serve only one term. We barely survived Carter, but Biden may bury us. ⁃ TN Editor

The Democrats are well aware of the old adage, “Never let a good crisis go to waste,” and are busy applying it as gas prices spiral out of all control. As PJM’s Chris Queen discussed Monday, Transportation Secretary Pete “Mr. Mom” Buttigieg appeared to be fantastically out of touch when he responded to skyrocketing prices at the pump. “Clean transportation can bring significant cost savings for the American people as well,” asserted Buttigieg. “Last month, we announced a $5 billion investment to build out a nationwide electric vehicle charging network so that people from rural to suburban to urban communities can all benefit from the gas savings of driving an EV.”

It was a real “Let Them Eat Cake” moment for Secretary Pete, but there is a method to his madness: the administration isn’t just out of touch, it is actively trying to use this crisis to impose its green agenda. Environmental Protection Agency (EPA) chief Michael Regan confirmed that on Monday.

The Sacramento Bee reported that Regan was at the White House, along with Buttigieg and alleged Vice President Kamala Harris, to announce “proposed limits on new buses and large trucks to curb some of their greenhouse gas emissions by up to 90% in the next decade.” In the course of his remarks, Regan boasted, “We’re pressing the accelerator to reach a zero-emissions future sooner than most people thought.”

Nothing presses the accelerator to reach a zero-emissions future more effectively than gas prices rising so high that driving a carbon-emitting car is simply too expensive.

At the Monday White House event, Harris was likewise enthusiastic, saying, “We are all in the midst of a turning point. We have the technology to transition to a zero-emission fleet. We can address the climate crisis and grow our economy at the same time.”

We are all in the midst of a turning point, and the green energy forces are not going to let it go to waste. On Tuesday, Old Joe Biden said that the situation was going to get worse, as prices are “gonna go up,” and that he couldn’t do anything about it. “Can’t do much right now. Russia’s responsible.” Biden also risibly claimed that “It’s simply not true that my administration or policies are holding back domestic energy production.”

How is it possible that the president of the United States could be such a shameless liar and constantly get a pass for it from the establishment media? In lying so brazenly, Biden must know that no “journalist” will challenge him, and he must also have such a low opinion of the American people that he assumes most will not realize he is lying. On that score, he may be at least partially right: it’s likely many Americans don’t know that Biden promised, during a presidential debate, that he would “transition away from the oil industry.”

Old Joe delivered right away, shutting down the Keystone Pipeline, placing a moratorium on oil leases on federal property (which was blocked in court but is apparently still followed in the Interior Department, as the number of drilling permits it has issued has dropped sharply), suspending some existing drilling leases, restricting fracking, placing onerous financial regulations on the oil industry, and more. Now, his handlers have made it clear that they have no intention of revisiting any of this, but instead are looking into buying oil from tyrannical rogue states such as Venezuela and Iran.

“Biden may burry us”. Amen to that. Will there even be an election in November? Time will tell. Biden has chosen the worst of the worst for his cabinet, and it shows his utter contempt for mankind and all that is good, including God Almighty, even so much so there are evil spirits behind it. So evil these men and women happily condone lies, deception, murder, theft, black mail, kidnapping, rape, sodomy, sorcery, brutality, burning and looting, treason and destruction all at the same time, and more. If we don’t see it, we are blind!

The utility companies have thus far had little to say about the alarming cost projections to operate electric vehicles (EVs) or the increased rates that they will be required to charge their customers. It is not just the total amount of electricity required, but the transmission lines and fast charging capacity that must be built at existing filling stations. Neither wind nor solar can support any of it. Electric vehicles will never become the mainstream of transportation! They’re too expensive, too unreliable, rely on materials mined in China and other unfriendly countries, and require more electricity than the nation can afford.  In this second… Read more »

“Nationwide EV Charging Network” Doesn’t matter what, everything fits into their agenda.