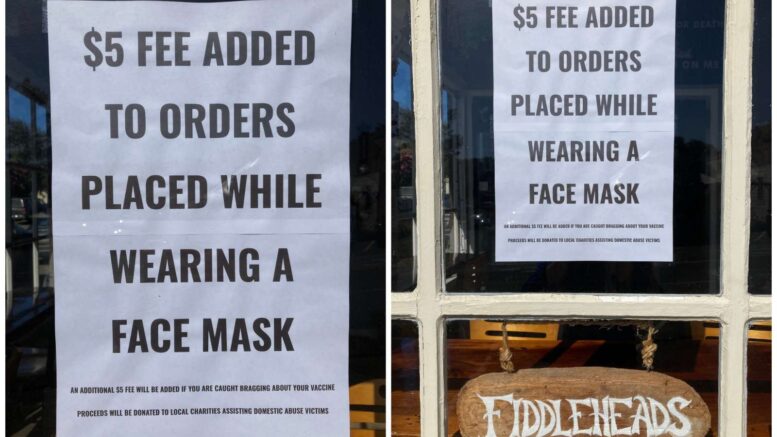 Fiddleheads Cafe is located at 10450 Lansing in Mendocino. The restaurant posted signs on May 24 that said patrons would be charged an additional $5 fee for wearing face masks.Courtesy Chris Castleman / Fiddleheads Cafe

Please Share This Story!
PDF 📄
You will pay another $5 if you are caught bragging about your vaccine. Proceeds are donated to a local domestic abuse charity.  Mendocino, California is an artsy, new age enclave full of Sustainable Development environmentalists and many residents are totally triggered. The owner says they can choose who they support. ⁃ TN Editor

Patrons are free to say what they wish at a California cafe, but doing so while wearing a mask will cost them $5.

On Sunday, Fiddleheads Cafe in Mendocino put up a sign stating the fee for those who wear a mask while ordering, NBC News reported Friday.

In March, the establishment announced a 50 percent discount for people who threw their masks in the garbage, according to owner Chris Castleman.

“I don’t think $5 to charity is too much to ask from mask wearing customers who claim to care so much about the community they live in,” he told the outlet in an email.

The proceeds will be given to Project Sanctuary, a domestic abuse organization, for two weeks before another nonprofit is put into the rotation, according to Castleman.

“It’s about time that the proponents of these ineffective government measures start paying for the collateral damage they have collectively caused,” the owner continued.

The eatery also reportedly planned to charge an additional $5 for those “caught bragging” about receiving the vaccine, some of the posted signs read.

According to NBC Bay Area, Castleman said a few people paid the $5 fee while others were shocked and angered.

“Customers either love it or hate it,” he told the outlet in an email:

There are people who refuse to pay it; I guess a $5 donation to charity is too much for them. Others have gladly paid it knowing that it goes to a good cause. I don’t force anyone to pay, I give them the freedom of choice, which seems to be a foreign concept in these parts of the country.

In June, Castleman temporarily closed the business once Mendocino County officials warned masks were not optional at restaurants during the coronavirus pandemic.

He abided by the temporary mandates regarding curbside service, but requiring masks for servers and other employees, he argued, was over the top.

“I don’t believe in mask-wearing,” Castleman explained. “Our customer base has been strongly aligned with our beliefs, but I think some are really angry at our cafe.”

“It’s their choice,” he noted. “They can choose what business they support. They can go to any other business in my county, state.”

Funny!! And I support this! Don’t LIKE it?? Go else where!! lolol

Yep. Putting their money where their mask goes is not in their ‘belief system’. A faulty one. You go guys! Love it!

Brilliant. If you chose to wear a mask, sobeit. Just don’t impose your nonsense other people who chose not to.