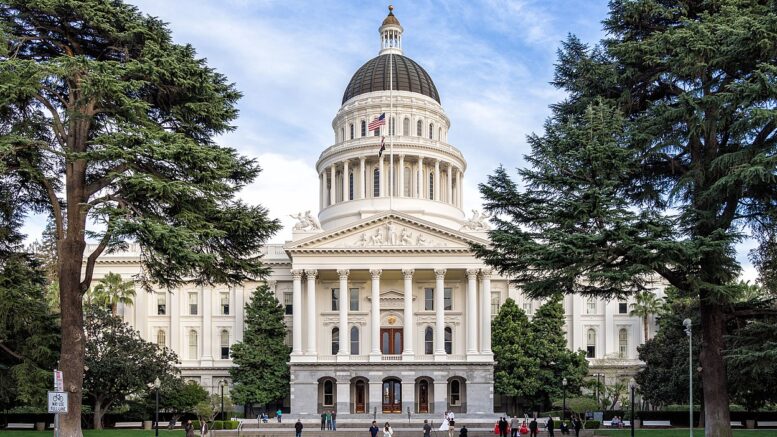 Please Share This Story!
PDF 📄
California continues to drift toward lawlessness as Governor Newsom ignores the will of the state legislature and the citizenry, and writes Executive Orders to achieve his ultra-radical green agenda. ⁃ TN Editor

Two bills would have established new land, water, and ocean protection goals, including to protect 30 percent of the state’s land areas and water by 2030.

In Section 1 of the bill, there were 18 legislative findings and declarations, including that “access to public land, nature, and a healthy environment should be a right for all people…” Also, “the Natural Resources Agency has made environmental justice and tribal consultation a priority…” Moreover, “scientists are documenting a rapid loss of natural areas and wildlife in California.”

Also, “California should protect land, water, ocean, and wildlife in the state as necessary to prevent the further decline of nature. This act is not intended to undermine the Fish and Game Commission’s authority in managing the public trust resources of the state. Conserving and restoring nature is one of the most efficient and cost-effective strategies for fighting climate change. The implementation of this policy includes promoting voluntary cooperation with private land owners.”

In Section 2 of the bill, Section 9001.6 would have been added to the Public Resources Code. Subdivision (a) defined the terms “protect” and “protection.” Subdivision (b) provides that “it is the goal of the state to protect at least 30 percent of California’s land areas and waters and to help advance the protection of 30 percent of the nation’s oceans by 2030, inclusive of existing protections afforded by state and federal laws and regulations.”

Subdivision (c) specifies that it “is further the goal of the state to support regional, national, and international efforts to protect at least 30 percent of the world’s land areas and waters and 30 percent of the world’s ocean by 2030.” Subdivision (e) permits the state to “achieve the goals established in this section through activities that include, but are not limited to, any of the following:

Subdivision (f) requires the Natural Resources Agency to ensure that actions made in furtherance of this section are conducted in a manner that incorporates the agency’s environmental justice and tribal consultation policies, including subsequent updates to those policies, into relevant program planning, development, and implementation decisions. Finally, subdivision (g) specifies that this section does not undermine, limit, contravene, or modify any other law or regulation in effect on January 1, 2021.

In Section 1 of the bill, there were over a dozen legislative findings and declarations, including that “climate change is causing historic droughts, devastating wildfires, torrential storms, extreme heat, the death of millions of trees, billions of dollars in property damage, and threats to human health and food supplies. The state’s forests, agricultural and ranch lands, wetlands, oceans, and other natural and working landscapes define the beauty and well-being of our state, but tragically are suffering increasing degradation caused by a changing climate.”

Moreover, “While the state’s natural and working landscapes confront impacts from climate change, they continue to provide a valuable carbon sequestration service that can help the state meet its long-term climate, public health, environmental, and economic goals.” It also noted that the state has taken a number of specific steps to reduce greenhouse gas emissions.

Section 2 of the bill, Section 38561.5 would have been added to the Health and Safety Code. Subdivision (a) would have added definitions for the terms “natural lands” and “working lands.” Subdivision (b) would have required, as part of the next update to the scoping plan prepared, the state board, in collaboration with the relevant state agencies and departments, to do all of the following:

In addition, “WHEREAS California’s rich biodiversity is increasingly threatened by loss of habitat, spread of invasive species, decreasing water supplies, and increasingly frequent and severe climate impacts.” Also, “WHEREAS as we work to mitigate greenhouse gas emissions, we must also accelerate actions to enable the State to adapt and become more resilient to the impacts of climate change, including expanding nature-based solutions – the use of sustainable land management practices to tackle environmental, social and economic challenges.”

I hate to sound like a pessimist. But I have no delusions why the United States is falling and can’t rise back up. It doesn’t seem to matter how many politicians, citizens or judges try to vote the right people in office, or vote for laws that may bring freedom and prosperity. It seems to me that we are outnumbered by those who love tyranny and enslavement. I do my best to retain my liberty, prosperity and blessings in Christ as many others do. We know not to expect anything from tyrants and control freaks except for misery and destruction.

What a load of AGENDA 2030, and they have the aul to blame climate change on all the fires (DEWs) droughts floods and ever other weather warfare by the deliberate spraying of our skies 24/7 with poisons and keeping natural weather fronts at bay by HAARP. All this to clear people OFF the lands and drive them into notsoSMART Cities, to rent stack and pack cells, as owning property is not allowed, or owning a car, of any kind, you can rent one, electric, which will take you anywhere the programming of its computer will allow you to go, plus… Read more »