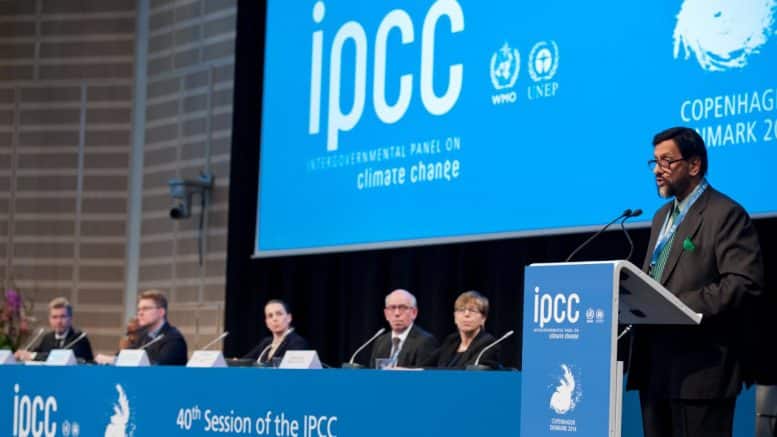 Everyone is calling for another Commission of Inquiry (CI) or Special Prosecutor to investigate FBI and DOJ involvement in the election of Donald Trump. I used to think a CI, or any government commission, was a wonderful vehicle for taking the politics and most of the emotion out of an issue. I believed, like most, that finally, the public will get an independent examination and complete exposure of all the issues and facts necessary for a reasoned decision. That was the illusion behind the formation of the Intergovernmental Panel on Climate Change (IPCC). This was a UN Commission of Inquiry set up supposedly to study climate change and examine all sides of the claim that humans were causing global warming.

I say I used to think CIs were good things until I was appointed to one. It involved disputes over a large lake and like all water issues was very contentious. The politician wanted a certain outcome but did not want public disclosure. By appointing the CI, he took himself out of it because he deferred any questions from anyone, including the media. He also gave himself complete control of the outcome without most of the public being aware. He went back to his bureaucrats, and between them, they wrote definitions and terms of reference that limited the Commission’s inquiry, so it pre-determined the outcome. What I learned was that they are perfect vehicles of Inquiry for the politician because they provide almost total control. For a start they can reject all media inquiries until the Commission reports.

When presented with these terms of reference I was astounded because they didn’t even give us access to basic data necessary to reach a proper solution. I told the Commission Chairman that unless we received access to everything, I would advise the media that the politician was trying to guarantee the outcome he wanted. He decided that was a bigger political embarrassment (threat) and released everything. We discovered that there were three previous inquiries, one over 100 years old, that outlined the problems of the lake, yet nothing was ever done. The previous Commissions deflected the political heat until the politician’s career was over. Some call this ANIMTOO, or “Absolutely not in my term of office.”

The internet is certainly the biggest generator of conspiracy theories, and the one that dominates them involves the assassination of President John Kennedy. I know why. I saw a TV interview with US Supreme Court Chief Justice Warren. He was asked why he didn’t investigate the connections between Jack Ruby and the Dallas Mafia in the shooting. He calmly replied it wasn’t in my terms of reference. I knew what he meant but most didn’t. The outcome was pre-determined, and the conspiracy theory engendered.

The IPCC was set up to prove that human produced CO2 was causing global warming. They needed a pre-determined result. It was achieved by the definition of climate change and the terms of reference they were given by Maurice Strong through the bureaucrats of the United Nations Framework Convention on Climate Change (UNFCCC). Article 1 of the document presented publicly at the 1992 Rio conference provided this definition.

a change of climate which is attributed directly or indirectly to human activity that alters the composition of the global atmosphere and which is in addition to natural climate variability observed over considerable time periods.[1]

The problem is you cannot determine the human effect if you don’t know how much climate changes naturally or the mechanisms of change – we know very little about either.

This narrow definition is why the entire focus is on CO2, even though it is only 4 percent of the total greenhouse gases. Figure 1 was taken from the ABC news web site a few years ago and illustrates the false information that resulted. 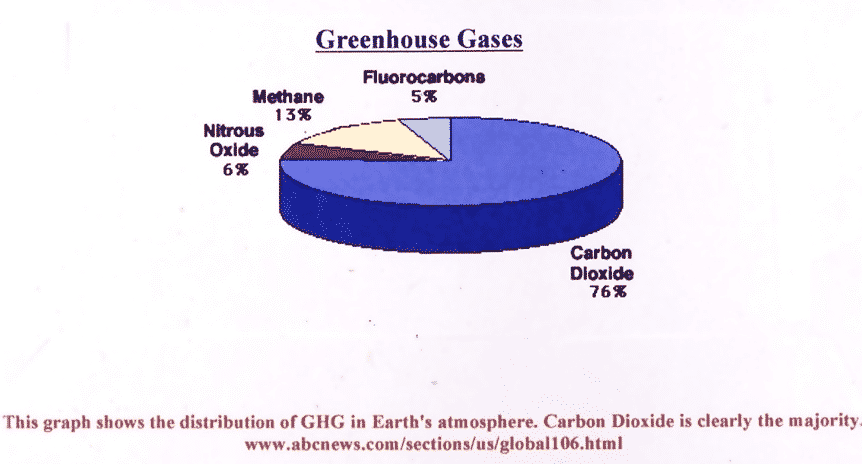 In the caption, it says, “Carbon dioxide is clearly the majority,” and technically that is correct, but only in the diagram. The problem is the diagram heading says “Greenhouse Gases,” but it omits water vapor (H2O), which is 95 percent of the greenhouse gases. The IPCC get around this problem by saying that while humans do produce water vapor, the amount is so small it is insignificant to the total. The problem is we don’t know how much water vapor is in the atmosphere or how it varies over space and time. It is likely that even a 2 percent natural variation in water vapor will cause more change than the total CO2 effect.

This narrow focus is reflected in the IPCC Summary for Policymakers (SPM) that shows the human affected variables they consider because of the definition (Figure 2). Notice they list and consider only 11 variables and of them, only two have a very high level of confidence, but that is their measure. 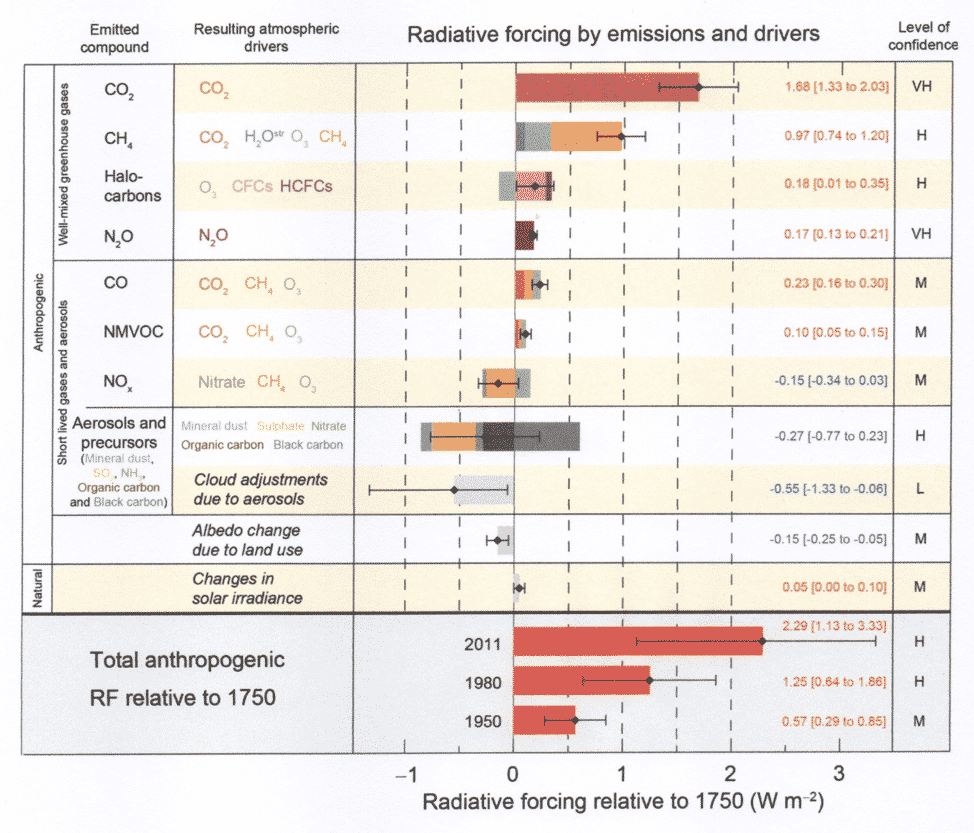 Further evidence of the effectiveness of the IPCC narrow focus appears in a Yale University Department of Education study of public knowledge about climate change. Figure 3 shows the results of the question, “Which of the following gases are good at trapping heat from the Earth’s surface?” It is not surprising that the overall result of this high school test of climate knowledge was that 25% scored D and 52% an F. 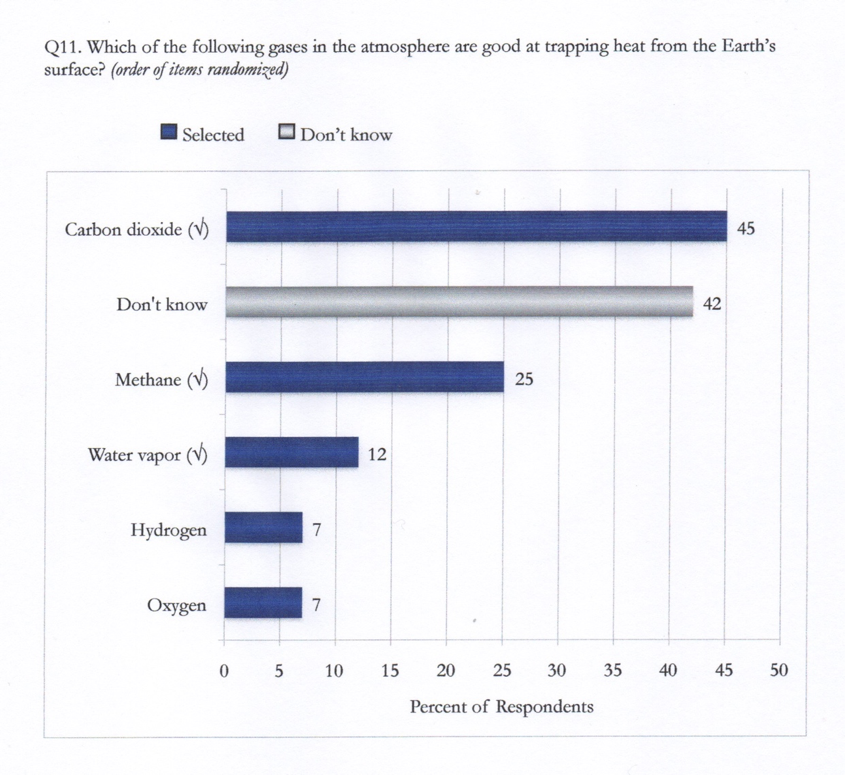 The UN IPCC Commission of Inquiry achieved its results like almost all the others. It defined the terms of reference to pre-determine the political outcome required. It identified CO2 from industrialized nations as the cause of global warming. This was the justification required to punish them financially and transfer their wealth to developing nations and restrict their growth. As Ottar Edenhofer, co-chair of the IPCC Working Group GIII from 2008 to 2015, explained.

I say “almost all” because there is another form of Inquiry that takes a completely different approach. It carefully selects the person to head the Inquiry who they believe will bring in the desired result. That person also chooses the members of the Inquiry team. They know you can always find something wrong and inflate or distort it if required. If all else fails, you can make it up.  In this scenario, they set no limits to the investigation by definition or terms of reference. You can name your own recent example of such an Inquiry.