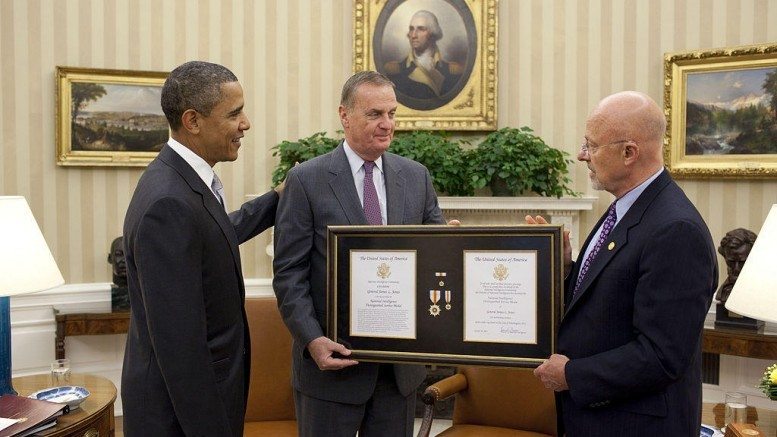 TN Note:In January 2014, Congressmen called for the firing of James Clapper, the Director of National Intelligence because he lied and intentionally misled Congress on collection of data on American citizens. Clapper directly manages   all 16 federal intelligence agencies.

Even though the bulk collection of Americans’ telephone records has ended, calls and emails are still being swept up by U.S. surveillance work targeting foreigners. Congress is making a renewed push to find out how many.

Six Republicans and eight Democrats on the House Judiciary Committee have asked the nation’s top intelligence official for the number of Americans’ emails and phone calls collected under programs authorized by Section 702 of the Foreign Intelligence Surveillance Act.

The programs target foreigners, but domestic communications sometimes are vacuumed up as well. They were first revealed to the public by Edward Snowden, who leaked files from the National Security Agency.

“Surely the American public is entitled to some idea of how many of our communications are swept up by these programs,” the committee members wrote in their April 22 letter to Director of National Intelligence James Clapper.

They weren’t the first to request the information.

In the past five years, Democratic Sens. Ron Wyden of Oregon and Tom Udall of New Mexico have asked repeatedly. Last October, a coalition of more than 30 civil liberties groups wrote Clapper seeking the information. Unsatisfied with the answer they received, they wrote him again in January.

Intelligence officials have tried to assuage concerns of Congress and others by saying that any domestic communications collected are “incidental” to the targeting of foreigners. They say Section 702 allows the government to target only non-U.S. persons reasonably believed to be located outside the United States. They say the law explicitly bars the government from targeting a foreigner to acquire the communications of an American or someone in the U.S. But they say intelligence agencies are authorized under Section 702 to query communications made with U.S. persons under certain cases with certain approvals.

Late last month, Clapper said intelligence agencies are looking into several options for providing an estimate and will do their best to come up with a number.

“This tool is a terrific producer of critical intelligence for this country and our allies,” Clapper said recently about continued need for Section 702 programs.

He did not say how soon an estimate could be released and cautioned that “any methodology we come up with will not be completely satisfactory to all parties.”

Congress Members are such spineless Wimps that they are afraid of their own Shadow. Look at these weasels, they are very good at taking orders from their handlers & Taught to Obey. All Brain Dead Members strutting Around like they are somebody but they are nothing but the lowest elements in our society. Their Approval rating is around 5 now. Is that something to be proud of?