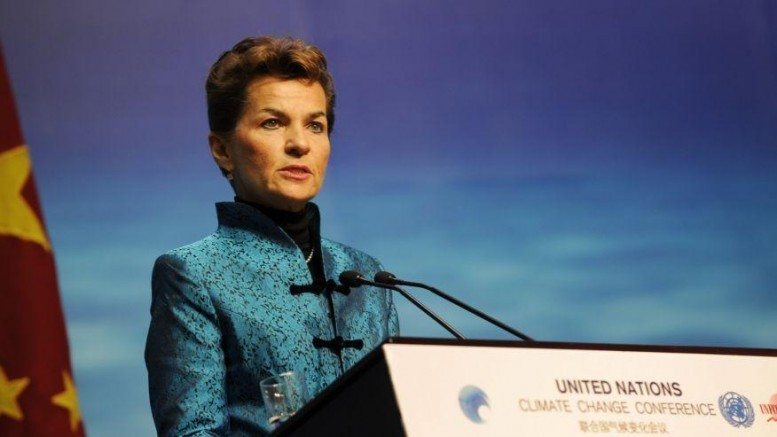 Please Share This Story!
PDF 📄
TN Note: The late Joan Bavaria had a “vision for building a sustainable economy”, aka Sustainable Development, Green Economy or Technocracy. This is the same economy that Figueres pledges to install after driving Free Enterprise and Capitalism into oblivion. The only alternative economic system ever created was Technocracy in the 1930s.

Christiana Figueres, the executive secretary of the United Nations Framework Convention on Climate Change (UNFCCC), has been awarded the Joan Bavaria Award for Building Sustainability into the Capital Markets. The announcement was made today at the Ceres Conference 2016 at the Park Plaza Hotel in Boston.

The award is given annually by the nonprofit group Ceres and Trillium Asset Management to honor an inspiring global leader working to move capital markets toward a system that balances economic prosperity with social and environmental concerns.

The groups selected Figueres for her leadership in bringing together governments, corporations, investors, communities of faith and nonprofit groups to achieve a historic global climate change agreement, forged by 195 countries, in Paris. Figueres has been credited with forging a remarkable, new brand of collaborative diplomacy that enabled the agreement, which was signed by 175 countries April 22.

“I am incredibly honored to receive this award and recognition,” Figueres said. “But I could not have done this work without the support of organizations, like Ceres, that played a major role in mobilizing businesses, investors and civil society at large to support the Paris Agreement. It was truly a global effort.”

Throughout the negotiation process, Figueres focused on the economic opportunities of tackling climate change, which helped engage more companies and investor partners than ever before.

“Building investor and corporate support was a key ingredient in emboldening governments to act in Paris,” said Ceres president Mindy Lubber, who attended the climate talks. “Figueres understands the importance of getting investors and other financial players into the mix in tackling climate change. She also understands the profound economic ripples of this issue, which enabled her to build unprecedented support from many of the world’s largest companies and investors.”

Figueres began leading the international climate change negotiations after the Copenhagen talks in 2009. As Executive Secretary, Figures was determined to take the negotiations forward in the hope of securing a universal climate change agreement supported by developed and developing countries alike. Over the next five years, she led a series of successful UN Climate Change Conferences, starting with Cancun in 2010 and culminating with the historical and much celebrated Paris Agreement in December 2015.

The award honors the memory of Joan Bavaria, a pioneer of social investing who founded Ceres and Trillium Asset Management. Past winners include: Geeta Aiyer, Founder and President of Boston Common Asset Management; Sister Patricia Daly, OP, executive director of the Tri-State Coalition for Responsible Investment; Tessa Tennant, President and co-founder of The Ice Organisation; and William Foote, founder and CEO of Root Capital.

“In the spirit of Joan Bavaria, for whom this award is named, Figueres has shown great leadership towards balancing environmental needs and economic prosperity when it comes to climate change,” said Matt Patsky, CEO of Trillium Asset Management. “Her ability to achieve global consensus on one of the most important issues of our time is true to Joan’s vision for building a sustainable economy.”

In addition to the Joan Bavaria Award, Figueres has also received the Grand Medal of the City of Paris, the Ewald von Kleist Award from the Munich Security Conference, the 2015 Guardian Medal of Honour, the 2015 Hero of El Pais newspaper in Spain, and the 2016 Solar Champion Award from California’s Vote Solar. The Nature Journal of Science listed her first on the list of 2015 Top 10, Foreign Policy Magazine recognized her as the 2015 Global Thinker, and in 2016 Fortune magazine listed her number seven of the World’s 50 Greatest Leaders, the only female Latin American to be listed.