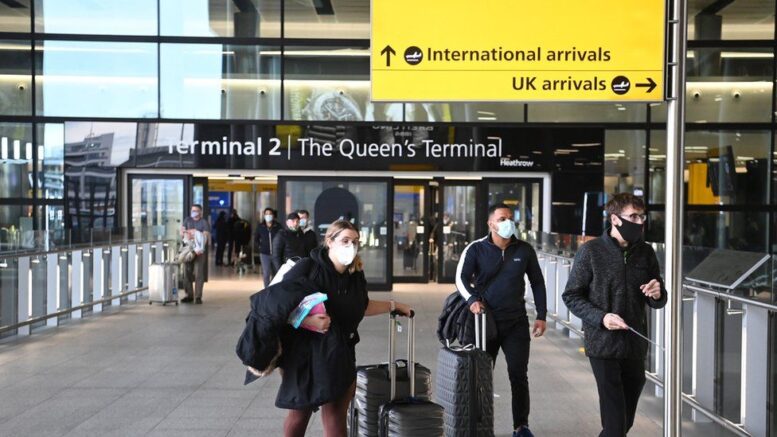 Please Share This Story!
PDF 📄
The police state is getting lots of proving ground out of COVID-19. Great Britain is so paranoid that someone might lie about their travel origin, that you could face a 10 year prison sentence for lying about your country of origin. ⁃ TN Editor

A maximum 10-year jail term for lying about recent travel history has been defended by the government.

Transport Secretary Grant Shapps said the British public “would expect pretty strong action” and the maximum sentence reflects the seriousness of the crime.

From Monday, people arriving in England from “red list” countries must isolate for 10 days in hotels, costing £1,750.

It follows concerns that existing vaccines being rolled out in the UK may struggle to control new virus variants identified around the world.

Meanwhile, Mr Shapps said people should not be booking holidays either in the UK or abroad, and that it was “too soon” for sun-seekers to plan getaways.

“People shouldn’t be booking holidays right now – not domestically or internationally,” he told the Today programme, prompting the travel industry to warn of another lost summer.

It comes as Prime Minister Boris Johnson told MPs the public would need to “get used to the idea of vaccinating and then re-vaccinating in the autumn” due to new variants.

And, speaking at Prime Minister’s Questions, he said the hotel quarantine plan was “measured” and “proportionate”.

Writing in the Daily Telegraph, Lord Sumption accused Health Secretary Matt Hancock – who announced the latest measures – of losing his connection with reality.

“Ten years is the maximum sentence for threats to kill, non-fatal poisoning or indecent assault,” he wrote.

“Does Mr Hancock really think that non-disclosure of a visit to Portugal is worse than the large number of violent firearms offences or sexual offences involving minors, for which the maximum is seven years?”

He told BBC Radio 4’s Today programme: “The reality is that nobody would get such a sentence anyway, the courts are simply not going to impose it.

“Now I recognise that the government has to put down strict rules and needs to have penalties to enforce them.

“But to suggest that a 10-year sentence is going to result from a false declaration on a form on landing at Heathrow Airport is, I think, a mistake because it is exaggerated, it is not going to happen.”

Failing to quarantine in a designated hotel after arriving from a “red list” country will carry a fine of between £5,000 and £10,000.

The 10-year jail term would be the maximum penalty for anyone found to have falsified their travel history on the mandatory passenger locator form filled in by travellers when they arrive in the UK.

Downing Street said MPs will not be asked to vote on the plans as the government will be including the restrictions under the Forgery and Counterfeiting Act 1981.

Asked about harsh penalties attached to the new measures, Mr Shapps told BBC Breakfast those who are fined as much as £10,000 would have to “go out of their way to lie and cheat” the new system.

“I think the British public would expect pretty strong action” for those who seek to evade hotel quarantine, he said.

Around 1,300 people a week are arriving into the UK from the 33 red list countries – including Portugal, Brazil and South Africa – at the moment, Mr Shapps said.

Britain look day by day , like one of Mengele’s Death Camps !. Mr. Hancock is experimenting a huge prison-laboratory as i’ve seein in a sf(not anymore sf) movie !

Please set aside 1 hour to educate yourself before you take any covid vaccine:

Bill Gates’ father was a eugenicist who wanted depopulation and his son is now moving forward with his agenda as proven in this 44 second video:

Please listen to this 30 second video where Bill Gates brags about how much he will profit while those who take his vaccines get to play Rush ‘n’ Roulette!:

Is your soul worth trusting in men?:

Pretty good links except for the last one. America is not Babylon. I always get suspicious when people take a bunch of scriptures and mingle them together to get them to mean something else that the author wants you to believe, just like a cult would to get followers to follow after them. Why is it his name is hidden so we can’t check him out? It is best to take the Bible itself in its literal entirety so you can get a correct picture from God because man is deceitful.

Gotta share a quote from your last link: “As sons of God we are all “deities” which are “gods” under our shepherd Jesus”: THAT IS A LIE! This must be a Mormon website. Lies have to be exposed. This site also does not believe in the Trinity. Mormons believe the trinity is 3 different gods, that is why they believe they too will be gods living on a planet called Kolob where they will continue to have spirit babies forever. And why they believe they can have so many wives in Utah.