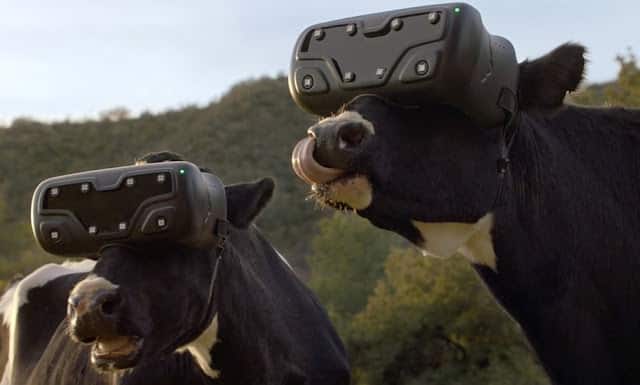 Please Share This Story!
PDF 📄
Animals may beat a path to the Metaverse before people. Technocrats have found that animals can be tricked into a false reality in order to modify bodily functions, which for cows is producing more milk. If the theory holds true for humans, then their “output” can also be manipulated for economic gain. ⁃ TN Editor

A farmer has turned to virtual reality headsets to make his cooped-up cows think they’re outside in a meadow.

Izzet Kocak, from Turkey, has turned to the high-tech headgear after seeing a study suggesting it makes the cows happier. This, in turn, means they produce more milk.

Kocak says the move is already paying off. He’s given the headsets to two of his cows and noted that milk production went up from 22 litres to 27 litres a day.

And what are the cows seeing through the VR goggles? Apparently, it’s visions of the outside world.

‘They are watching a green pasture and it gives them an emotional boost. They are less stressed,’ he said.

Izzet has previously used classical music to try and soothe his cattle. But he says he’s been so impressed with the headsets, he plans to buy ten more of them.

The headsets were developed with vets and first tested on a farm in Moscow.

Farmers worked with developers, vets and consultants at the Krasnogorsk farm near Moscow, to beam the cattle a simulation of a summer field.

To make the imagery work, IT specialists needed to tweak the colour palette in the software to make it suitable to the animal’s unique vision. Cows can’t see red or green – they’re only able to perceive dull shades of yellow and blue.

But the Russian Ministry of Agriculture is convinced the trick does work. In a statement in 2019, officials said: ‘environmental conditions have a significant impact on cow health and, as a consequence, the quality and quantity of milk produced.’

it’s TECHNOCRACY that will rule.

Environmental circumstances have an impact on every living thing. This is SO sad. Just like humans. Instead of making the world a beautiful place the Technocracy wants a slavery system that TRICKS humans and animals into a ‘belief’ when the reality is stick and twisted.

This is animal abuse pure and simple! Where is PETA!

Sureee :))) and if you eat meat its not abuse? Dude use your brain.

I was being facetious! P.E.T.A. people eating tasty animals.

The MATRIX for cows! They may see the grassy meadow, but we won’t get the benefit of grass-fed milk.

The One will save them.