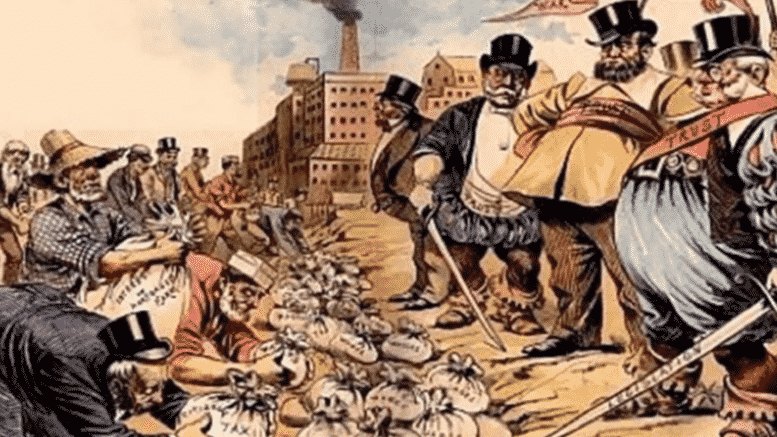 Monopolists of the industrial revolution

Please Share This Story!
PDF 📄
Google is using every available tool and technology to crush its competitors and maintain its dominance in extracting behavioral surplus from humanity. In the 1800s, oil was extracted from the earth; now, Technocrats digitize and extract human behavior for the certainty of control and manipulation. ⁃ TN Editor

Google is already facing mounting legal challenges from regulators globally who accuse the tech giant of maintaining an illegal monopoly over its search and digital advertising businesses.

But now one of its most prominent rivals is alleging that the titan is abusing browser extensions to favor its products and stifle competitors, adding a new wrinkle to the high-stakes antitrust debate and momentum to calls for new regulation.

According to DuckDuckGo, Google for years has used misleading notifications to lure users into disabling its rival’s browser extensions and to discourage them from switching their default search engines on its web browser, Chrome. But Weinberg said Google in August 2020 tweaked the prompts to more blatantly nudge users away from jumping ship.

The changes include requiring users to answer whether they would rather “Change back to Google search” after adding the DuckDuckGo extension and showing users a larger, highlighted button when giving them the option to “Change it back” or not.

Weinberg said the tweaks — although subtle — have had a major impact.

Since Google implemented the changes, DuckDuckGo said it has seen a significant drop — 10 percent — in how many new users it has been able to retain on its services on Chrome. DuckDuckGo said that has translated to hundreds of thousands of new users lost. (Chrome is the world’s most prevalent desktop browser by a wide margin.)

It’s the first time the company is publicly speaking out about how the practice has impacted its business, including what it says are millions in potential lost revenue since Google changed its prompts in 2020.

“For search engines like us that are trying to actively allow consumers to switch, [or] choose an alternative, they’re making it unreasonably complicated to do so and confusing consumers,” Weinberg said of Google.

Google spokeswoman Julie Tarallo McAlister said in a statement that Chrome users “can directly change their default search settings at any time,” but they often complain “when they download an extension that unexpectedly changes these settings without their knowledge.”

She added, “This issue has been well-documented for a long time and is why we have long had clear disclosure requirements for extensions and shown users a notification if any extension tries to change their search settings — as a way to confirm their intent.”

McAlister said the notification appears “regardless of the user’s chosen search provider,” and that some other browsers have “similar policies.”

Weinberg said he hopes by speaking out about the tactic it will strengthen calls for bipartisan antitrust legislation under consideration on Capitol Hill to ban major platforms from prioritizing their own products and disadvantaging rivals.

The proposals are just some of the numerous bills targeting what U.S. lawmakers say are anti-competitive abuses by companies like Google. But the bills, spearheaded by Sen. Amy Klobuchar (D-Minn) and Rep. David Cicilline (D-R.I.), boast broad backing from Democrats and Republicans, making them among the most threatening for Silicon Valley giants. They’re seen as bellwethers for the larger antitrust push.

Weinberg said the drop in user retention via their extension on Chrome, which was previously unreported, is one of the most “direct” pieces of evidence they have seen about how Google’s practices have harmed their business.

The problem is non-enforcement.
Of anti-trust laws.
And this comes from our “duly elected” representatives who are governing according to the will of their constituents-and their pocket books.

[…] site and has been accused by one of its few competitors, the much smaller Duck Duck Go, of manipulating browser extensions to drive customers from rival products. Apple continues to place strict […]

Google: Whatever Happened to ‘Don't Be Evil’? - words in lines

Google: whatever happened to ‘Don’t be evil’? – Spiked | Gogo Georgiev

Google: Whatever Happened to ‘Don't Be Evil’? - newgeography.com - Gossip Buz