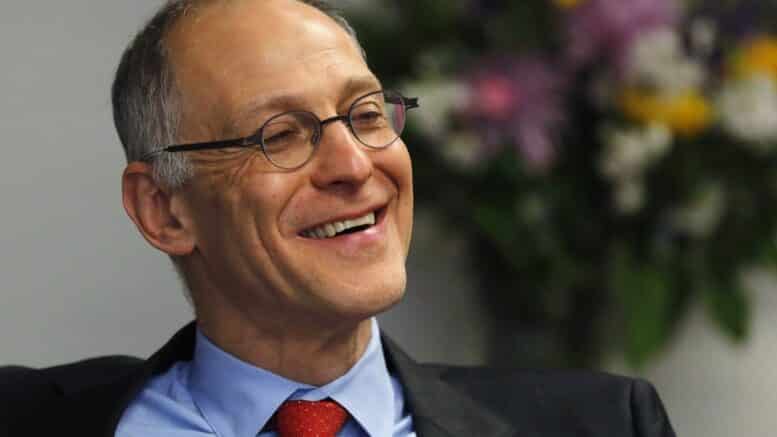 Please Share This Story!
PDF 📄
This is a MUST-READ article. Medical technocrat Ezekiel Emanuel, brother to political hack Rahm Emanuel, famously said he hopes to die at age 75. Currently 64, he has 11 years left. Now he is advocating for a permanent medical Technocracy by aggregating all respiratory diseases into a single statistic so that the government can declare perpetual health emergencies.

While most would laugh Emanuel out of the room, it would be foolish because he is incredibly influential. Notably, he was the chief architect of Obamacare, the most disastrous health legislation in history. He is currently the Vice Provost for Global Initiatives at the University of Pennsylvania and sits on Biden’s COVID-19 Advisory Board. He is also a senior fellow at the radical Center for American Progress chaired by Trilateral Commission superstar John Podesta. ⁃ TN Editor

Sooner or later COVID will wane and probably become endemic — that is, part of life, like the flu. And with that, the newfound power of public-health technocrats would wane.

They know this, and it does not make them happy. So, advocacy has commenced to establish a “new normal” — gosh, I hate that term — that would not restore society simply to a state of accepting respiratory illness as a part of life, but rather, keep us continually obsessed with the presence and prevention of illness.

Toward this end, bioethicist Ezekiel Emanuel and two co-authors wrote three advocacy columns in the Journal of the American Medical Association. Space does not permit a full recounting. But they are free, so all readers can access them by hitting the links provided.

First, they accept that the current policy of “no COVID” cannot be accomplished. True.

Then, they argue that our response to COVID becoming endemic should be to treat all respiratory ailments as one thing by aggregating statistics. From, “A National Strategy for the ‘New Normal” of Life with Covid” (my emphasis):

The point of that, obviously, would be to keep society terrified. Because if public health officials continually announce aggregate respiratory disease statistics that combine all “cases” of flu, pneumonia, and other respiratory diseases — along with the hospitalizations and deaths they cause — our media hysterics would keep us in a state of constant fear toward empowering our public health technocrats to impose repeated “emergency” measures to “keep us safe.”

And just think what the teachers’ unions would do with that! Our poor children.

Do you think I am being paranoid? The authors admit the purpose:

Even though seasonal influenza, RSV, and other respiratory viruses circulating before SARS-CoV-2 were harmful, the US has not considered them a sufficient threat to impose emergency measures in over a century. People have lived normally with the threats of these viruses, even though more could have been done to reduce their risks.

We can’t have that!

The authors want a “peak week threshhold” established — based on statistics prior to COVID which would be lower than now — that would permit public health officials to swing into gear:

This peak week risk threshold serves at least 2 fundamental functions. This risk threshold triggers policy recommendations for emergency implementation of mitigation and other measures. In addition, health systems could rely on this threshold for planning on the bed and workforce capacity they need normally, and when to institute surge measures.

See what I mean?

The authors would then use the fear generated to force massive investments in public health infrastructure and increased bureaucracies. The end result would be health technocracy without end.

The second column further illustrates the above point. From, “A National Strategy for COVID-19: Testing, Surveillance, and Mitigation Strategies:”

In the third column, the authors support draconian vaccine mandates. From, “A National Strategy for COVID-19 Countermeasures:”

The government should accelerate efforts to develop a universal coronavirus vaccine to protect against known coronaviruses, including SARS-CoV-2. A more broadly protective vaccine would allow the world to limit the effects of emerging variants and nimbly react to novel coronaviruses that are likely to emerge in the future. There may be tradeoffs between increased breadth of protection against severe disease and reduced effectiveness against infection…

To facilitate verification of vaccination status and to better track postvaccination infections, there needs to be an electronic vaccine certificate platform. Relying on forgeable paper cards is unacceptable in the 21st century. Current state immunization information systems are incomplete, fragmented, and not interoperable, hindering national efforts to control the virus. A national electronic vaccine certificate platform is needed, such as the SMART Health Card, that ensures interoperability across states and countries, safeguards individual privacy, and is based on open-source technology publicly available for vetting to help satisfy any concerns over government surveillance.

While controversial, this is not unprecedented. State and national databases are in use for other information, including for driver’s licenses, Social Security, voter registration, and specific health purposes, such as organ donation.

Strict guidelines will protect against abuse! Given what they wrote about aggregating all respiratory illnesses as one danger, their prescription would not be limited to COVID.

Again, don’t take my word for it:

There has been tremendous progress in rapidly creating novel COVID-19 vaccines and therapeutics. Nevertheless, these efforts have been insufficient to achieve a “new normal,” in which the combined risk of all viral respiratory illnesses, including COVID-19, does not exceed the risk during pre–COVID-19 years. The US needs investment in variant-specific vaccines, alternative vaccine administration mechanisms, and research into the optimal vaccination strategies. Having effective vaccines are of real value in reducing the spread of COVID-19 and serious illness, but their benefits will be limited without near universal coverage.

No one opposes the keeping of statistics, proper monitoring of diseases, development of new vaccines and therapeutics, improving ventilation at schools and workplaces, and creating greater access to testing and effective masks for those who want them.

But these authors are after much bigger game than that. They are paving the way for imposing a public-health technocracy on society that would use continual emergency declarations — based on aggregate peak week respiratory illness statistics — to constrain personal freedom in the name of preventing illness.

A lot of people will be happy to embrace this nightmare judging from the way they’ve acted the past two years.
I have quit communicating with most. They view me as a walking plague carrier because their TV’s told them to.
I view them as mindless, heartless, soulless puppets of the forces of evil. Not to mention faceless.
Mass formation is a choice.

When people stop believing in God, they don’t believe in nothing; they believe in anything. The hypnotized are people who have no meaning in their lives and look to science, officials, and experts as their substitute messiahs. It is essentially idolatry. There was a reason for the century-long Communist/Globalist plan to remove God from society, and this is it.

Thanks for posting Smith’s article. Please post more of his stuff. In fact, his books are something you could publicize here. They raise awareness of eugenics.

There are two kinds of people in the world: those who have a conscience and those who don’t. The ones who don’t have all the levers of power and and the ones who do are sitting silent afraid of their own shadow. You all need a healthy dose of COURAGE. Do you enjoy being abused? Are you all masochists?

The permanent medical technocracy is already here. They have already aggregated all the respiratory diseases under the Covid umbrella … at least in Romania, where I live …:-(

[…] >Obamacare Architect Ezekiel Emanuel Is Pushing For Permanent Medical Technocracy: This is a MUST-READ article. Medical technocrat Ezekiel Emanuel, brother to political hack Rahm Emanuel, famously said he hopes to die at age 75.  Currently 64, he has 11 years left. Now he is advocating for a permanent medical Technocracy by aggregating all respiratory diseases into a single statistic so that the government can declare perpetual health emergencies.  While most would laugh Emanuel out of the room, it would be foolish because he is incredibly influential. Notably, he was the chief architect of Obamacare, the most disastrous health legislation… Read more »

“People have lived normally with the threats of these viruses, even though more could have been done to reduce their risks.”

Foe example, improve your immune system with Vitamin D3 (preferably from exposure to the Sun). Quercetin zinc vitamin C. As for Covid-19: Ivermectin Hydroxychloroquine and most of all CDS (chlorine dioxide solution). I used CDS to cure my stage 4 prostate cancer in ninety days. I use it for detox and for regular health maintenance. It also is very effective at treating Covid-19.

CDS has cured me too Andy, and what you say is true. Being consistent is key, and that works with so many other aspects of life too. Funny how ppl even reject you helping them about how to fix themselves..easily!…oh well. This only proves that the implementation of more health Technocracy by the eugenists/emanuel types is the same thing as saying “we are going to be stealing education away from all of you and you must do as we say. You will remain stupid..and sick.” Thats their big genius plan. lol Good job of taking care of yourself Andy. Let… Read more »

Thank you Patrick for pointing out this read.
It is very revealing. These madmen are far from done.

Hungry? DARPA funding creation of “3D printed food from ‘mixed waste’” (and much more from SAMIZDAT) – NEWS FROM UNDERGROUND

How Many Shots Does It Take? – Area Man on Fire

[…] have their own panic button to press. (Read all about it here; link to paper provided in the text: https://www.technocracy.news/wesley-j-smith-ezekiel-emanuel-is-pushing-for-permanent-medical-technoc&#8230;.)    But I digress… (Not really.)The point I’m trying to make here is that these admissions […]