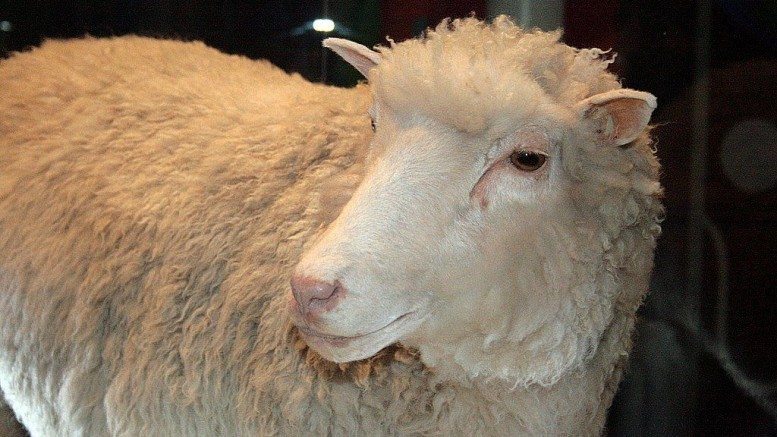 TN Note: Cloning started with animals. The first high-profile clone was a sheep named Dolly. In the last 20 years,  Transhumans have latched onto cloning technology as a pathway to immortality.

Two decades after Scotland’s Dolly the sheep became the first cloned mammal, consumers may well wonder whether they are drinking milk or eating meat from cookie-cutter cows or their offspring.

The fact is, there is no way to know for sure, say the experts, even in Europe, which has come closer to banning livestock cloning than anywhere else in the world.

With the possible exception of the ram sacrificed by Abraham in the Bible, Dolly must be the world’s most famous sheep.

The ewe’s birth in an Edinburgh laboratory on July 5, 1996 was front-page news, provoking hype and hand-wringing in equal parts.

For the most part, cloning turned out to be a dead end.

But there is one sector in which Dolly’s legacy is alive and well: the duplication of prize breeding animals.

How aggressively the private sector has developed this niche market has depended in large part on national or regional regulations, with key differences between the United States, China and the European Union.

“The most dramatic impact of the cloning of Dolly has been on animal cloning in the United States,” said Aaron Levine, an expert in bioethics and cloning at Georgia Tech.

In 2008, the US Food and Drug Administration concluded that “food from cattle, swine and goat clones is as safe to eat as food from any other cattle, swine or goat.”

Not even scientists can distinguish a healthy clone from a conventionally bred animal, the regulatory agency said.

There are no requirements to label meat or milk from a cloned animal or its offspring, whether sold domestically or abroad.

For industry, the aim was never to set up assembly-line production — cloning is difficult and expensive at more than 10,000 euros ($11,000) a pop, and the success rate low, with few clones surviving to birth.

So the focus, instead, is on copying genetically outstanding specimens so they may naturally sire exceptional progeny.