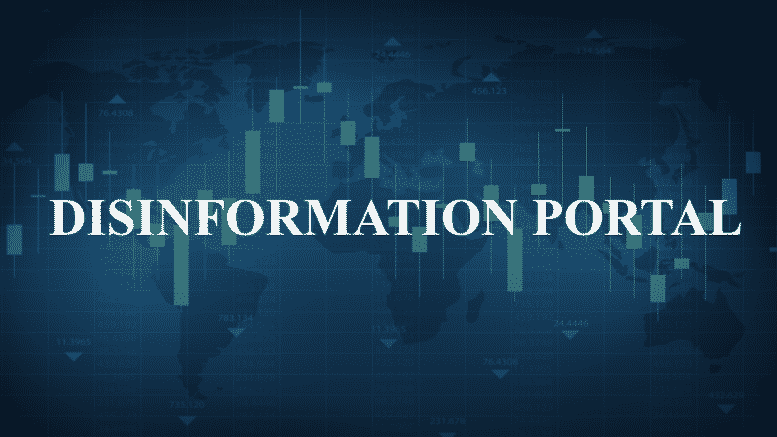 Please Share This Story!
PDF 📄
Technocrats have embedded propaganda into all mainstream media but now the federal government is entering into the mix like never before. DHS Fusion Centers are being coopted to provide institutionalized “fact checking” to target specific individuals rather than information-at-large. ⁃ TN Editor

It appears that the Department of Homeland Security (DHS) is no longer satisfied with Fox News and Tucker Carlson spreading fear and wants to deliver their own version of fear-induced news.

As NBC New York revealed, DHS has decided that the best way to counter Americans growing disdain over the never-ending war on terror is to open its very first government-approved disinformation portal.

“New Jersey’s Office of Homeland Security and Preparedness has unveiled a new disinformation portal designed to help people identify truth-obscuring, manufactured information — from deepfakes to altered videos and text and the groups behind them.”

DHS claims the government has a ‘higher responsibility’ to disseminate news to the public.

“Disinformation can have an insidious impact on the overall threat landscape,” NJOHSP Director Laurie Doran said. “In an age where the public has become increasingly dependent on online forums and social media platforms to stay informed, we all have a higher responsibility to scrutinize the information we’re consuming.”

Oh no, insidious ‘truth-obscuring, manufactured disinformation’, is now an ‘overall threat landscape’ to Americans. What will the Feds do to help us?

“The reality is no one platform or agency has the manpower or means to track and dispel the amount of disinformation being circulated,” added NJOHSP Deputy Director Eric Tysarczyk. “With this portal, we’re now equipping the public with the tools needed to decipher the information for themselves.”

According to the Feds, there is not one platform or government agency that can dispel disinformation so who do you think officials want to use?

One of biggest perpetrators of disinformation in the business and it is not a federal agency named the CIA or the FBI. 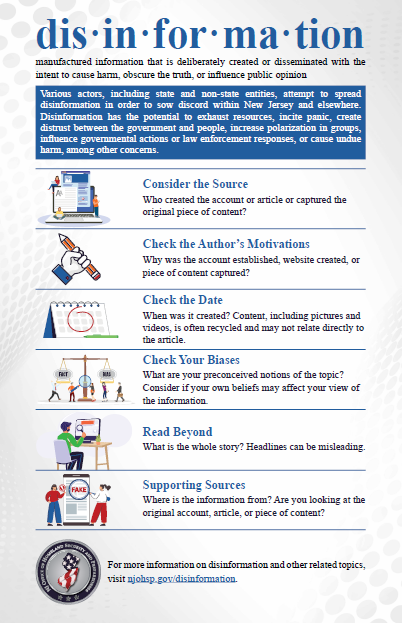 Under the “What Groups Employ Disinformation Campaigns” section, DHS claims that their old nemeses China, Russia and Iran are behind a lot of disinformation. But then they add their own fear-inducing spin by claiming domestic extremists are behind many disinformation campaigns in the U.S.

“Various actors, including foreign adversaries such as China, Russia, and Iran, as well as extremist groups, leverage international crises and high-profile incidents to spread disinformation and misinformation to sow discord in the United States.”

As I pointed out two weeks ago, fusion centers also allege that there are at least 23 different types of violent extremists in America.

Ironically, DHS admits that violent domestic extremists are circulating disinformation using the same tactics that they themselves have been using for years.

“The circulation of misinformation and disinformation has the potential to reach a broad audience, incite fear, create distrust between governments and their people, increase polarization in groups and influence governmental actions or law enforcement responses. Several known disinformation campaigns have spurred incidents that were ultimately reported to the New Jersey Suspicious Activity System, as they motivated individuals to act against government officials, law enforcement, critical infrastructure and the general public.”

One could be forgiven for mistaking a disinformation portal[s] as a law enforcement playbook edited to fit whatever future threats the Feds can dream up.

For over twenty-one years, DHS has eclipsed or matched the CIA in publishing fear inducing terrorism documents and warnings.

In 2002, DHS created it’s color-coded advisory system that was designed to keep Americans living in fear for nine years, only to be replaced by the National Terrorism Advisory System. And twelve years ago, DHS created its “If You See Something Say Something” campaign that treats every American as a suspected terrorist.

The news is littered with thousands of reports of innocent people being added to DHS’s secret no-fly list and law enforcement’s secret Suspicious Activity System.

One week before DHS unveiled its disinformation portal, the NJ fusion center released this gem about violent extremists in America:

Classifying anti-abortion, anti-government and black racially motivated protesters as domestic extremists is one of the most blatant examples of government disinformation that I have seen.

As Fox News reported, “the greatest terrorism-related threat that we face in the homeland is the threat of domestic violent extremism” said DHS Secretary Alejandro Mayorkas. As you can see, DHS has really become a master at inciting public fear and polarizing law enforcement.

My greatest fear is that the Feds are going to create a network of seventy-nine fusion center disinformation portals that will be used to spread government-approved news to social media and news outlets with the ultimate goal of criminalizing protests and anything else our officials don’t like.

Oh, yeah ! I bet the entire country will be consulting the new and improved DHS propaganda site so they can get help determining what is TRUTH and what is REAL. Yep, that’s gonn’a be a BIG seller among the worketards cause you’ve burned your bridges with the country. So, the awakened? We could care less, boys. Piss off.

YOU DO NOT EXIST, DHS. You are not.