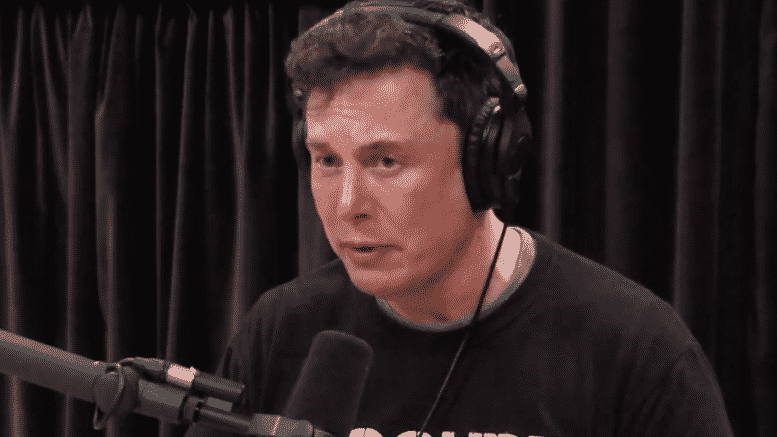 Elon Musk granted a 2 1/2 hour interview with comedian and podcast interviewer, Joe Rogan. The podcast was live streamed to YouTube and received 1.6 million views within 12 hours.

The reasons he did this are unclear, because during the same time that his adoring fans could tune in and listen to his wide-ranging prognostications, Tesla stock price collapsed by 10% within minutes of the opening bell.

At any rate, the Technocrat mind of Musk is finally revealed. He talks about living in a simulation, high-speed transportation, autonomous and flying cars, Artificial Intelligence, flame throwers, boring tunnels under Los Angeles, and much more. It is definitely the most eclectic interview I have every heard.

The bottom line is that Musk is far from being a normal human being. He jokes about being an ‘alien’ but not necessarily from outer space. Earlier Technocrats expressed that they are like aliens in a backward world of ignorant humans.

In Musk’s case. the acorn didn’t fall far from the tree: His Canadian grandfather, Joshua Haldeman, was head of Technocracy, Inc. in Canada during the 1930’s. Haldeman migrated to South Africa with his family in 1950, where Elon was born in 1971, but he returned to Canada when he was 17 to attend Queen’s University, then University of Pennsylvania and finally Stanford University.

To Musk, the world only exists in scientific terms. A computer simulation? Science is his god and salvation. Politicians are mostly useless because they don’t understand science or engineering. China’s leadership is pretty good however, because they have engineering or scientific degrees.

The black t-shirt he wore to the interview is emblazoned with “OCCUPY MARS“. Yes, one of his dreams is to colonize Mars within his lifetime.

This may be America’s big chance to reject Technocracy, Technocrats and their self-imposed vision of Utopia.