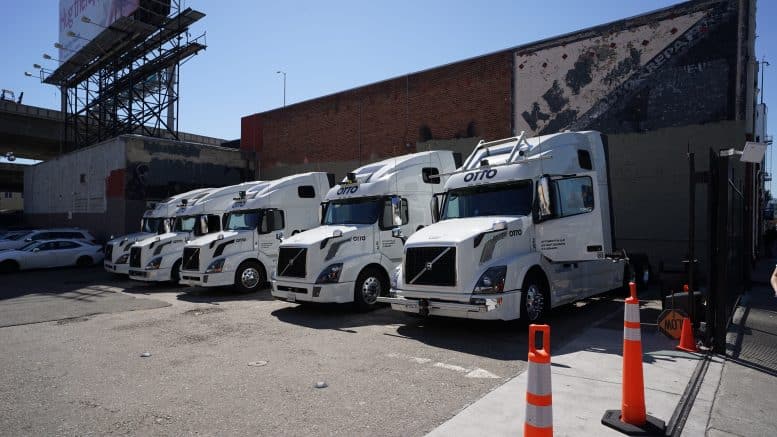 America’s 2 million truckers have long been mythologised in popular culture. But self-driving trucks are set to lay waste to one of the country’s most beloved jobs – and the fallout could be huge

Jeff Baxter’s sunflower-yellow Kenworth truck shines as bright and almost as big as the sun. Four men clean the glistening cab in the hangar-like truck wash at Iowa 80, the world’s largest truck stop.

Baxter has made a pitstop at Iowa 80 before picking up a 116ft-long wind turbine blade that he’s driving down to Texas, 900 miles away.

Baxter, 48, is one of the 1.8 million Americans, mainly men, who drive heavy trucks for a living, the single most common job in many US states. Driving is one of the biggest occupations in the world. Another 1.7 million people drive taxis, buses and delivery vehicles in the US alone. But for how long? Having “disrupted” industries including manufacturing, music, journalism and retail, Silicon Valley has its eyes on trucking.

Google, Uber, Tesla and the major truck manufacturers are looking to a future in which people like Baxter will be replaced – or at the very least downgraded to co-pilots – by automated vehicles that will save billions but will cost millions of jobs. It will be one of the biggest changes to the jobs market since the invention of the automated loom – challenging the livelihoods of millions across the world.

“I’m scared to death of that,” says Baxter, an impish man with bad teeth that he hides behind his hand as he laughs. “I can’t operate a pocket calculator!”

But Baxter is in the minority. Iowa 80 is a great place to check the pulse of the trucking community. Interstate 80 – the second longest in the country – runs from downtown San Francisco to the edge of New York City. The truck stop, about 40 miles east of Iowa City, serves 5,000 customers each day, offering everything they could need from shops and restaurants to a cinema, chiropractor, dentist, barber and a chapel.

Every week, a major tech company seems to announce some new development in automated trucking. Next month, the Tesla founder, Elon Musk, will unveil an electric-powered semi that is likely to be semi-autonomous. But most of the truckers I spoke to were not concerned by the rise of the robots. “I don’t think a robot could do my job,” says Ray Rodriguez, 38, who has driven up a batch of cars from Tennessee. “Twenty years from now, maybe.”

This is also subsidised by the US Govt since Tesla is involved.