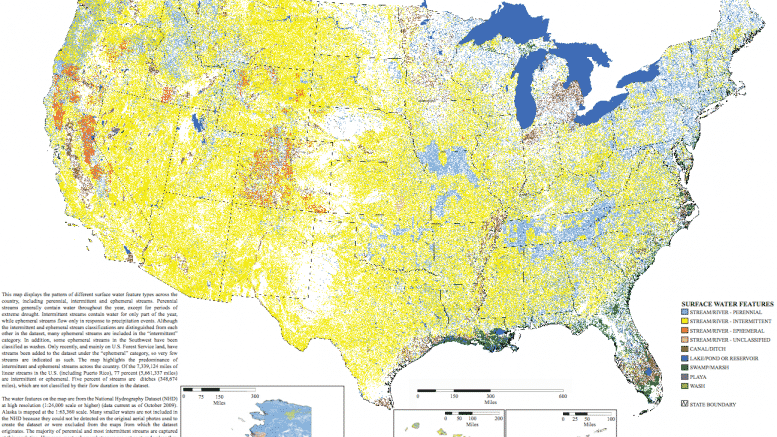 I wrote in May 2017, “I have warned for years that the Federal government would assert its full authority under the Clean Water Act that cedes all water in the U.S. to the them: from rivers, marshes, swamps, mud flats, drainage, playas, underground rivers, etc. The Feds are making a test case out of this farmer, and if they win, food production in America will drop precipitously.” That day has arrived where the EPA – under a Trump Administration – seeks to exert its full authority. This is a must-read article for everyone and especially those involved with farming or ranching. Also, see this related article: Farmer Plows Own Field, Faces $2.8 Million Fine For No Permit ⁃ TN Editor

A top House Republican is charging that the Environmental Protection Agency secretly drafted highly detailed maps of U.S. waterways to set the stage for a controversial plan to expand regulatory power over streams and wetlands, a claim the EPA strongly denies.

Rep. Lamar Smith, R-Texas, chairman of the House Science, Space, and Technology Committee, released those maps on Wednesday, while firing off a letter to EPA Administrator Gina McCarthy voicing concerns over why they were created in the first place.

“These maps show the EPA’s plan: to control a huge amount of private property across the country. Given the astonishing picture they paint, I understand the EPA’s desire to minimize the importance of these maps,” he wrote, in the letter obtained by FoxNews.com.

But an EPA spokeswoman said the maps, from the U.S. Geological Survey and Fish and Wildlife Service, do not depict which waters are subject to EPA control.

“Let us be very clear — these maps have nothing to do with EPA’s proposed rule or any other regulatory purpose,” Liz Purchia said, noting they were initially created years ago and subsequently updated.

At issue is a proposal that Smith and fellow Republicans, as well as farmers and other groups, say could endanger private property rights by giving the EPA a say over temporary waterways like seasonal streams, under the Clean Water Act. That the agency had highly detailed maps drawn up has raised suspicion about their purpose.

“While the Agency marches forward with a rule that could fundamentally re-define Americans’ private property rights, the EPA kept these maps hidden,” Smith wrote in his letter. “Serious questions remain regarding the EPA’s underlying motivations for creating such highly detailed maps.”

He added: “The EPA’s job is to regulate. The maps must have been created with this purpose in mind.”

The high-resolution maps of each state depict a dense and veiny web of intertwining waterways. They’re color-coded to distinguish everything from canals and ditches to reservoirs to marshes to various types of streams. The maps show permanent streams, but also those that contain water for only part of the year.

The EPA denied the maps were drawn to chart areas subject to the Clean Water Act. The agency said they were only drawn to identify the “extent and location” of waterways and other details.

Trump, we put you in there for precisely this type of government oppression.

Perhaps Congress needs to pass a law LIMITING the scope of the EPA to stop the massive EPA bureaucracy.

Really nothing new here. A few years ago reports were popping up about rainwater storage, ponds, etc. A car dealer was stopped from washing vehicles with stored rain water. They are forcing us to go to war with them as they overstep their intent. The government was supposed to protect our borders, maintain the infrastructure, bring relief aid during earthquakes, storms, etc. They weren’t meant to have the incredible amount of power they now have. This is the death of a thousand cuts, the boiling frogs metaphor at work where Billions of people view Katy Perry MKULTRA videos, where milions… Read more »