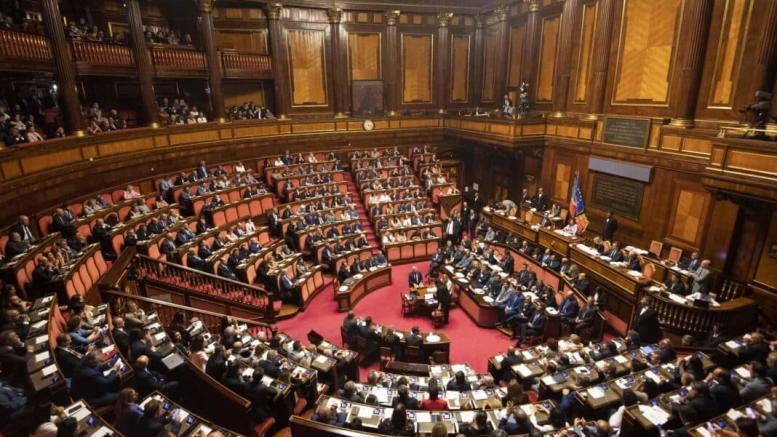 A general view of Italian Prime Minister Giuseppe Conte (C, standing) as he addresses the Senate in Rome, Italy, 20 August 2019. Conte in his address to the senate called bringing about the government crisis irresponsible. Deputy Premier and Interior Minister Matteo Salvini and his party League pulled out from government and caused a political crisis a week ago. Conte said that the government has come to an end and that he would resign. EPA-EFE/CLAUDIO PERI

Please Share This Story!
PDF 📄
Several European nations have adopted Technocrat-run governance and none have met expectations. However, when the economy again turns south, there will be populist demand for even more Technocrats. ⁃ TN Editor

The EU’s economy has essentially been flat over the past year. The slump in manufacturing is deepening. Companies are cutting work hours and issuing profit warnings. The dominant mood in the European and international markets today is anxiety. Germany, Europe’s economic powerhouse, announced on 14 August that its GDP had contracted by 0.1% in the second quarter of 2019 compared with the previous three months.

This has left many analysts to conclude that Europe is heading for an outright recession.

Whenever there is an economic or political crisis on the horizon, there is one particular pattern…societies often look for a technocratic government to solve their problems. This happened in several European countries in the wake of the 2008 recession and the Eurozone crisis. Caretaker technocrat-led administrations have been historically popular in crisis-prone democracies, particularly in Southern and Eastern Europe.

In today’s UK, the mother of parliamentary democracy, there are calls that the post-Brexit shake-up must include apolitical experts who should sort-out the political mess that began in 2016 when Britons voted in favour of leaving the EU. And yet, more than three years on and the Parliament still finds the EU’s terms for the exit to be unacceptable. With the EU showing little willingness to renegotiate, Boris Johnson, the UK’s new prime minister, is pulling his country closer to the cliff of a “no-deal Brexit”, which the Parliament is opposing.

In today’s Europe, traditional political parties are no longer liked or trusted by voters the way they used to be. One reason is that many politicians often cannot deliver after overpromising. Coming to power, they face difficulties in solving major problems and have no political courage to outline either difficult or unpopular choices to their base. Their partisan cabinets often fail to respond to challenges or deal with the consequences.

In the current economic and political climate in Europe, one may expect calls for technocratic cabinets to raise. There will be arguments and the accelerated expectations that apolitical experts can outperform partisan cabinets. Some will even argue that technocrat-led caretaker governments are among the most advanced forms of power-sharing between elected politicians and experts in contemporary European democracies.

I have my share of a technocratic experience. As an international attorney, I left the private sector in 2015 when I was called to join the so-called technocrat-led government of post-revolutionary Ukraine to serve as the First Deputy Minister of Economy. There were several other such technocrats in the Ukrainian government. Some, like me at the time, were expats who had been granted Ukrainian citizenship. The expectation then was, just as it is with any technocratic administration, that the non-partisan experts may set and enact policies that were independent of parties, their political decisions, and elected party representatives.

Those expectations had failed.

From that perspective, technocratic governments erode democracy and keep bad politicians in power. Although such governments have sometimes been long-lasting, they are illegitimate and democratically dysfunctional. They are a symptom of high levels of state exploitation by irresponsible leaders and political parties. Their occurrence in Europe is part of a broader sense of malaise in Western democracy where, instead of being bailed out, politicians need to be held responsible and accountable.  Any claims for having a successful record to defend such technocratic governments and their legitimacy disregards their unfavourable legacy and political conditions to which they are contributing.

Was it a revolution or a coup that took place in Kiev six yearrs ago?
You overlook the fact that one advantage of a “caretaker” government is that they cannot raise the taxes.