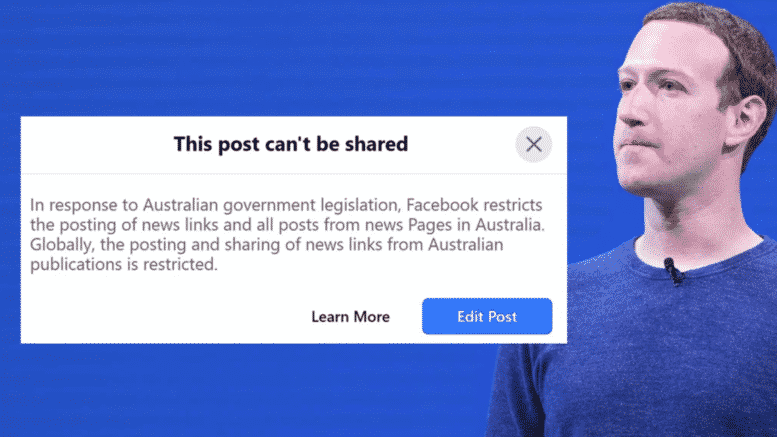 Posted By: Barbara Ortutay and Tali Arbel via AP February 19, 2021

Please Share This Story!
PDF 📄
In the most draconian move ever, all Australian stories are banned from being shared on Facebook, whether inside or outside of the ‘down under’ state. This could result in a PR nightmare as other states are now lining up to tackle Facebook’s out-of-control megalomanic lust for control. ⁃ TN Editor

For years, Facebook has been in a defensive crouch amid a slew of privacy scandals, antitrust lawsuits and charges that it was letting hate speech and extremism destroy democracy. Early Thursday, though, it abruptly pivoted to take the offensive in Australia, where it lowered the boom on publishers and the government with a sudden decision to block news on its platform across the entire country.

That power play — a response to an Australian law that would compel Facebook to pay publishers for using their news stories — might easily backfire, given how concerned many governments have grown about the company’s unchecked influence over society, democracy and political discourse. But it’s still a startling reminder of just how much power CEO Mark Zuckerberg can wield at the touch of a figurative button.

“Zuckerberg’s flex here shows how he can disrupt global access to the news in a heartbeat,” said Jennifer Grygiel, a social media expert and professor at Syracuse University. “No company should have this much influence over access to journalism.”

Facebook’s move means people in Australia can no longer post links to news stories on Facebook. Outside Australia, meanwhile, no one can post links to Aussie news sources such as the Sydney Morning Herald.

Facebook said the proposed law “ignores the realities” of its relationship with publishers that use its service to propel their stories across the world. Technology and media experts have also raised serious concerns. Timothy Berners-Lee, the British computer scientist known as the inventor of the World Wide Web, told an Australian Senate committee in January that the law’s precedent could ultimately wreck the internet by requiring payment for links that have always been free.

The law hasn’t gone into effect. Negotiations between the tech companies, the Australian government and the country’s media giants — most notably, Rupert Murdoch’s News Corp. — may result in changes to the final version.

What can’t be changed, though, is Facebook’s dramatic, if ham-handed, attempt to force the issue. The company provided no warning of its decision to block Australian news and applied the ban so clumsily that it blocked many innocent bystanders.

“As the law does not provide a clear guidance on the definition of news content, we have taken a broad definition in order to respect the law as drafted,” said Facebook spokeswoman Mari Melguizo, who added that the company would unblock any pages that were blocked by accident.

Facebook’s reaction was not justified even if there are issues with the law, including the fact that it stands to benefit media giants like News Corp., said Elizabeth Renieris, director of the Notre Dame-IBM Technology Ethics Lab. Facebook’s show of strength, she said, is “really going to wake up regulators around the world.”

“If it is not already clear, Facebook is not compatible with democracy,” Rep. David Cicilline, a Rhode Island Democrat who heads a House subcommittee that has urged antitrust action against the company, wrote on Twitter. “Threatening to bring an entire country to its knees to agree to Facebook’s terms is the ultimate admission of monopoly power.”

I hope the Lieberals in Canada would do the same for our media but I’m not going to hold my breath, the Lieberals here already bought the MSM here with $650Million of taxpayers money to be their propaganda machine. Why would they put that in jeopardy.

Speaking out of both sides of their mouths, both FB and the Australian government are nothing more than controlling profiteers, FIRST and FOREMOST. Zuckerberg is all about profit, exampled here. When it comes to removing FB money he’s all up in that. Australia, sadly, has become all about totalitarianism/extremist behavior–you cannot describe the country’s actions against their citizens as anything less. Now, these two are at each other’s throats over profit and control. GOOD!!!! I hope they exterminate each other in their zeal to control the public mind. Maybe Katherine Austin Fitts is correct. The current extremists will eliminate each… Read more »

Maybe it’s time to hire some “Town Criers” around the world. The “BBQ, beer, freedom” t-shirt guy who disrupted the live Clark County Nevada election update sure got his message across. Think outside the box or “square” (in Australia).

Hope Facebook keeps on doing this. Maybe they will put themselves out of business.

“We’re doing something about the bad corporations” is the propaganda. However, this is the beginning of the removal of the middle man. Why? Those who control the world use the politicos to create villains. They know the politicos will do what’s in their nature. After decades of creating any villain and allowing profits to run wild there’s a move to eliminate their corporate lobbyists. After which there is a choke-point created, a commission to oversee, ‘information’ in this case. Soon, there will be little bargaining power for big tech. The corporation becomes the government which controls and directs massive profits… Read more »