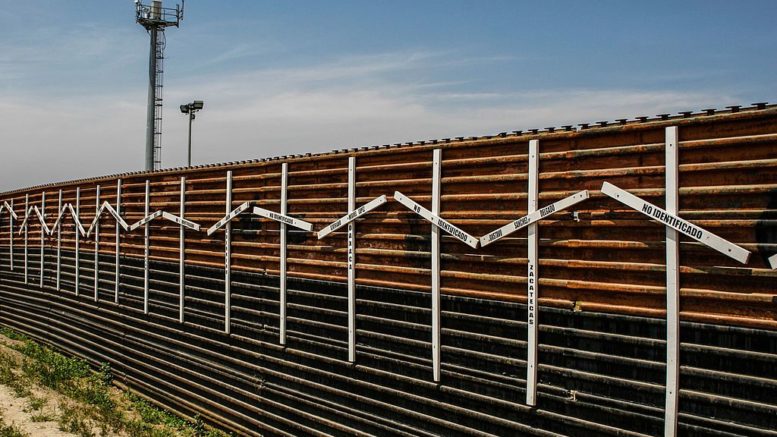 Please Share This Story!
PDF 📄
When Technocracy declared in 1938 that its endgame was the “Science of Social Engineering”, its mandated requirement was total and continual surveillance of every moving part of society, including people.

But not limited to people. All processes, all movement of resources and finished goods, all construction, all animals, etc., Technocrats see the world as a factory to be run as efficiently as possible, which would not be possible without monitoring. ⁃ TN Editor

Border Patrol’s electronic eyes will spot you long before you spot them.

If you walk along the United States border in remote stretches of New Mexico desert, or in the grasslands between North Dakota and Canada, you might not hear the buzz of what could be flying above you: A Predator drone — the same vehicle that has been outfitted to drop bombs over Afghanistan and Iraq. From five miles away, the drone’s cameras can see so well they can tell if you’re wearing a backpack.

If you’re in the Florida Keys, you may be spotted by an altogether different set of eyes in the sky. Up 10,000 feet in the air, a football field-sized zeppelin floats with an array of cameras, sensors, and radar systems so sophisticated that it can track every car, aircraft, and boat within a 200-mile range.

And if you’re near the deserts of southern Arizona, it won’t be hard to notice the 160-foot towers that rise up from the sandy landscape, equipped with advanced thermal imaging that can sense your exact movements from over seven miles away.

Because large portions of the border are so remote, and because U.S. citizens seem more willing to endorse surveillance programs that specifically target non-citizens, American borderlands have become a testing ground for cutting-edge surveillance tech.

To call this technology “Orwellian” would be anachronistic. Even George Orwell, for all his dreary imagining, never conceived of an infrared camera that could detect a person’s faintest movements.

Even as privacy hawks on the left and the right warn about the government’s embrace of surveillance tech, it’s been impossible to stop the fast-accelerating development of new infrastructure. President Donald Trump and Democrats in Congress might clash over the need for a border wall, but there’s a growing consensus in Washington that the country needs a “virtual wall.” The terms for this concept vary: House Speaker Nancy Pelosi calls it a “technological wall”; other members of Congress have adopted Silicon Valley lingo and refer to it as a “smart wall.”

Jeffrey Tucker, the editorial director at the libertarian think-tank American Institute for Economic Research, says that people who would otherwise have a knee jerk reaction against federal overreach suddenly acquiesce when the government develops enormous power in the name of border security.

“Look what you’re giving up: All your basic constitutional rights that you would normally fight for get confused when it comes to the immigration issue,” Tucker says.

Part of the project’s political momentum comes lobbying efforts by the tech industry. A surveillance surge on the border means yet another gold rush in Silicon Valley. Tech firms have openly salivated at the prospect of a phalanx of surveillance on the southern border.

When the idea of a smart wall began gaining traction in 2017, three higher-ups from Palantir — the secretive data tech giant that has long been behind some of the government’s largest surveillance projects — left to co-found Anduril, a company dedicated to creating cutting-edge tech for border security. Business has been booming ever since.

“Companies see that there’s a long-term source of stable income with government contracts,” says Jacinta González, a senior campaign organizer with Mijente, a pro-immigrant organization that has studied relationships between Silicon Valley and federal immigration authorities. “Companies like Palantir and Anduril have created a business model where they look like they’re going to the market to get new clients.” In reality, González says, tech companies are convincing government agencies they need to create new technologies — not the other way around.

“Decisions made by law enforcement are being driven by vendor. Vendors are wining and dining officials, where they make these miraculous promises about what their tech can accomplish,” says Dave Maass, a senior investigative researcher at the Electronic Frontier Foundation, a civil liberties organization. “Governments are so eager to be at the cutting edge, they eat it all up.”

Today, that cutting edge of surveillance tech is freakily futuristic: Customs and Border Protection (CBP), already blowing through hundreds of millions of dollars a year on tech contacts, has now begun looking for artificial intelligence capabilities that could fly patrol drones autonomously. The dream is of a fleet of surveillance robots, constantly in the air, thinking for themselves, searching out human bodies.

Drones can be cloaked day or night visually.
FLIR now POSE, is through wall viewing via microwaves.

I’ve had the Trump ‘wall’ discussion with several people who are pro-wall. I certainly am not. It’s ridiculous and smacks of machine guns, killer dogs, corruption, a prison existence and evil thinking as did the Berlin Wall. Of course, the last two generations either don’t remember East/West Berlin or they barely remember talk of it. Now we have a USA tech-wall being pushed by the Technocrats to stabilize their long-range profits. If the current technology being used on the borders can do all that is stated herein then why is more needed? TO KEEP PEOPLE IN not OUT. There is… Read more »