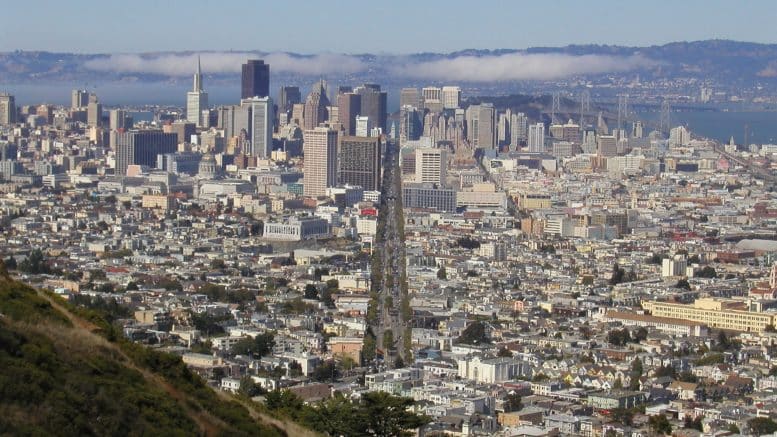 Market Street is the busiest and most central street in downtown San Francisco. From now on, according to policies set in the UN’s Agenda 21 for Sustainable Development, it will be foot-power, bicycles, scooters, buses, etc. ⁃ TN Editor

The San Francisco Municipal Transportation Agency (SFMTA) Board of Directors on Tuesday voted unanimously to approve the Better Market Street plan, which will ban cars along the downtown strip of Market Street.

The plan, which has been in the works for nearly a decade, will prohibit vehicles from driving on any of Market Street east of 10th Street. The city will instead encourage walking, biking and public transit by investing in new streetscapes, raised and protected bike lanes, and improved bus and streetcar service.

San Francisco Mayor London Breed expressed support for the plan, noting in a letter to the SFMTA that Market Street is “our civic spine, where we convene for celebrations and come together to call for change.” She said the plan will help increase safety, transit reliability and attractiveness to the city.

The Better Market Street planning team estimates 500,000 people walk on Market Street daily, with 650 people traveling on bike and 200 buses running down the corridor during peak hours. By eliminating cars, planners predict Market Street will not only become a better transportation route, but also “a place to stop and spend time, meet friends, watch people while sitting in a café, or just stroll and take in the scene.”

San Francisco is already no stranger to prohibiting cars on streets for pedestrian recreation. The city is home to two programs — Sunday Streets and Play Streets — that temporarily close neighborhood blocks off from cars to encourage “car-free fun” for children, seniors and neighbors. The success of such programs gave the city a window into the possibilities and benefits of a permanently vehicle-free central hub.

Safety is a main driver of the effort, as outlined in Breed’s letter to SFMTA. She noted that five of the city’s most dangerous intersections for pedestrian and cycling collisions are located in the downtown corridor of Market Street. To align with the city’s Vision Zero goals, the plan outlines efforts to install painted safety zones at eight intersections along Market Street. Bicycle intersection improvements will also occur on four cross-streets.