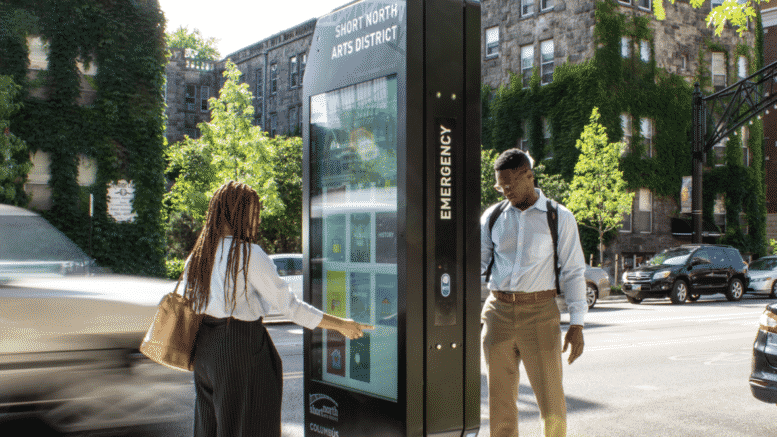 Please Share This Story!
PDF 📄
It’s FREE! Cities are gobbling up this offer but are oblivious to the data harvesting being done to their residents. Equipped with “optional” cameras, these “smart city kiosks” will collect data from all passers-by as well as those who stop to inquire. Technocrats who collect data can never get enough. ⁃ TN Editor

It seems like no matter where you go ‘free’ smart interactive kiosks are being installed in cities everywhere.

Smart interactive kiosks like IKE boast about offering free advertising to local businesses during the pandemic, so how do they make any money?

IKE’s website does a great job of painting itself as a ‘free’ interactive kiosk service to the public. In fact they do such a great job of obscuring how they collect users personal information, that I didn’t think there was much of a story here.

After clicking on IKE’s four tabs “About, Technology, Applications and Team” I thought maybe they really were using advertising dollars to pay for their rapid expansion. But then I struck paydirt after I clicked on their privacy policies at the bottom of their website.

IKE claims that it “respects your privacy and is committed to protecting it through our compliance with this policy” but if you continue reading their privacy policy you soon realize that all is not as it seems.

IKE tells users that they will collect information on each user’s interactions with the Kiosk. “We may share this information without restriction with the city where the Kiosk is located and its agencies…”

The types of information their kiosks collect becomes a little clearer in IKE’s interactive section.

IKE claims that they will not share or sell users personal information to third parties but then the next paragraph they say the exact opposite.

“[I]n choosing to engage these features, you agree that we can provide the information you give to a Kiosk, including any information that may personally identify you, to that Third-Party Partner: (a) 311; (b) Get Around; and (c) Photo Booth.”

Basically, what IKE is saying is that anyone who uses IKE’s kiosks agrees to give their personally identifiable information (PII) to them and third parties. So much for respecting users privacy.

IKE goes on to explain that 311 user information is stored by Third-Party Partners.

IKE’s WiFi Service section says their kiosk’s might “share certain technical information with the internet service provider across the Wi-Fi signal.” But users shouldn’t worry because IKE deletes their PII every 12 months.

This is nearly the exact same business model that “Smart City Kiosks” used in New York City three years ago, the only difference is that that IKE’s kiosks are not equipped with microphones.

So how does IKE make a profit? It appears that IKE makes money from letting Third-Party Partners pay for the right to collect users PII information.

Users of IKE kiosks should be concerned about two things.

Sharing certain technical information with an “internet service provider” is a slick way of saying IKE and Third-Party Partners are IDing every Bluetooth enabled device.

The second concern is third party internet service providers are under under no obligation to delete a user’s personal information every 12 months, or ever.

“Each Kiosk may be equipped with one or more cameras. The cameras capture images of the area surrounding the Kiosk, and those images may include you. We will not keep any footage captured by any camera for longer than 15 days, unless the footage is necessary to investigate an incident. Furthermore, we will not use or disclose data collected by our cameras except to improve the functionality and ensure the security of the Kiosks, as necessary to address illegal activity on, associated with or perpetrated against the Kiosks or in the surrounding area, or if we believe the disclosure is required by law or in the interest of public safety.”

Everyone passing in front of an “IKE Smart City” kiosk will be recorded and have their images stored for at least 15 days. Except of course if IKE or law enforcement want to save the footage, then it is anyone’s guess how long they will retain the footage for.

IKE’s “disclosure of information” section is basically an indemnity clause against future lawsuits.

“In addition to the disclosures we have identified elsewhere in this policy, we may also disclose any and all information collected by us or that you provide to us via a Kiosk as described in this policy to our parents, subsidiaries and affiliates, and/or any entity who acquires, by any means, some or all of the assets or ownership interests of IKE Smart City, LLC.”

“We (IKE) may also disclose any and all information collected by us that you provided via a kiosk”? Was your phone’s Bluetooth enabled when you used or walked by an IKE kiosk[s]? Unless you just happened to click on their privacy policies at the bottom of their website, users’ would have no way of knowing how much PII is being collected and stored.

“We may update this Privacy Policy from time to time to reflect changes in applicable law. Because any personal information you provide to us is not stored or maintained in databases owned or created by us, we will be unable to notify you as and when this Privacy Policy is updated.”

And to make matters worse, users must constantly check and make sure that IKE has not changed their privacy policy. Also, IKE’s kiosks are not supposed to be used by children under 13. Why? See above.

IKE’s surveillance camera kiosks popping up in cities everywhere have all the earmarks of a Big Brother surveillance network masquerading as a ‘free’ interactive kiosk network.

Data is everything. You control data, you control the masses.

[…] this recent story: ‘Free’ Interactive Kiosks Surveil Everyone While Scooping Up Their Personal Information. ⁃ TN […]