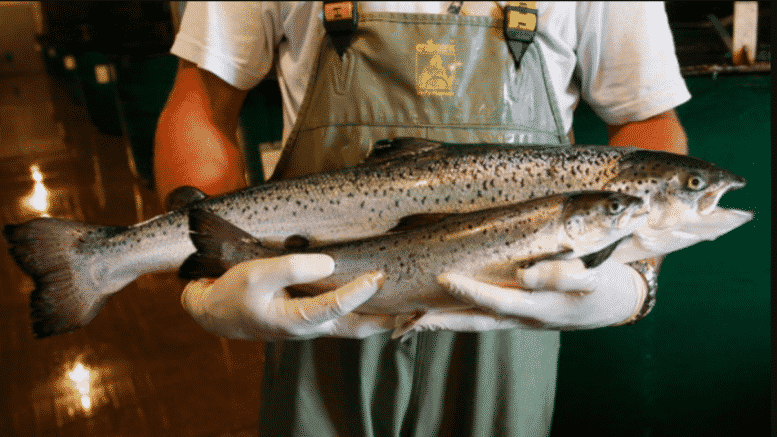 Please Share This Story!
PDF 📄
It’s a newsy day for biotech companies with stories released about genetically modified fish, beef and insects. The industry believes it has the right to modify anything that has DNA including humans. Read my recent article, Global Blueprint Exposed: The Takeover Of All Genetic Material On Earth, for more details. ⁃ TN Editor

Today, Center for Food Safety (CFS) filed a Freedom of Information Act (FOIA) lawsuit against the Food and Drug Administration (FDA) for unlawfully withholding records regarding FDA’s environmental assessment of genetically engineered (GE) salmon and a planned Ohio-based production facility—a major expansion from current capacity. The FOIA lawsuit comes on the heels of CFS and allies’ successful lawsuit holding FDA’s approval of GE salmon unlawful. FDA’s approval marked the first time any government in the world had approved a GE animal as food.

“Despite the 2020 court decision holding FDA’s first-ever approval of a genetically engineered food animal unlawful, FDA claims it needs nearly two years to produce records,” said Amy van Saun, senior attorney at Center for Food Safety. “But our request is narrow and straightforward: it’s time for FDA to tell the public about the possible environmental and ecological effects of genetically engineered salmon, including any effects to endangered wild salmon species.”

In 2020, in a victory for CFS and allies, a California district court ruled the FDA violated core federal environmental laws in approving GE salmon, including failing to fully assess the serious environmental consequences of approving a GE salmon and the full extent of plans to grow and commercialize the salmon in the U.S. and around the world. The court sent the approval back to FDA to undertake more thorough environmental analyses to inform the public about the potential risks.

After that ruling, AquaBounty announced plans to build a $200 million facility, expanding its production of GE salmon by 10,000 metric tons. This operation will be eight times larger than its existing Indiana facility. With action in play to produce GE salmon on an even larger scale, it is even more important to understand the environmental and ecological risks of producing and marketing GE salmon for human consumption.

In October 2021, CFS submitted a FOIA request to FDA, seeking all documents related to FDA’s environmental assessments of AquaBounty’s AquAdvantage salmon and the planned Ohio facility, pursuant to the district court’s ruling. FDA is yet to produce the records, prompting CFS to now sue FDA under FOIA.

“We are concerned that FDA is not paying careful attention to AquaBounty’s planned expansion in Ohio,” said Jaydee Hanson, policy director at Center for Food Safety. “After years of touting that it will grow its fish in tanks that recycle the water, the company now plans to pump water from the aquifer that supplies community drinking water and dump wastewater back into a nearby stream. Without the requested documents, we have no way to know if FDA has fully considered the effects this facility will have on the local environment.”

CFS is committed to ensuring the public has access to information concerning government regulation of food production and labeling. CFS’s FOIA program is committed to upholding the principles embodied in FOIA, such as maintaining an open and transparent government.

It is interesting that Janet Woodcock, acting commissioner on the Food and Drug Administration (FDA) refused this information until the FOIA request had to be made. it’s has though the public has no need to know what they are being fed on a daily basis. Just what is the public being fed in this new plant-based campaign to make substantially more genetically modified foods? These are steadily being put on the market!

They have no right at all. They have to be stopped.

These are the ‘crazy’ scientist from the science fiction movies that have jumped from fiction to reality. They have become “Mad,’ and evil, their quest is to change the world and everything in it.