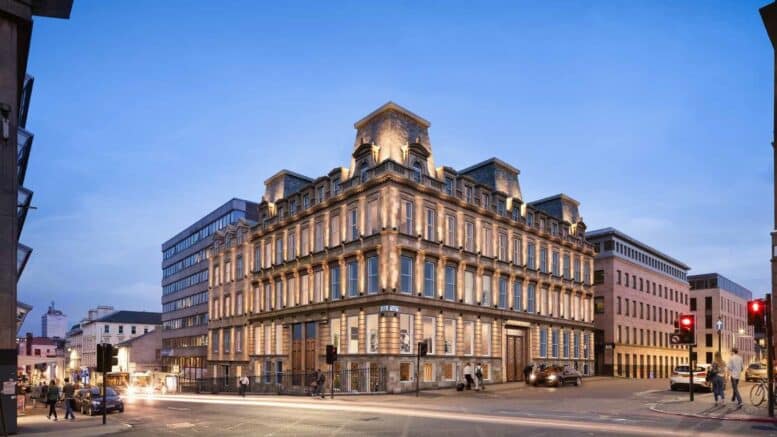 Posted By: Bloomberg via SupplyChainBrain October 28, 2021

Please Share This Story!
PDF 📄
Get ready for the “Glasgow Declaration” as the UN meets with global oligarchs from the World Economic Forum in Glasgow to hammer out the destruction of the old economic system and the initiation of the Great Reset. As attendees fly in on private jets, the discussions will focus on removing carbon from the atmosphere.

It is noteworthy that the WEF is co-sponsoring this UN “Conference of the Parties” and is intricately embedded in Sustainable Development doctrines, aka Technocracy. ⁃ TN Editor

COP climate talks were always going to be difficult: 200 countries in search of a plan to prevent catastrophic warming of the planet with time running out fast.

The backdrop of terrifying weather events had brought a renewed sense of urgency to the matter. Then, the energy crisis struck, leaving Asia and Europe scrambling for fossil fuels, forcing China to double down on coal, and giving climate laggards another excuse not to engage. In the U.S., President Joe Biden’s green ambitions have gotten bogged down in domestic politics, undermining his credibility as he tries to push others to curb their emissions.

The aim of COP — the acronym for the conference of parties that’s now in its 26th round — is to curb emissions, keep the goal of 1.5 degrees of global warming within reach, reduce coal use, sort out rules for a global carbon market and raise billions in climate finance.

But at the heart of talks is the issue of fairness. Developing nations say rich countries wrecked the planet as they industrialized, and it’s now unfair they’re thwarting others’ economic progress — and failing to provide enough cash to help poor countries adjust. That’s why there’s so much talk about how much money will be on the table.

Where It All Begins: Rome

COP will be held in Glasgow, Scotland. But the Group of 20 summit in Rome this weekend will set the tone as climate will dominate the agenda, with talks on coal use, net- zero goals and climate finance. So far, the G-20 — which includes major emitters China and India — has little to show for many summit hours. Meetings this month even showed signs of backsliding. If leaders can make progress, it will be a major boost for COP. They wrap up in Rome on Oct. 31, and head straight for Glasgow.

Some key leaders are going to be missing, including China’s Xi Jinping, Russian President Vladimir Putin and Brazilian President Jair Bolsonaro. Still, almost 200 countries will be represented. Some delegates will be there in person, some will dial in from home, and there will be strict rules on masks, numbers allowed in negotiating rooms, and Covid testing. The pandemic has added extra obstacles, and some countries go into the talks resentful of what they perceive as unequal access.

Under the landmark Paris Agreement of 2015, countries have to regularly review their pollution-reduction pledges in order to ensure the world stays on track to limit the rise in temperature to close to 1.5 degree Celsius. The first promises — called Nationally Determined Contributions, or NDCs — were submitted in 2016, but it was clear that they were well short of what science says is needed.

While some nations have already submitted new pledges over the past year, several major economies, including China and India, haven’t. The plans made so far would lead to a 2.4-degrees increase in temperature by the end of the century, according to the nonprofit research group Climate Action Tracker. At the start of COP there’s a moment of taking stock — to see just how far away we still are from keeping 1.5 degrees within reach. U.S. climate envoy John Kerry has already acknowledged the plans probably won’t be enough, and one aim of Glasgow is to make sure countries keep coming back with improved goals.

The U.K. hosts describe the aims for this COP as “coal, cars, cash and trees.” That means ending the use of the most polluting fossil fuel; phasing out the internal combustion engine; raising cash to help developing countries transition to cleaner energy and protect against the ravages of climate change; and reversing deforestation. They also aim to figure out global rules for pricing and trading carbon globally. Expect posturing and grand statements in the first two days — along with perhaps some new pledges — then the leaders leave, and the real work starts.

“Some key leaders are going to be missing, including China’s Xi Jinping, Russian President Vladimir Putin and Brazilian President Jair Bolsonaro. Still, almost 200 countries will be represented. Some delegates will be there in person, some will dial in from home, and there will be strict rules on masks, numbers allowed in negotiating rooms, and Covid testing. The pandemic has added extra obstacles, and some countries go into the talks resentful of what they perceive as unequal access.” They will only wear masks in front of the camera. Behind the scenes they will have orgy’s, drunkenness, gorging on expensive food… Read more »

You forgot them spewing thousands of pounds of carbon as they return to tell the little people they are making too much carbon. All in all, we are the carbon they mean to reduce. Review the Georgia Guidestones for a simplified list of their goals.

“…we need to change radically and we need to change fast,” says EU climate chief Frans Timmermans. “That’s going to be bloody hard; that’s the bad news.” Yes, blood will have to be shed before this war ends! It’s war. No doubt about it the elites want us all dead. There is NO WAY to do what they plan without killing off 99% of humanity. Once they outlaw cheap energy that has led to the greatest increases of living standards ever, their populations will plummet with the food shortages, and then they tank the currency. They want us all dead.… Read more »

We are the carbon they plan to reduce.

[…] favorite leaders recently spoke at its 2021 conference, an NLC delegation is attending the COP26 UN Climate Change Conference, and NLC made a recent commitment to drive climate change action at a […]

[…] favorite leaders recently spoke at its 2021 conference, an NLC delegation is attending the COP26 UN Climate Change Conference, and NLC made a recent commitment to drive climate change action at a […]