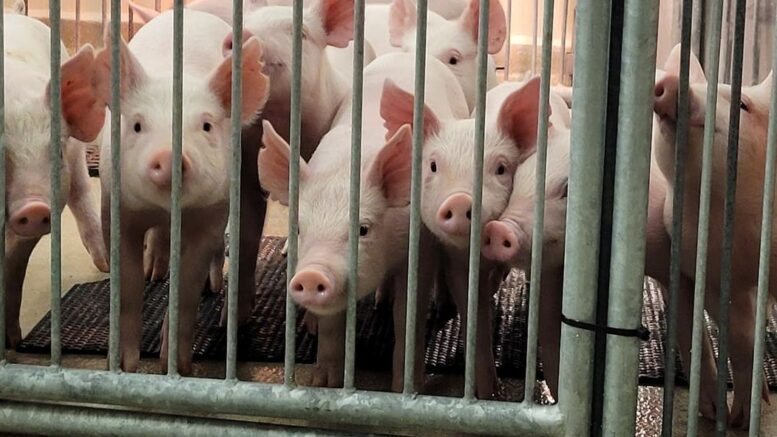 Please Share This Story!
PDF 📄
This transgenic creation cuts both ways. It can be used to explore cures or preventions for coronavirus or it can be used to test more deadly lab-engineered bio-weapons. The debate over mixing genes of different species or classes has been a raging debate between scientists. Technocrats have no ethical boundaries or moral restrictions to any type of experimentation. ⁃ TN Editor

China’s state-run Global Times newspaper celebrated on Thursday the alleged discovery of a scientific process to create a “humanized pig” more susceptible to severe Chinese coronavirus cases, which scientists could infect and use for research.

The propaganda outlet attributed the scientific achievement to the Institute of Microbiology of the Chinese Academy of Sciences (IMCAS). The CAS, a research institution, is the world’s largest organization of its kind and a formal arm of the Chinese government. The Times published an illustrative figure on the development of “humanized” pigs that appears to have first surfaced in a study published in August that promoted the use of genetically modified pigs for Chinese coronavirus research based on how rapidly scientists could generate them and their heightened similarities with the human body.

The August study – published in Cell Discovery, a journal sponsored by the CAS, revealed that Chinese scientists had attempted to use CRISPR gene-editing technology to remove the genetic protective shields that make Chinese coronavirus not a significant threat to most pigs. CRISPR technology became the source of global controversy in 2018 after a Chinese scientist, He Jiankui, claimed to have used the method to genetically modify unborn baby twins to make them immune to HIV. The Communist Party sentenced He to three years in prison for conducting the human experiment without the full approval of the Party.

In addition to the “humanized pig,” the Global Times heralded the IMCAS for creating “human distal lung organoids (hDLO).” According to the peer-reviewed journal Nature Methods, an organoid is “a 3D multicellular in vitro tissue construct that mimics its corresponding in vivo organ, such that it can be used to study aspects of that organ in the tissue culture dish.”

“The existing cell lines and animal models on guinea pigs and some primates used for simulation of COVID-19 [Chinese coronavirus] infection cannot capture the key characteristics of human physiology and therefore limit the accuracy of test on efficacy of vaccines and drugs,” the Global Times asserted. “The two new models can show clinical features similar to actual COVID-19 patients.”

“The better simulation of a human body has made the two models more reliable on in-depth study of how COVID-19 infects and develops in the human body,” the state newspaper claimed, noting that “several national funds” backed both the “humanized pig” and “organoid” experiments.

The study on humanized pigs published in Cell Discovery in August lamented that naturally occurring forms of mammals similar to humans had yet to be found to experience severe coronavirus symptoms, “calling for a better large animal model that could mimic the full spectrum of COVID-19 symptoms.” To create a pig more vulnerable to severe disease at the hands of Chinese coronavirus, the scientists claimed to have modified the pigs in utero using CRISPR/Cas9 technology to give it the ACE2 receptor, a type of protein that the Chinese coronavirus uses to bind onto cells and cause damage. Without them, research suggests the virus has a much smaller, if any, chance of reproducing and harming its host body.

CRISPR, or Clustered Regularly Interspaced Short Palindromic Repeats, is a form of gene-editing technology. According to CRISPR Therapeutics, CRISPR/Cas9 “edits genes by precisely cutting DNA and then letting natural DNA repair processes to take over.”

“Here we report our attempt to create the first humanized pig expressing the hACE2 receptor for COVID-19 research, speculating that humanization of the pig ACE2 receptor could make pigs susceptible to SARS-CoV-2,” the study read.

The scientists note that the end goal of the experiment is to birth pigs for harm – to make them sick with Chinese coronavirus and study advanced degeneration in their health. The scientists in the Cell Discovery experiment said they deliberately infected the piglet kidney and lung cells with Chinese coronavirus, which allegeldy “showed significant cytopathic effects” as opposed to natural pigs.

Severe cases of Chinese coronavirus infection can cause extremely painful symptoms like multiple organ failure, difficulty breathing, pneumonia, and other life-threatening conditions, according to the World Health Organization (W.H.O.).

The scientists celebrated that their experiment yielded “large quantities” of piglets “in a short time.” The piglets could also be made to suffer from other diseases, they wrote, granting “a unique opportunity to combine these existing diseases to reproduce severe cases of COVID-19.”

You see the ChiCom pigs have already made their way to America
Look no further than in D.C.