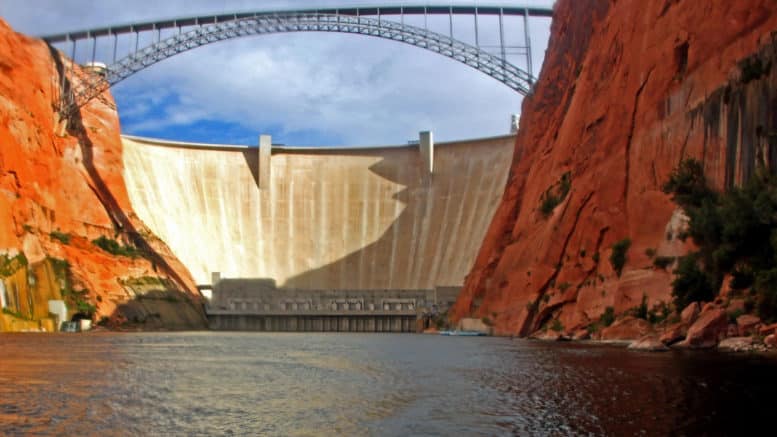 Please Share This Story!
PDF 📄
Former Secretary of the Interior Bruce Babbitt, originally started the policy of dam removal in America; he was a member of the Trilateral Commission, as was Bill Clinton and Al Gore.

Dam removal was part of the Trilateral Commission’s plan to implement Technocracy in favor of Capitalism and Free Enterprise, because it would reduce the abundance of cheap hydro-electric energy, paving the way for more controllable ‘alternative energy’ like wind turbines, solar panel farms, etc. ⁃ TN Editor

Environmental groups that have long pushed to bring down a huge dam along the Colorado River are suing the federal government, alleging it ignored climate science when approving a 20-year operating plan for the dam near the Arizona-Utah border.

Glen Canyon Dam holds back Lake Powell, one of the largest man-made reservoirs in the United States. It and Lake Mead, which straddles the Arizona-Nevada line, are key to ensuring Colorado River water gets to the 40 million people and the more than 7,000 square miles of farmland that depend on it.

Drought and climate change already have reduced the river’s flow, forcing seven Western states to adopt a plan earlier this year to ensure the lake elevations don’t dip too low.

The environmental groups — Save the Colorado, the Center for Biological Diversity and Living Rivers — have said climate change will lead to such scarcity of river water that Glen Canyon could become inoperable.

They sued the Bureau of Reclamation in U.S. District Court on Tuesday. Aside from wanting the dam’s 2016 operating plan to be revised, they want to force a discussion on draining Lake Powell and removing the dam.

“We need something new. It’s not working,” John Weisheit, co-founder of Living Rivers, said Wednesday. “It’s not true river restoration. We’re not getting sustainability for people or agriculture. We need long-term, visionary thinking and discussion, and this lawsuit will help create that.”

Bureau of Reclamation spokesman Marlon Duke declined to comment on the lawsuit.

The agency has disputed that it ignored climate science and said using Lake Mead as the primary or only reservoir on the Colorado River fell outside the scope of its study on Glen Canyon’s operating plan.

The plan allows for experimental releases of water to maintain hydropower and to mimic the river’s natural flow. High-flow experiments are meant to build sandbars through the Grand Canyon to benefit native fish like the humpback chub, create beaches for river rafters and protect archaeological sites.

Glen Canyon Dam sits at the edge of Page, Arizona. Completed in 1964, it’s the second-tallest concrete-arch dam in the United States, behind Hoover Dam near Las Vegas. While Hoover Dam is anchored in solid volcano-baked basalt, Glen Canyon Dam spans a gorge lined with sandstone.

Anne Castle was assistant secretary for water and science at the U.S. Interior Department when work began to revise Glen Canyon Dam’s operating plan. She said the initial environmental review included a “fairly extensive” discussion of climate effects and questioned why environmentalists would want it revised under an administration often criticized for rolling back regulations.

Castle said it’s unlikely Glen Canyon Dam would be built today but decommissioning it would have “really significant, adverse consequences for big sectors of the economy, and I don’t think that would be undertaken lightly.”

Jack Schmidt, director of the Center for Colorado River Studies at Utah State University, said the conversations that environmentalists are seeking already are happening about managing the entire Colorado River system.

The Glen Canyon Dam plan was an incremental decision about how best to operate the dam under existing and old paradigms, he said.

When negotiations start on what will guide the river beyond 2026 when current guidelines expire, he said “everything is back on the table.”