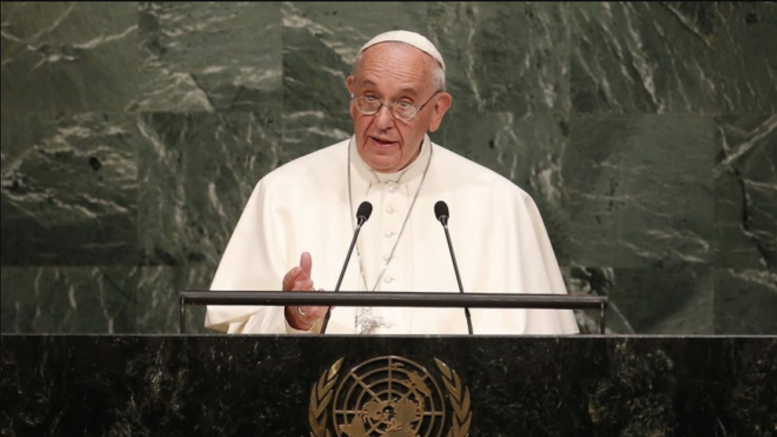 Please Share This Story!
PDF 📄
As time goes on, Pope Francis it becoming more and more radicalized towards Sustainable Development and worship of ‘Mother Earth’. Today’s language is perhaps the strongest yet, going back to his encyclical on the environment, Laudato Si. ⁃ TN Editor

Pope Francis employed some of his strongest environmental rhetoric to date Friday, insisting the planet earth is “sick,” “wounded,” and “bleeding.”

Writing to the president of Colombia, Iván Duque Márquez, on the occasion of World Environment Day, the pope said that “protection of the environment and respect for the biodiversity of the planet are issues that affect us all.”

“We cannot pretend to be healthy in a world that is sick,” Francis said. “The wounds inflicted on our mother earth are wounds that also bleed in us.”

“Caring for ecosystems demands a look to the future, one that is not concerned only with the immediate moment or that seeks a quick and easy profit, but rather one that is concerned for life and that seeks its preservation for the benefit of all,” he added.

The official celebrations of World Environment Day would have taken place this year in Bogotá, Colombia, but because of ongoing lockdowns because of the coronavirus will be held virtually, he noted.

“Our attitude toward the present state of our planet should indeed make us concerned for and witnesses to the gravity of the situation,” the pontiff stated in his letter. “We cannot remain silent before the outcry when we realize the very high costs of the destruction and exploitation of the ecosystem.”

“This is not a time to continue looking the other way, indifferent to the signs that our planet is being plundered and violated by greed for profit, very often in the name of progress,” he insisted. “We have the chance to reverse course, to commit ourselves to a better, healthier world and to pass it on to future generations.”

“Everything depends on us, if we really want it,” he said.

In his message, the pope also referenced the fifth anniversary of his encyclical letter on the environment, Laudato Sì, “which drew attention to the cry that mother earth lifts up to us.”

The only times that the earth has ever “bleed” is when oil and lava have flowed out of it because there was no longer a place to contain them therein.

Coming from a religion called Roman Catholicism whose leader calls himself ‘in place of Christ’ and even ‘heavenly father’ on earth, and who will encompass the entire earth as the World Religion under the name of Christ though a false one, the one that Jesus warned about “For many shall com in my name, saying, I am Christ; and shall deceive many. Then if any man shall say unto you, Lo here is Christ, or there; believe it not. For there shall rise false Christs, and false prophets, and shall shew great signs and wonders; insomuch that, if it were… Read more »

Sing out
Reply to  justysayin

You are ignorant of the Catholic faith, as your post shows. A pope is the “vicar” of Christ, as established by Jesus Christ Himself when he established the Church–against which He promised that the gates of Hell would not prevail. (We count on and depend upon His promise.) A pope does not call himself “heavenly father.” He is addressed by the laity as “Holy Father,” a title of respect. It is time for you to study true history, dumb-bell, not the screeds that atheists, protestants, and pagans write and promote. As for this “green pope,” it is he, not Earth,… Read more »

just sayin
Reply to  Sing out

You cannot dispute the murders of your own Roman Catholic Church for centuries. It is documented for all the world to see. You cannot dispute the rape of children by so called priests all over the world, it has been out in the open for all the world to see. None of what you say is in the Bible, you yourself have been lied too. There is no “Holiness” in any part of your Roman Catholic Church, you worship and pray to Mary. “But be not ye called Rabbi: for one is your Master, even Christ: and all ye are… Read more »

Remember it took the Pope 350 years of murders, prisoning, banning people and nations before he admitted Galilei was right and the earth was a globe.