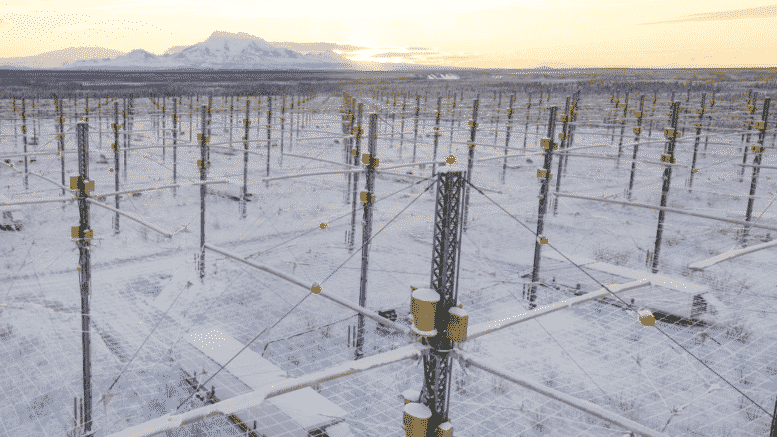 Please Share This Story!
PDF 📄
Geoengineering research is ramping up at Alaska’s High-frequency Active Auroral Research Program (HAARP) as taxpayer funds roll in from the National Science Foundation to build a companion observatory to study the effects of intentional manipulation of the upper atmosphere. ⁃ TN Editor

The Subauroral Geophysical Observatory for Space Physics and Radio Science will be housed at the High-frequency Active Auroral Research Program site in Gakona, Alaska.

The facility’s 33-acre Ionospheric Research Instrument will be the centerpiece of the new observatory.

No new construction is expected under the NSF funding to create the observatory, which will be a station at which researchers can monitor and receive data from instruments. The university hopes to add additional instruments over time at the $290 million Gakona research site.

The five-year NSF grant will allow scientists to investigate how the sun affects Earth’s ionosphere and magnetosphere to produce changes in space weather. Their work will help fill gaps in knowledge about the region, which is important because ionospheric disturbances can disrupt communications systems and cause damage and outages to power grids.

“We are very pleased that NSF has chosen to fund our proposal to create the Subauroral Geophysical Observatory in Gakona,” said Geophysical Institute Director Robert McCoy, who is the project’s principal investigator.

The grant provides funding for observatory operations, financial support for travel and time at the facility for scientists to conduct their experiments and education and community outreach. Research at the observatory is initially expected to include the study of various types of aurora and other occurrences in the ionosphere, which stretches from about 50 miles to 400 miles above the Earth’s surface.

For over 25 years, UAF, the Air Force, the Navy and the Defense Advanced Research Projects Agency have collaborated on ionospheric research at the High-frequency Active Auroral  Research Program site. As Air Force funding for research and development decreased, the scientific community worked to find a solution to preserve this one-of-a-kind national research resource.

In August 2015, the Air Force transferred the research equipment to UAF under an Education Partnership Agreement. The UAF Geophysical Institute operates the facility under an agreement with the Air Force.

The National Research Council in 2013 focused on the facility in both a decadal study and a workshop. Both called for increased use of active ionospheric research facilities and co-location of a full complement of diagnostic instruments.

“The subauroral and auroral zones are among the most fascinating, and challenging, regions for geospace research. The more we’ve studied them, the more they’ve taught us about our planet’s atmosphere and about near-Earth space,” said Robb Moore, program manager with NSF’s Directorate for Geosciences.

“The Gakona research site has already proved to be an invaluable resource, and this investment in the world’s most powerful high frequency transmitter sets it up as a producer of potentially significant discoveries for years to come.”

Not unless they stole it back from the University of Alaska, which took control some years back. If the University is being manipulated into allowing the military to once again use the facility at Gokona Alaska for clandestine operations, then it is they who need to be confronted. But, lets be honest here, the HAARP idea and concept is decades old and I believe the only reason they gave its operation to the U of A is because the military, (read DARPA) already have something better under wraps. Look up the book by Nick Begich, “Angels Don’t Play this HAARP”… Read more »