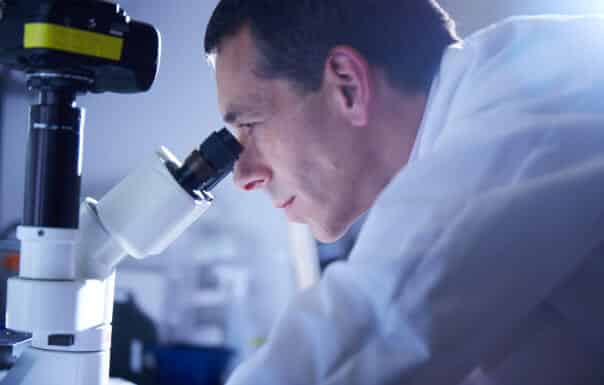 Professor Euan Ashley - Professor of Medicine and Genetics at Stanford University and one of the pioneers in the application of gene sequencing in medicine.

Please Share This Story!
PDF 📄
Transhumanist scientists are coming out of the closet world-wide, emboldened by the current unapproved and untested gene therapy injections for COVID-19. This Stanford geneticist calls it an ‘autocorrect’ vaccine that literally rewrites your DNA that will be passed to your offspring. ⁃ TN Editor

A groundbreaking “superhero” vaccine inspired by the DNA code of Olympic athletes could help transform society over the next decade, a top genetic scientist claims.

The vaccine would provide lifelong protection against three of the top ten leading causes of death, according to Euan Ashley, professor of medicine and genetics at Stanford University. The so-called “superhero” jab could offer simultaneous, long-term protection against heart disease, stroke, Alzheimer’s disease, and liver disease, thanks to advances in genetic engineering.

This breakthrough treatment would deliver the blueprint of “ideal” cells from men and women whose genes are more disease-resistant than those of the average person, together with an “instruction manual” to help the body “repair, tweak and improve” its own versions. A single dose could lead to a “body-wide genetic upgrade” that would cut the risk of premature death in some adults by as much as 50 percent.

When would a ‘superhero’ vaccine become available?

Ashley says the vaccine would be administered to those in serious clinical need before being rolled out to the wider population, including children. Clinical trials of individual components are expected to begin by 2026, with the combination vaccine to become available within 10 to 15 years.

If breakthroughs in genome research and technology continue to evolve at the same rapid pace, the vaccine could be widely available worldwide in just 10 years, according to Ashley, who is also the associate dean at Stanford University. Prof. Ashley, 49, is the founding director of Stanford’s Center for Inherited Cardiovascular Disease and its Clinical Genomics Program.

“Genomic medicine has been promised for decades, but thanks to advances in the field we are now reaching the stage where that promise is set to become reality, ushering in a bold new era of medical treatments,” the professor says in a statement to SWNS.

“We will soon have the genetic engineering tools to repair, tweak and improve DNA associated with a host of life-limiting diseases, to make us all less prone to developing these illnesses across our lifetimes. This isn’t, of course, to say that we can make people live forever, and we can’t guarantee life expectancy will increase, but it is likely premature deaths could be avoided in many cases,” Ashley continues.

“Advances in DNA modification mean the number of people with ‘superhuman’ genes—those who are more disease resistant—is no longer science fiction but, in the coming years, absolute science fact. Potentially millions of people could be impacted by this technology – a superhero jab, for want of a better description.”

“This has the potential to greatly reduce the burden of diseases with a genetic component such as Alzheimer’s disease, liver disease, coronary heart disease and associated conditions such as strokes, and vascular dementia,” the Stanford geneticist goes on to say. “It is not only possible, but probable, that such a jab will become available in the next 10 to 15 years, with the benefits of that treatment becoming apparent within the next two to three decades. If we modelled on fatal heart attacks alone then the new treatment could lead to as much as a 50 per cent reduction in incidence.”

An ‘autocorrect’ vaccine for your genes

Traditional vaccines work by teaching the immune system to recognize a foe by delivering a dead or weakened pathogen into the body. This triggers the immune system’s own antibodies to seek out the pathogens and the foreign proteins they carry and destroy them.

However, most genomic vaccines, including the proposed “superhero” shot, work by delivering strings of genetic code to certain cells. This code includes multiple versions of a “gene editor,” a tool like a word processor, which alters just one letter of DNA from a disease-prone version to a disease-resistant version.

To ensure that the gene editors reach the right organs safely and are not destroyed on the way to the body’s immune system, they are carried by inactivated targeting viruses or encased in lipids (fat particles) to the precise destination. The lipid technique is used by Pfizer-BioNTech to package its COVID-19 vaccine.

Scientists liken gene editing to the “autocorrect” feature used to correct spelling mistakes in documents written on a computer. Instead of rewriting words however, gene editing rewrites corrupt DNA. The technique is not new, but remains relatively untested, at least in humans.

Prof. Ashley says ongoing advances in the genome editing tool CRISPR (clustered regularly interspaced short palindromic repeats) will lead to “very significant” developments in the treatment of serious disease within the next decade. They are already considered to be easier and cheaper to make at scale.

“Gene editing is now coming of age, bringing with it the exciting possibility of preventing serious diseases in the population before they develop,” Prof. Ashley adds. “Not everyone will be susceptible to these diseases but, for those who are, this will be a revolutionary new approach to preventing disease.”

“There is still much to do, not least in terms of ensuring the medicine is safe, and nothing in genetic medicine is ever guaranteed, but as it now stands it looks likely that we may be able to avert a large number of heart attacks and strokes and perhaps many other diseases to keep people healthy and happy for longer.”

The likelihood of a “superhero” vaccine relies on finding real-life superhumans whose genes are uniquely resistant to disease, or those more capable of fighting them. An example is the Finnish Olympian Eero Mäntyranta, who was found to have an unusually high level of hemoglobin, indicating an excess of oxygen-carrying red blood cells, which boosted his endurance levels.

Other examples include American Sharlayne Tracy, who was found to have unusually low cholesterol levels, and an unnamed Pakistani boy who could not feel pain. The exact number of people with superhuman genes remains unclear, but is thought to include several million people worldwide.

Prof. Ashley believes genetic databases such as the UK BioBank, which currently holds health and genetic information on more than 500,000 people, will play a crucial part in genetic vaccine development. They have already uncovered superhuman genes for heart disease, liver disease, and Alzheimer’s disease, and could hold the key to cancer prevention and other terminal diseases in the future.

Will the lowermost cartel also be giving us our soaring-flying cars then, too? Or will all us “superheroes” just fly like Superman et al does? The carrot that SuperMengeles will be as loving gods & gift to the mass mortal wo/man Superhero-ness is absurd. So, of course, the pitch will sell like the proverbial hotcakes, or hot carrot cakes, to the otherwise verbless hotcake swallowers. “You will own nothing” (not that you own anything now), not even your DNA, & you will be even slap-happier than you are now. Drive it, & bake it (with sawdust flour) like you stole… Read more »

So there’s too many humans on the plane, we need to fight so called man made climate change , the answer keep as many of us alive living longer, yeah right.

We should be talking about the quadrillion dollar derivatives debt the elite’s owe. They aren’t going to lengthen anyone’s lifespan, unless its accompanied by genetic stupidity via brain development problems. Less expensive slaves will be their goal.
The “elites” have a $1.5-2.5 quadrillion dollar debt tied to their gambling in derivatives. The conversation should be on making them pay it.

Everything comes with a price. Even if they could deliver on this they’re not going to do it without asking for something major in return. People living longer is not part of their plan, or, should I say, any of us rabble living longer isn’t something they want.

Nothing is unmitigated, even when, or if, whatever it is is on the level. Nothing issuing from cartels is on the level. Among those interlocking mutts, one mitt washes the other ∞. And the un(ter)mit(ts are)i(rri)gated away. Watergate Hotel California (“I am not a crook”)… ♪♫♪ They livin’ it up at the Hotel California, What a nice surprise (what a nice surprise), Bring your alibis… Mirrors on the ceiling, The pink champagne on ice, And she said “We are all just prisoners here, of our own device,” And in the master’s chambers, They gathered for the feast, They stab it… Read more »

In 2013, in a US Supreme Court Case, Pathology v. Myriad Genetics, Inc., 569 U.S. 576, the court ruled that changing the human genome via an mRNA injection creates a new genome that can be patented and owned by the patent holder. Everyone who received the purported vaccine is now “patented” and owned as property by the Vermin. Everyone who has been jabbed is considered “trans-human”. Trans-humans are not considered natural, so have no Natural and Unalienable Rights. Trans-humans are not considered humans, so they have no human rights. Trans-humans can have no equal civil rights, because any standard of… Read more »

Crichton’s last novel, Next, out in ’06, takes all this “intellectual property legality” as its premise. Fun read, seemingly prescient, but also really just carrying ever present absurdity to denser & denser reductions. In the beginning was the w|o|r|d|s – the first & still the toughest supermax to break out of, or into, or to tear down. “Transhuman” is a thing, not a person? Well, guess what, that applies to “citizen,” too. IP attracts/incentivizes the wrong sorts of people – well, it was those same people that contrived IP – is diametrically opposed to ‘the prerogatives’ that define human value/values… Read more »