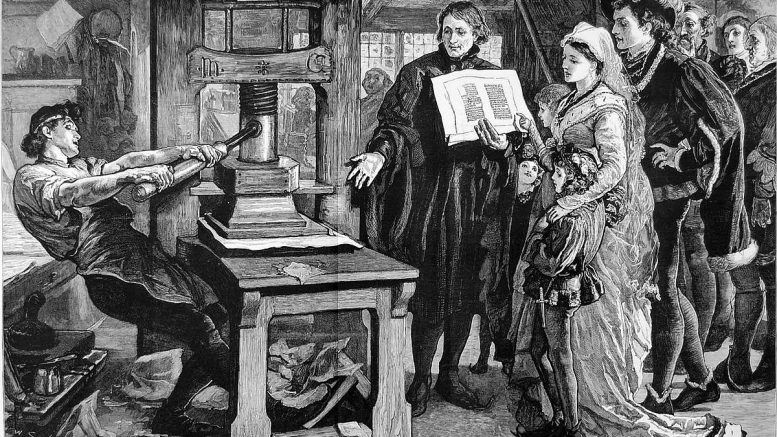 Access to Information Drove the Original American Revolution and the Final Phase now in Progress.

Elizabethan philosopher and scientist, Viscount Francis Bacon’s (1561-1626) ideas are considered to be the early basis of modern science. Perhaps his most well-known comment, “Knowledge is power,” is truer today than when he said it 400 years ago. For almost all of that time, the power elite controlled the information and thereby controlled the people. I spoke before about the current political situation in the US as being the final phase of the American revolution. For the second time in US history the people found a way to overcome the control of information. This ability marked the start and promoted the success of the Revolution. Now, it is marking the final phase and guaranteeing the continuance of the Revolution. However, as Benjamin Franklin said when asked if in negotiations they had settled for a republic or a democracy, he replied a republic, if you can keep it.  People now have access to information, if they can keep it.

Over the 400 years, various attempts by the people to overthrow the power elite failed. The French Revolution, as Macron is learning, changed nothing. The degree of the failure is given by the fact that Giscard D’Estaing, became President because the Giscard family purchased the D’Estaing portion from an extinct noble family. The words ‘de’ or  ‘d’’ in a French name is a sign of aristocratic heritage. Few were more arrogant and lorded it over the people than Charles de Gaulle. The same is true in England. Oliver Cromwell executed Charles I in 1649, but his son Charles II was returned to the throne just 11 years later in 1660. Marx never thought a revolution would occur in Russia. He was right, Putin is just another Tsar. Similarly, in China, the current President with his change of the rules to allow him a lifelong Presidency is just another Emperor.

People, especially people like John F Kennedy, acclaim the Magna Carta as a revolutionary document in the advance of freedom of the people. It wasn’t. It was a small group of power elite who controlled most of the land telling the King he was not treating them properly. The people back on their estates were serfs, essentially slaves to the property owner. Most of those lands are still controlled by a handful of people. A 2010 story in the Daily Mail says,

More than a third of Britain’s land is still in the hands of a tiny group of aristocrats, according to the most extensive ownership survey in nearly 140 years.

The private ownership of land was the second leg of American exceptionalism. It is the only country in the world formed to break that lock on land. It is the only country in the world that has free speech as its first amendment. I grew up in England knowing that the only place in that country where you could criticize the government was at Hyde Park corner. As a teenager, I heard a joke about the Corner that resonates even more with me in today’s environment.

The challenge for the American revolutionaries was to get their message out to the people without access to the newspapers. The British government controlled the newspapers because they were owned by the landed aristocrats. The power of the newspapers was well known at the time of the American Revolution. William Cowper’s poem “Progress of error” published in 1782 explains,

How shall I speak of thee or thy power address,
Thou God of our idolatry, the Press?
By thee religion, liberty and laws
Exert their influence and advance their cause;
By thee worse plagues than Pharaoh’s land befell,
Diffused, make earth the vestibule of Hell;
Thou fountain, at which drink the good and wise;
Thou ever-bubbling spring of endless lies;
Like Eden’s dead probationary tree,
Knowledge of good and evil is from thee.

“The pamphlets channeled and focused colonial resistance by framing dissent via appeals to history and political experience.”

I believe Benjamin Franklin is one of the most remarkable people who ever lived. His range of interests and expertise coupled with his ability to communicate with people at all levels and abilities is beyond equal. His major unique talent was to see events and anticipate their significance. He had a wider view but never with his eyes over the horizon as is the trait of fools. For example, as the first Postmaster General and familiar with the Gulf Stream and its impact on sailing times. He ordered the captains of ships carrying the mail to Europe to take water temperature readings, so they could go with the Stream going east and avoid it going west. This took five days off sailing times. It is no surprise then that Franklin developed the pamphlet and proved its value in bypassing the authorities. In a 1923 presentation, William Renwick spoke about Franklin’s early use of Pamphlets in the 1750s giving examples of his “dexterity and ability as a pamphleteer.” Twenty years later three significant pamphlets among many circulated in favor of the revolution were, Thomas Jefferson’s, A Summary View of the Rights of British Americans (Williamsburg, 1774); Thomas Paine’s, Common Sense (Philadelphia, 1776); and John Adams’, Thoughts on Government (Philadelphia, 1776).

Since the American Revolution, the Press, with the direct support and control of the power elite, reasserted itself. We are now at the point explained by A. J. Liebling that “Freedom of the Press is guaranteed only to those who own one.” In the period since the Revolution, the Press has expanded into the Media, but all the controls and condemnations of Cowper’s poem apply. The Press and the Media were now in control by determining who would win and who would lose. They decide who would win and who would lose. In archaic terms, they became the king-makers and the king-breakers. This means that anyone running for political office, especially the presidency, needed media support or a way of bypassing them.

There is no doubt that Hillary Clinton was totally convinced that the media would guarantee her election. It was a certainty with them on her side. She was so convinced that even when warning signs appeared she ignored them. In fact, the media didn’t let her down. They did everything they could to get her elected, but it failed. Why?

The Trump election was unique in several ways. He was not a politician. He overcame an attitude explained 2000 years ago by graffiti at Pompei that said when talking about leaders, if we get rid of this bunch of scoundrels, we just get another group of scoundrels. It meant that throughout history about thirty percent of the people never vote. Trump apparently realized that politicians had become professionals only interested in perpetuating their career. The result of this professionalism was a movement from the center as about 20% of the Democrats moved to the left and 20% of the Republicans to the right. This polarization is occurring in other countries such as the UK and France among others.

Trump benefitted from all these issues. He ignored the 20% 0n the left and right, correctly assessing they would never listen. He focussed on the 60% of the US in the middle, politically, and geographically. The swamp tried to deflect him by labeling him a populist. That charge tells you everything that is wrong in the swamp. Trump was doing the unthinkable, listening to the majority of the people and acting for them. Swamp-denizens know what is good for the people. It is impossible for this non-politician and the people to know what is good for them? Even Mitch McConnell expressed this view.

He brought a high percentage of those, approximately 30%, who never vote out to vote. However, he could never have done this without the ability to bypass the media and speak directly to the people. The modern equivalent of the Pamphlet was the Internet that allowed the final phase of the Revolution.

Trump could not have succeeded if the people did not have another access to information. The Internet, blogging, blog radio, eyewitness reports, and video clips brought information that provided a different perspective from that in the media. Through social media, people were able to discuss issues and hear viewpoints of fellow citizens as never before. It became a free market of ideas and expression. The professional politicians and media, collectively and correctly identified by Trump as the Swamp, considered most of Trump’s actions and behavior ‘Un-presidential.’ However, his use of Twitter annoyed them more than anything else, because it bypassed their control of information.

Trump understood the power of Twitter but was likely unaware of Cowper’s poem. Nonetheless, he echoed his words 236 years later. When asked to stop using Twitter he replied, I will stop using it when you stop telling lies. His charge of ‘fake news’ translates to Cowper’s “never-ending spring of endless lies.”

A measure of the threat of the Internet is given by how totalitarian governments control it. The threat is evidenced by Obama’s creation of net neutrality. The term is a typical meaningless phrase created by politicians to give an issue gravitas but is not threatening. Like all these liberal plans it is done using a ‘save the people from capitalists’ core. He claimed people were being exploited by Internet Providers (IP) and he was going to use the power of government to protect the poor, ignorant people. Trump kept another campaign promise by cancelling the program.

The recent Congressional hearings with Mark Zuckerberg were a façade of Democrats and Republicans blaming Facebook for bias so they could argue that government controls were necessary. In those hearings, both parties underscored their swamp membership. Only we, as professional politicians, know what needs to be done and it cannot include free and unfettered access to all information.

The battle over the internet and knowledge is the same as the battle over free speech. It is impossible to limit in any way because the minute you do, somebody is deciding what other people can say. Bacon was right, knowledge is power, but it is the sole property of the people and now they have it, they must never let go.