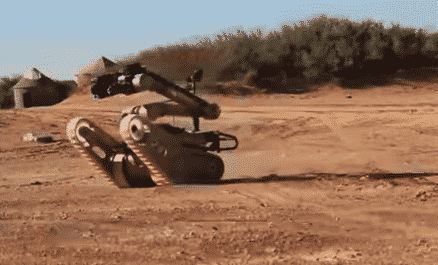 Technocrats will always choose a technological solution to any problem, in this case, how to kill the enemy. These weapons should be banned before they are fully armed and equipped with AI. The Army will spend over $1 billion on robots in the next few years. ⁃ TN Editor

From the spears hurled by Romans to the missiles launched by fighter pilots, the weapons humans use to kill each other have always been subject to improvement. Militaries seek to make each one ever-more lethal and, in doing so, better protect the soldier who wields it. But in the next evolution of combat, the U.S. Army is heading down a path that may lead humans off the battlefield entirely.

Over the next few years, the Pentagon is poised to spend almost $1 billion for a range of robots designed to complement combat troops. Beyond scouting and explosives disposal, these new machines will sniff out hazardous chemicals or other agents, perform complex reconnaissance and even carry a soldier’s gear.

“Within five years, I have no doubt there will be robots in every Army formation,” said Bryan McVeigh, the Army’s project manager for force protection. He touted a record 800 robots fielded over the past 18 months. “We’re going from talking about robots to actually building and fielding programs,” he said. “This is an exciting time to be working on robots with the Army.”

But that’s just the beginning.

The Pentagon has split its robot platforms into light, medium and heavy categories. In April, the Army awarded a $429.1 million contract to two Massachusetts companies, Endeavor Robotics of Chelmsford and Waltham-based QinetiQ North America, for small bots weighing fewer than 25 pounds. This spring, Endeavor also landed two contracts worth $34 million from the Marine Corps for small and midsized robots.

In October, the Army awarded Endeavor $158.5 million for a class of more than 1,200 medium robots, called the Man-Transportable Robotic System, Increment II, weighing less than 165 pounds. The MTRS robot, designed to detect explosives as well as chemical, biological, radioactive and nuclear threats, is scheduled to enter service by late summer 2019. The Army plans to determine its needs for a larger, heavier class of robot later this year.

“It’s a recognition that ground robots can do a lot more, and there’s a lot of capabilities that can and should be exploited,” said Sean Bielat, Endeavor’s chief executive officer. Specifically, he points to “the dull, the dirty and the dangerous” infantry tasks as those best suited to robotics.

During combat operations in Iraq and Afghanistan, the Defense Department amassed an inventory of more than 7,000 robots, with much of the hardware designed to neutralize improvised explosive devices (IEDs). Military brass were trying to quickly solve a vexing problem that was killing troops, but the acquisition strategy led to a motley assortment of devices that trade journal Defense News last year called “a petting zoo of various ground robots.”

This approach also meant that each “pet” was essentially a one-off device used for a single task. The Army’s current approach is to field more inter-operable robots with a common chassis, allowing different sensors and payloads to be attached, along with standardized controllers for various platforms, said McVeigh, a retired Army colonel.