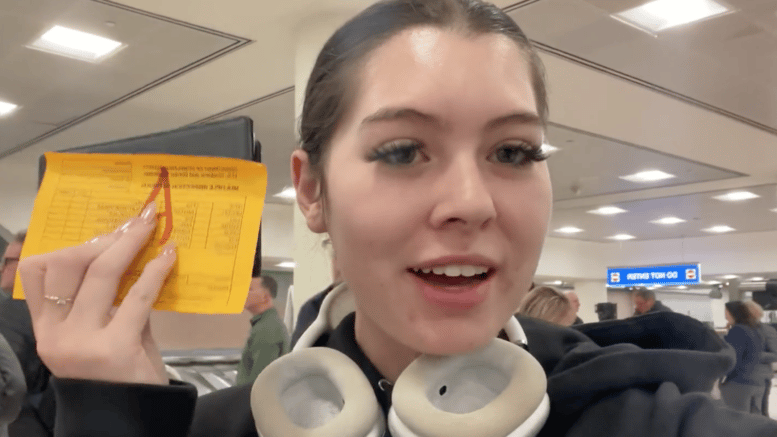 Morgonn McMichael is a full-time journalist and Ambassador with Turning Point USA in Tempe, Arizona. She travelled to Davos, Switzerland to cover the World Economic Forum, but on her return trip, she learned that her name had been added to a TSA list that resulted in her being detained and searched at five different security checkpoints, including her destination at Phoenix International Airport.

As an Ambassador, Morgonn has consistently gone above and beyond to empower and inspire America’s next generation of young conservative female leaders through patriotic online video content that has continuously amassed over 100,000 unique impressions every week on Instagram, TikTok, Facebook, and more.

Furthermore, Morgonn has gone on to speak at a number of our TPUSA chapters across the country, was featured on a breakout panel at this year’s Student Action Summit, and has been a guest commentator on Newsmax, Real America’s Voice, OAN, Breitbart, and more.

There will undoubtedly be more details on her story, but she has clearly been targeted by some Technocrat within the government who wants to send a message to all journalists who would dare to be critical of the WEF’s narrative. This is one of the most egregious violations of First Amendment rights in recent times.

UPDATE – Landed in the USA from Davos just went through border security and now my passport is detained and I have to be SEARCHED AGAIN with all of my luggage #WEF23 pic.twitter.com/7Nu1NO7BcK

Today I was explicitly told I was flagged and had my name on a list. This is what happens when Americans travel working to expose the evil. #FormerDetainee #WEF23 US Citizens searched 5 times in one day

“In fact what we are signing up for is a digital jail” @NoorBinLadin discusses the reality of digital surveillance systems. @Ezralevant then gives the real world perspective of how digital ID has already been weaponized and used against the citizens in Canada. #WEF23 pic.twitter.com/EoaFPh5Ufq

My how completely NAZI by the TSA

Yeah…nazi because you can’t think of a real totalitarian system without falling back on something that we were all rescued from by the Soviets?

You meant to say “rescued from the Nazis AND from the jackboot Soviet Communists by the Americans.” There. I fixed it for ya.

Nazi does capture the epitome of tyranny, right.
And it is Socialist and Totalitarianism all in one. Maybe because they are one in the same.