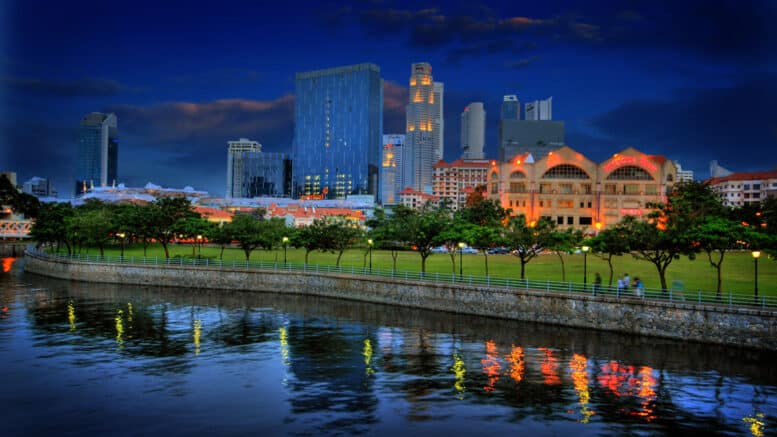 Please Share This Story!
PDF 📄
Singapore is long acknowledged as a Technocracy and is home to Parag Khanna, author of Technocracy in America.  The PR spin on Singapore claims it is a bastion of enlightened and progressive living, but the reality of actually living there is intolerant authoritarianism, massive and constant surveillance, curtailed rights. ⁃ TN Editor

On a hard disk somewhere in the surveillance archives of Singapore’s Changi prison is a video of Jolovan Wham, naked, alone, performing Hamlet.

In 2017, Wham was arrested for organizing a small protest on a metro train and charged with holding an illegal public assembly. Earlier this year, he was finally found guilty, and offered the choice of an SGD 8,000 ($5,900) fine or 22 days in jail.

Wham, like the protests he’s become known for, is quiet and animated by a kind of contained mischief. Born and raised in Singapore, he has spent most of his adult life as an activist, fêted by human rights groups, but portrayed as a foreign-funded bogeyman by the establishment. He is famous for protests that resemble a kind of performance art in the way they point out the absurdities of Singaporean order; he’s been arrested multiple times, convicted of holding a public assembly (on his own) and of scandalizing the legal system on Facebook.

Activism in Singapore is a complex task. The government has been controlled by a single party, the People’s Action Party (PAP), since independence. Over the years, the party has created a quasi-autocratic, quasi-democratic bureaucracy which is almost impossible for outsiders to navigate. Wham, who was executive director of a migrant rights group for a decade until 2016, was advised to lobby discreetly, to never be aggressively critical of policy or the party, and to avoid joining pro-democracy groups. Pushing too hard or stepping outside the lines would be counterproductive, he was warned, and would blow back on him and his work.

“I was tired of having to self-censor and ‘negotiate boundaries’,” Wham told Rest of World. “Such strategies only ended up entrenching authoritarianism.”

He turned to a more confrontational approach. By the time he was found guilty again in February, Wham had already been to jail twice. He declined to pay the fine, and went to Changi for the third time.

He went straight into solitary confinement for a fortnight, a measure introduced to prevent new inmates from spreading Covid-19 through the prison population. Prisoners were given tablet computers loaded with an approved list of books, mostly out-of-copyright classics. Bored, unravelling from the solitude, Wham started to perform. “I saw Hamlet. I was like, OK, I haven’t read this in 20 years. I remember liking it,” he said. “So I just did a lot of the soliloquies. Just acted everything out.”

That, and everything else he did from the moment he arrived in Changi, was recorded — he thinks. It’s hard to be sure. He was watched constantly by security cameras, some of which have microphones too. Prisoners don’t know when or if the feeds are watched by the guards. At least some are so-called smart cameras, though, which feed images in real time to a system called Avatar, which in turn is supposed to be able to detect aggressive behaviour. The cameras in every cell are a relatively new addition. The prison service declined a request for an interview, but former inmates told Rest of World that they started appearing over the last two years.

Inmates are watched for the length of their sentences, Wham said — something that’s justified as being for their own safety.

“This is the kind of narrative that’s always been put forward whenever someone wants to invade your privacy. And in Singapore, it’s a very effective argument,” he said. “ Nobody can argue against being safe.”

As in prison, so outside. Singapore has built a global brand out of its schoolmasterly for-your-own-good discipline, with disproportionately severe punishments — including the death penalty for drug smuggling — acting as a deterrent against disruptions to good social order. For those who stay inside the lines, it offers comfort, prosperity, and a textureless sort of freedom; the average citizen is expected to trust the government to deliver safety, in exchange for a certain loss of control over their individual liberties. Technology is becoming an increasingly visible part of that bargain.

Singapore is often rendered as an aspiring techno-utopia. In World Economic Forum videos, in-flight magazines and its own pliant state-backed media, it offers a soft-focus science fiction backdrop where driverless buses ply routes between beach clubs and tech hubs, where robot dogs enforce social distancing and flying taxis flit between glass-fronted public housing overflowing with lush “sky gardens.” It’s a place where pilot projects hint at a future — just over the horizon — where the intractable problems of today are automated out of existence. Where vertical farms and “NEWater” made from treated sewage cut the island’s reliance on neighbouring Malaysia for food and water. Where robots care for the elderly and drones service freighters. Where warehouses and construction sites are staffed by machines, obviating the need for the migrant workers who make Singapore function, but make Singaporeans uncomfortable. Technology keeps them safe, fed and independent; secure in a scary world, but connected to it through telecoms and air travel.

That safety requires constant vigilance. The city must be watched. The smart cameras that are being trialled in Changi are just a part of a nationwide thrust towards treating surveillance as part of everyday life. Ninety-thousand police cameras watch the streets. By the end of the decade, there will be 200,000. Sensors, including facial recognition cameras and crowd analytics systems, are being positioned across the city. The technology alone isn’t unique — it’s used in many countries. But Singapore’s ruling party sees dangers everywhere, and seems increasingly willing to peer individually and en masse into people’s lives.

“What [technology] will do for people is make our lives a hell of a lot easier, more convenient, more easily able to plug into the good life,” Monamie Bhadra Haines, an assistant professor at the Technical University of Denmark, who studies the intersection between technology and society. “But … the surveillance is what is here, now.”

It has a global reputation as one of the safest cities in the world, but Singapore’s national narrative is one of profound and enduring insecurity. Since being severed from Malaya in 1965 — both sides claim to have instigated the split — the “little red dot” dangling off the end of the Malay Peninsula has portrayed itself as an island of prosperity surrounded by hostile neighbours who covet its land and money. Singapore’s young men have to sign up for two years of military service, then stay on call for decades to come. Some weekends, the primary color vapidity of daytime radio is interrupted by broadcasts mustering the reserves to their battle stations, the callsigns sounding like the leftover echoes of some Cold War emergency.

The Singapore Air Force’s F-15 fighters fly regular sorties through the island’s airspace, coming out of Paya Lebar in the north and tracking over the hundreds of container ships that wait in the sheltered straits dividing Singapore from the Indonesian island of Batam, home to the triple threat of sinful massage parlours, outlet malls and religious fundamentalism. The jets sweep above the glass, steel and neon skyline of Marina Bay, where they buzz the iconic three-pillared Sands hotel and casino — a monument to vice, and the city-state’s flexibility of principles in the service of international capital. Beneath the towers, gondoliers punt along a subterranean faux-Venetian canal lined with luxury retailers and high-end food courts.

The land it sits on didn’t exist three decades ago. Most of Marina Bay was “reclaimed” — although the “re” feels a stretch — by dumping millions of tonnes of concrete and sand into the South China Sea. On the seaward side, new empty areas lie fallow, dark green with growth and seething with insects, as the land beneath them settles and hardens enough to support the foundations of another strata of skyscrapers between the old coastline and the new. The physical expansion of the nation is an aggressive defense against Singapore’s geographical limitations, a manifestation of how this tiny country sees engineering and technology as force multipliers and equalizers.

The country has “an almost uncritical faith in technology,” Adrian Kuah, a professor in public policy at the National University of Singapore, told Rest of World. “The history of the nation is written using the language of vulnerability and insecurity, and having to be one, five, 10 steps ahead of the competition.”

Speculative investments in novel technologies have undoubtedly helped propel Singapore’s economic development. Already one of the world’s busiest ports in the 1970s, the government offered sweeteners to attract technology manufacturers. By the 1980s, the country was the world’s largest producer of hard disks, and emerged from a recession in the mid-80s with a new philosophy: a unique, ideologically irreconcilable blend of Thatcherite capitalism and state control. The government courted the international banking sector with a mix of permissive regulations, low taxes and reliable infrastructure.

Singapore was a scary highly surveilled police state 30+ years ago. Founded by a radical socialist who believed 100% in authoritarianism. Secret police were everywhere.

[…] Singapore’s Technocracy Dream Is Turning Into A Surveillance State Nightmare […]