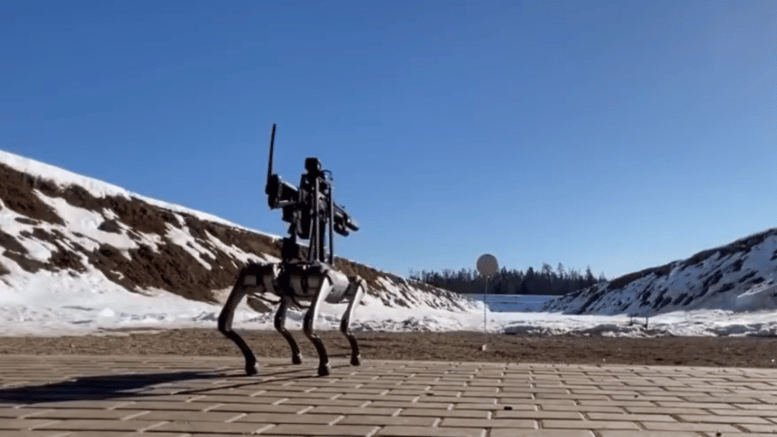 Please Share This Story!
PDF 📄
Technocrats build because they can, not because there is any good moral or ethical reason to do so. We have repeatedly warned against militarized robots able to use advanced AI, biometric identification and deadly armaments. Now, Technocrats have the ability to fully automate the killing of humans and the destruction of property. ⁃ TN Editor

Much like their flesh-made cousins, robot dogs do not lack attention on the internet. Many have seen the footage of Spot, a high-tech quadruped developed by the US-based company Boston Dynamics, flaunting its dance moves.

However, the latest addition to the robot dog content stream looks like something out of a science fiction movie. Twitter user Sean Chiplock shared a video of someone in Russia firing a gun from a quadruped robot.

Even though the post’s author discusses robots Boston Dynamics make, the one seen in the video is not made by the American company. As Sean Gallagher, a Senior Threat Researcher at Sophos points out, the robot dog is of Chinese origin.

All the people who laughed off the “worrywarts” years ago for freaking out about the Funny Dancing Robot Dogs ™ should be forced to watch this video once a day for the remainder of the year. pic.twitter.com/WBIrlGah3w

he design of the robot looks a lot like Go1 robot dog Unitree Robotics makes. For example, the back side of the device in the video exhibits a distinct pattern on a plastic covering between its hind legs. A similar design is visible on devices in Unitree’s promotional material.

The Hangzhou-based company is selling the Go1 model of the robot for $2,700 on its website, a fraction of over $75k that American-made Spot would cost its owner.

While the robot doesn’t seem to handle recoil very well with the gun on ‘burst fire’ mode, switching to a ‘semi-automatic’ setting allows the robot to hit targets without moving around too much.

The robot in the video has patches on its surfaces with insignia associated with the Russian military: a Russian flag on one side and what seems to be a Wolf, which Russian special forces use.

The original video was posted on Youtube by Moscow-resident Alexander Atamanov.

Recently reports came out that the US Army had agreed to send one of its two Boston Dynamic-made robot dogs to Ukraine, where it will carry out demining operations around the capital Kyiv.

The robot dog will help an American non-profit HALO Trust remove unexploded ordnance, including cluster munitions, and drag them to be safely exploded in batches far from civilians.

Although Boston Dynamics prohibits using the Spot platform as a weapon, its possible application for military and law-enforcement purposes is evident.

The robot dog trained alongside French troops in a reconnaissance exercise earlier this spring. However, its employment in the NYPD ended quickly last year after the public deemed it too creepy.

Fears that robot dogs will be used against humans have been vocal for several years. Most notably, a cult anthology TV series Black Mirror dedicated a whole episode, Metalhead, to the device in 2017.

The plot follows a group of humans hunted by a robot dog. Series creator Charlies Brooker said the inspiration for the episode came after he saw one of Boston Dynamics’ promotional videos.

dystopian
This suicidal word was introduced by someone – obviously a half-educated native speaker of English with little Latin and less Greek – who got Οὐτοπία ‘Noplacia’ mixed up with *Eὐτοπία ‘Goodplacia’, this latter the equally non-existent antonym of what he presumably thought of as *Kακοτοπία ‘Badplacia’. Cause: the Latin transliteration ‹Utopia› is written in its proper (Greek) letters as Oὐτοπία. In other words: Greek οὐ is transliterated into Latin as ‹u›.
‘A little knowledge is a dangerous thing’ (the Catholic 18th-century English poet Alexander Pope)

Yes, excuse you. This is not your platform. You can take it as it is or don’t take it at all.