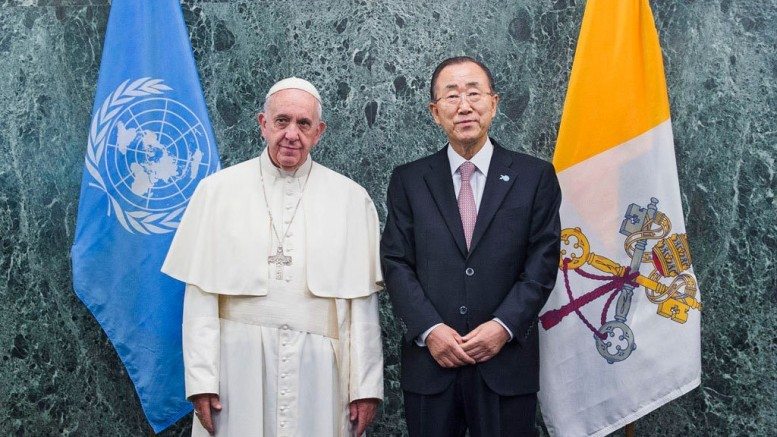 Please Share This Story!
PDF 📄
The major denominational churches of the world have been coopted and subsumed by Technocracy to actively promote it to their congregations. Pope Francis has turned to worshipping Gaia, the primordial earth goddess in Greek mythology, leaving the trappings of Christianity far behind. ⁃ TN Editor

We humans “must repent and modify our lifestyles” because of our abuse of Mother Earth, Pope Francis states in a message released Thursday.

In his Message for the Celebration of the World Day of Prayer for the Care of Creation, the pontiff decries the “mistreatment” of our common home stemming from “our consumerist excesses,” “tyrannical anthropocentrism,” “predatory economic interests,” and “short sighted and selfish actions” leading to “the collapse of our planet’s ecosystems.”

“In the first place, it is our sister, mother earth, who cries out. Prey to our consumerist excesses, she weeps and implores us to put an end to our abuses and to her destruction,” Francis declares in his Message.

Because of human irresponsibility “countless species are dying out and their hymns of praise silenced,” the pope laments, while the ancestral lands of indigenous peoples “are being invaded and devastated on all sides, ‘provoking a cry that rises up to heaven.’”

Because of the “climate crisis,” the poor disproportionately suffer the impact of “the drought, flooding, hurricanes and heat waves that are becoming ever more intense and frequent,” the pope asserts.

“Listening to these anguished cries, we must repent and modify our lifestyles and destructive systems,” Francis proposes, since the “present state of decay of our common home merits the same attention as other global challenges such as grave health crises and wars.”

The ecological conversion needed to bring about lasting change cannot simply take place at the individual level, the pope insists, but must be “also a community conversion” embracing multilateral solutions, “especially in the meetings of the United Nations devoted to the environmental question.”

In his Message, Francis also plugs the COP27 conference on climate change, to be held in Egypt in November 2022, which “represents the next opportunity for all to join in promoting the effective implementation of the Paris Agreement.”

The Holy See subscribes to the Paris goal of limiting temperature increase to 1.5°C, Francis states, which “calls for responsible cooperation between all nations in presenting climate plans or more ambitious nationally determined contributions in order to reduce to zero, as quickly as possible, net greenhouse gas emissions.”

“This means ‘converting’ models of consumption and production, as well as lifestyles, in a way more respectful of creation and the integral human development of all peoples, present and future,” he adds. “The transition brought about by this conversion cannot neglect the demands of justice, especially for those workers who are most affected by the impact of climate change.”

Along with the UN climate conference, Francis underscores the importance of a UN summit on biodiversity, to be held in Canada in December, as a way to address “the double crisis of climate change and the reduction of biodiversity.”

You first!…….WHEN are you PEDO GLOBALISTS going to repent for DESTROYING CHILDREN?!?!?!?!

Bergoglio is an ecclesiastical freemason, the fulfilment of “The Permanent Instructions of the Alta venditta” [19th century secret plan]; the term, ‘mother earth’ is exclusively pagan, so I’m not surprised by this impostor’s comments as I have been tracking his promotion of new age paganism since 2013; wolves like him promote paganism disguised with christian terminology, aka, gnosticism and doublespeak, in order to fool the uninformed and the gullible. The true pope is benedict XVI, that’s why he never left the vatican; it’s literally impossible for the Catholic Church to have two living popes at the same time, as that… Read more »

There were three at one stage, but at the next they all resigned and a new single one was elected.

Cornwall is GREAT. Thanks for posting this

Yep. I suppose the Woketards don’t know that word.

Spoken as a true Anti-Christ, this Pope is a curse on humanity.

Cult-Owned Pope: ‘Humanity Must Repent For Abuse Of Mother Earth’ - All View News

Except for you know, Genesis 1:26-28 where it explicitly states we are to have dominion over the Earth? Still not a good reason to be poor stewards over God’s creation, but this Pope is out of his Satanic mind. That we should all repent for “destroying” the Earth, yet it’s the top 1% flying around in jets, yachts, and living lavish lifestyles that actually have significant carbon foot imprints. Unreal.

How does anyone reconcile the fact that something created us and created all of the “evil” we endure? Then they say that the THING that created us deserves our loyalty? This is Stockholm syndrome at its most proficient execution.

Corporate elites have used the earth, and it’s citizens to create a very unfair greedy system that ONLY benefits them

The pope must repent of shilling for fasco-Marxism

I will, the moment after the CHURCH is dissolved and you evil pedophiles crawl back under the rock from which you came–leave, die, I don’t care.

Sick Pope. Sick Church. Sick accomplices to the UN/WEF/WHO and the tyranny they proposed for the world.

Pope Francis: ‘Humanity Must Repent For Abuse Of Mother Earth’ No, Jorge Mario Bergoglio, that’s NOT the truth and you know it, because it is written in the bible: « The earth also is defiled under the inhabitants thereof; because they have transgressed the laws, changed the ordinance, broken the everlasting covenant. Therefore hath the curse devoured the earth, and they that dwell therein are desolate: therefore the inhabitants of the earth are burned, and few men left.» (Isaiah 24,5-6) What are the laws we have transgressed? Well read Leviticus chapter 18 for instance. What is the everlasting covenant? Read John… Read more »

The greatest trick that “God” ever played was to convince the world that “He” wasn’t responsible for the evil in it.

[…] Pope Francis: ‘Humanity Must Repent For Abuse Of Mother Earth’ […]