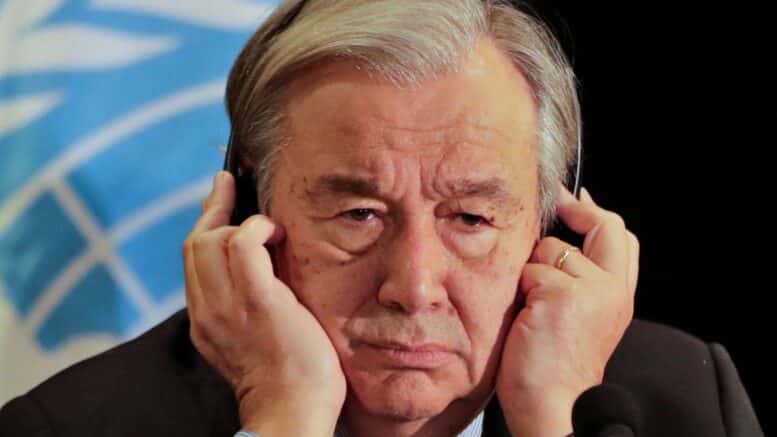 Please Share This Story!
PDF 📄
It’s a perfect extortion racket: obey us and do what we say or mother earth will take away your future and you will kill all future generations on earth. The traditional extortion only said, “Pay us every week or your business will burn down”. Of course, this is a crime but the UN gets away with the threats and nobody blinks an eye. ⁃ TN Editor

Climate experts commissioned by the U.N. will release what is claimed to be the definitive guide to “halting global warming” on Monday, in a report ordering how societies and economies must transform to ensure a “liveable” future.

The U.N.’s Intergovernmental Panel on Climate Change (IPCC) is responsible for the publication designed to shape the global climate response in the wake of the coronavirus pandemic.

AFP reports the IPCC published the first two instalments earlier this year in a trilogy of mammoth scientific assessments covering how greenhouse gas pollution is claimed to be heating the planet and what that means for life on Earth.

This third report will outline what to do about it.

“Governments have the lion’s share of responsibility to achieve net-zero emissions by mid-century,” Guterres said Friday when he announced the plan, adding this was particularly true for the Group of 20 major emerging and industrialized economies that account for 80 percent of greenhouse gas emissions.

Now two weeks of negotiations that have seen nearly 200 nations struggling to thrash out line-by-line a high-level “summary for policymakers” that distils the hundreds of pages of underlying assessment will be made public, according to AFP.

That meeting was supposed to wrap up on Friday, but dragged on through the weekend.

The IPCC assessment was originally due to be published publicly on Monday at 0900 GMT, but will now be released at 1500GMT.

When will people finally wake up to this gargantuan fraud?
“The Man Who Saw The Future” – https://windowsontheworld.net/video_type/5350/

UN housing Political criminals. Only they alone will destroy this planet as they are psychopaths.

What i’d like to see happen to the UN building on NYC i can’t type here.

Most people with a working brain understand that anthropogenic climate change is an ideological device created to flatten economies and pass ultimate control into the hands of a small cabal of mega-rich power-mad oligarchs. The planet is not warming; there is zero evidence that CO2, a component of the atmosphere necessary to all life is responsible for the small amount of warming which occurred twenty years ago. If the same amount of money was spent on eliminating pollution (a very real and imminent danger to us all, since it is all-pervasive .. atmosphere, food, land, and within drugs) .. the… Read more »