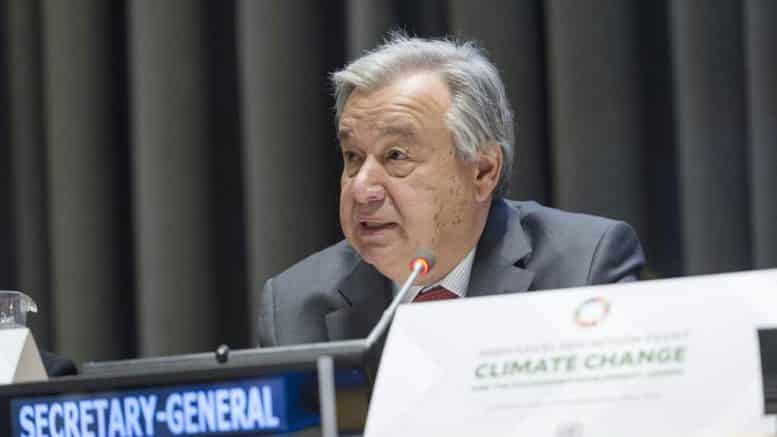 Please Share This Story!
PDF 📄
The U.N. is cheering high gas prices to teach the world a lesson about global warming. High prices are an intentional strategy to kill carbon-based energy in favor of walking, bicycling and resetting the global economy back to the 1800s. ⁃ TN Editor

The pain of soaring gas prices must be endured because any wider embrace of fossil fuels as an alternative is “madness” and threatens global climate targets, U.N. Secretary-General Antonio Guterres cautioned Monday.

If countries “become so consumed by the immediate fossil fuel supply gap that they neglect or knee-cap policies to cut fossil fuel use” a climate disaster is the guaranteed outcome, Guterres said in a pre-recorded address to the Economist Sustainability Summit.

The invasion of Ukraine has seen rapid rises in the prices of coal, oil and gas as countries scramble to replace Russian sources but Guterres fears these short-term measures might “close the window” on the Paris climate goals.

The BBC reports the veteran Portuguese Socialist also called on countries to fully phase out “stupid” coal by 2040 and endure the financial costs without complaint.

In his first major speech on climate and energy since COP26, Guterres lamented the limited progress achieved in Glasgow is insufficient to ward off “dangerous climate change.”

Guterres said carbon output needs to be cut in half by the end of this decade even as evidence shows emissions are set to rise by 14 percent.

“The problem was not solved in Glasgow,” Guterres pleaded in the speech. “In fact, the problem is getting worse.”

The war in Ukraine threatens to make that situation even more problematic, he said, with global energy shortages being turned around by countries that embrace coal or imports of liquefied natural gas as alternative sources.

Some globalist agencies have already said walking rather than driving must be considered an alternative in times of fuel shortages.

I think it would be MUCH better for the planet if the price of jet fuel would become prohibitively high. Of course that would probably decrease the ability of the rich and powerful to jet around the world, polluting the the atmosphere but I think they would willingly give up jet travel for the good of the planet, don’t you?

Well let him lsnd all who believe this lead the way,giving up their cars helicopters and boats and show us how to do it or shut up…

I hate these fascists’……. they make my blood boil! Disgusting creatures!

I have a finger for Guterres and his buddies. Guess which one.