This is the proverbial snake that ate its own tail. The WEF is gaslighting the entire world while virtue signaling to its own, saying everything is just peachy. They say that price increases do not reflect an alternative energy crisis, although it is totally clear that wind and solar can never power the entire world, and wherever they have been implemented, energy prices have increased. ⁃ TN Editor

Wherever you live in the world, energy prices are surging upwards. But a new global survey shows that people don’t blame climate policies for rising energy costs and strongly support moves to end the use of fossil fuels.

A survey of over 22,500 adults in 30 countries, conducted by Ipsos for the World Economic Forum, found that, on average, more than half of consumers expect rising energy costs to significantly reduce their spending power in 2022.

Results varied by country, however, with two-thirds of people living in South Africa, Japan and Turkey saying they expect to have less money to spend this year, compared to just over one-third in Switzerland and the Netherlands. People on low incomes and those aged 35 to 49 were most worried about their financial future.

But despite the impact on their financial situation, people remain strongly supportive of climate policies, with an average of 84% saying that it is important to them personally that their country moves away from fossil fuels to more sustainable energy sources.

This view was strongly held in all countries, ranging from 72% of people in Russia and 75% in the United States to 93% in South Africa and Peru; the strongest feelings about the importance of ending reliance on fossil fuels was found in emerging nations.

Although support was strong among all demographic groups, slightly more women (87%) thought it was important to move away from fossil fuels than men (81%). 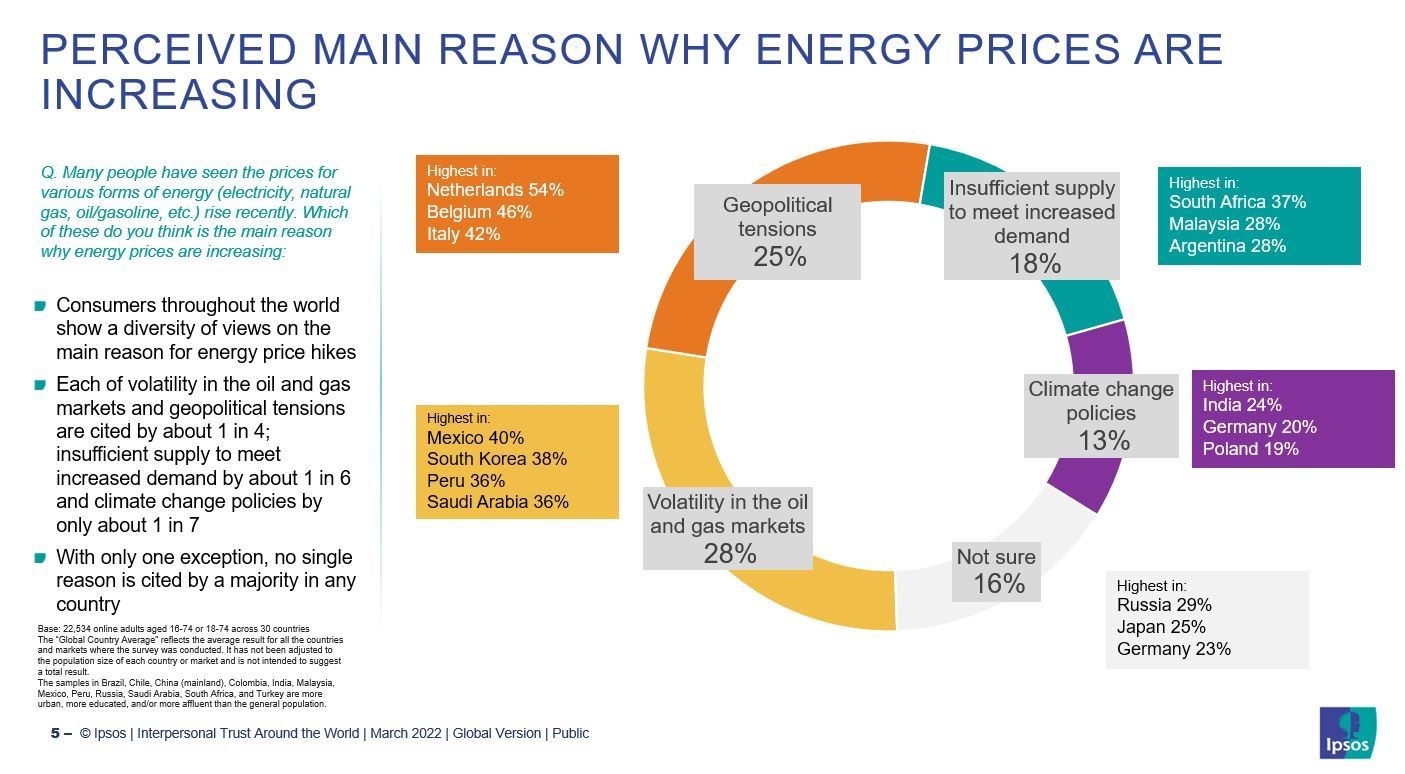 Only 13% of those questioned blamed climate policies for rising energy prices, with most naming volatility in oil and gas markets and current geopolitical tensions as the primary causes. Almost one in five said insufficient supply to meet demand was to blame.

Policies to tackle climate change were most commonly blamed in India where 24% of people thought they were the cause of energy price rises, followed by a fifth of people in Germany and 19% in Poland. Almost a fifth of business decision-makers shared that view.

The Netherlands was the only country where a majority of people identified a single cause for price rises, with 54% citing geopolitical tensions. Over two-fifths (46%) of people in Belgium and 42% of people in Italy agreed this was the main cause.

“Unfortunately, we are once again seeing claims that volatility in gas and electricity markets is the result of the clean energy transition,” International Energy Agency Executive Director Dr Fatih Birol wrote in a recent blog.

“These assertions are misleading to say the least. This is not a renewables or a clean energy crisis; this is a natural gas market crisis. It is important to work from a sound evidence base on the causes of the current market turbulence.”

This is not the”Clean Energy”they’re calling it. Whenever I look at these wind turbines, dominating many ridge lines here in Wales, together with agricultural land covered with Solar Panels that no one knows how to recycle, I see despoliation.

Liar liar your house is on fire.
And it is not because of global warming. Or global cooling. Or climate change. Or whatever your next lie will be.

Surveys are easy to skew. I’m sure the WEF knows how to do it.

More lies and gaslighting from the arrogant elitists.

Unlike the ‘People’s Pandemic’ (TM), climate lockdowns will be resisted by the same people who enjoyed drinking wine in their back gardens for months on end, whilst ‘working from home’ – for the reasons I outline here (5) WILL YOU ACCEPT CLIMATE LOCKDOWNS? – YouTube

So many lies here it’s difficult to address. Lies, lies, lies through 24/7 propaganda. NEVER believe them. If the UN/WEF makes a definitive comment about anything, anything at all, it’s the opposite of what they speak. That’s the way to discern any truth about their plans, executed or desired.