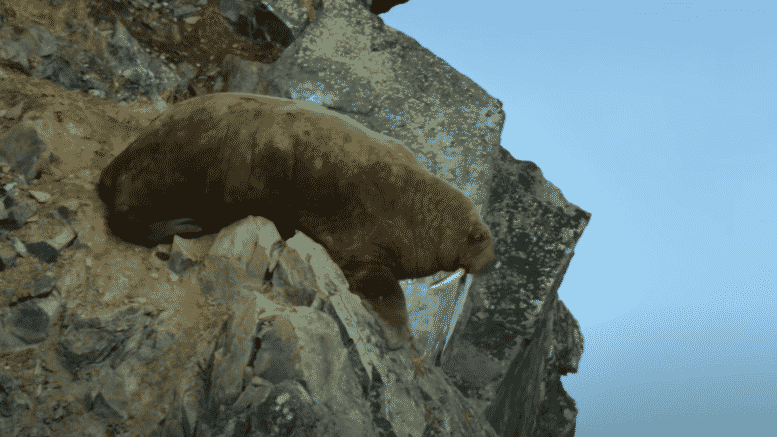 Please Share This Story!
PDF 📄
To stampede the world into the Great Reset, aka Sustainable Development and Technocracy, Technocrat environmentalists have no ethical boundaries when fabricating pure fiction in order to sell their narrative. In this case, shameless story-telling blames walrus deaths on global warming. ⁃ TN Editor

This story — courtesy of polar bear expert Susan Crockford — may explain the fanatical enthusiasm with which the globalist elite are pushing the Net Zero carbon emissions agenda at this week’s online World Economic Forum conference as part of their drive towards the Great Reset. The billionaire’s club appears to have bought wholesale into a radical green propaganda narrative heavily promoted by prominent activists like Sir David Attenborough and sympathetic large corporations such a Netflix.

The story begins two years ago at the WEF’s 2019 Davos, Switzerland conference, where billionaire delegates were treated to an exclusive preview screening of a forthcoming nature documentary series presented by Attenborough.

Highlight of the screening was heartbreaking footage of walruses — as many as 800 of them — plunging off cliffs to their deaths on the rocks below. According to Attenborough’s narration at the time, man-made climate change was to blame for this unusual behaviour. This, he suggested, was because global warming had melted their natural hunting grounds.

Here is how Attenborough put it on the original voiceover:

Their natural home is out on the sea ice, but the ice has retreated away to the north and this is the closest place to their feeding grounds.

Every square inch is occupied, climbing over the tightly packed bodies is the only way across the crowd — those beneath can get crushed to death.

In a desperate bid to avoid the crush, they try to head towards the cliffs.

A walrus’s eyesight out of the water is poor. But they can sense the others down below. As they get hungry, they need to return to the sea.

In their desperation to do so, hundreds fall from heights they should never have scaled.

We can reasonably assume that Attenborough reiterated this version of events when he introduced the private screening at Davos two years ago, when it moved the audience to tears.

The Davos elite’s reaction is mentioned in a blog post written by Anatoli Kochnev, the on-site ‘scientific advisor’ who helped the Netflix crew to film the walruses in Ryrkaypiy on the coast of the Chukchi Sea.

Some of the important economic and political bosses are said to have been unable to hold back tears while watching the film in Davos.

This reaction was common among viewers across the world. The story about walruses driven to their deaths by climate change caused an outpouring of grief on social media.

But it subsequently emerged that the version of events presented in the Netflix documentary was not an accurate one.

Yes, the walruses were indeed plunging off the cliffs to their deaths. But it wasn’t climate change that was responsible — it was predatory polar bears, deliberately driving them off the cliffs as a feeding strategy. And this wasn’t new behaviour: it had been observed several times before, so it seems extraordinary to say the least that a well-funded Netflix wildlife documentary team would not have been aware of the fact.

Attenborough himself tacitly acknowledged his error when the walrus material was rehashed on a subsequent documentary for the BBC. This time, he blamed the walrus deaths not on climate change but on those predatory polar bears.

But by then, of course, the damage had been done.

The Mr. Magoo Presidency    Many of you may remember Mr. Magoo as the character in an old cartoon from the 1960’s starring an elderly, wealthy, short-statured retiree who gets into a series of comical situations as a result of his extreme near-sightedness, compounded by his stubborn refusal to recognize the problems he encounters.    Joe Biden in his fog of confusion is the incarnation of Magoo.  As our new President stumbles into office while inheriting an America in troubled times, Sleepy Joe will bounce from one crisis to another becoming the most inept American President in modern times. President Magoo will… Read more »

Was this FAKE NEWS eliminated from YT, GOOGLE, TWITTER, NETFLIX, AMAZON–Basically, the FAANG corporate liars? Of course not. I’m certain it’s still running as absolute truth when it’s a lie, as usual.

Those ‘crying billionaires’ care about one thing–profit–not truth, noble or otherwise. If they have to lie like dogs they will. It’s nothing more than the typical hostile behavior they always, always direct toward the public. Their take is if you are stupid enough to believe their lies then you deserve whatever you get. That’s the manner in which they have always operated.

It is not a zero sum game to plug a falsehood ( to promote some agenda) and then quietly retract the error. People tend to believe the first thing they hear, then eventually wake up after the damage has been well and truly done. Often the lie persists in to perpetuity (like the Nazis were “right wing” when they were Socialists or the Jews killed Jesus when it was the Romans.) It is not the first or last time this has been done. There was a similar fake crisis brought out just before the Paris Accord-it created the conditions to… Read more »