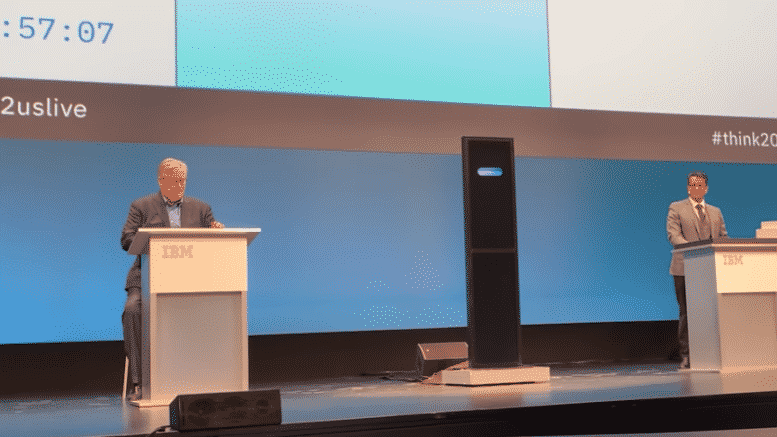 Please Share This Story!
PDF 📄
Now computer AI can argue with you. IBM again pushes the envelope with its advanced AI software/hardware to take on a champion human debater, but it lost. The next debate may turn out differently. ⁃ TN Editor

The subject under debate was whether the government should subsidize preschools. But the real question was whether a machine called IBM Debater could out-argue a top-ranked human debater.

The answer, on Monday night, was no.

Harish Natarajan, the grand finalist at the 2016 World Debating Championships, swayed more among an audience of hundreds toward his point of view than the AI-powered IBM Debater did toward its. Humans, at least those equipped with degrees from Oxford and Cambridge universities, can still prevail when it comes to the subtleties of knowledge, persuasion and argument.

It wasn’t a momentous headline victory like we saw when IBM’s Deep Blue computers beat the best human chess player in 1997 or Google’s AlphaGo vanquish the world’s best human players of the ancient game of Go in 2017. But IBM still showed that artificial intelligence can be useful in situations where there’s ambiguity and debate, not just a simple score to judge who won a game.

“What really struck me is the potential value of IBM Debater when [combined] with a human being,” Natarajan said after the debate. IBM’s AI was able to dig through mountains of information and offer useful context for that knowledge, he said.

It was the second time IBM Debater took on humans in public, though it’s taken part in dozens of debates behind Big Blue’s walls. In the first IBM Debater competition, the AI defeated one human debater soundly while losing a closer competition with another. This time, though, the human opponent was tougher — indeed, IBM researchers involved in the years-long project expected their AI would lose.

IBM Debater lost, but there’s no question it won in a way: Listening to it, you evaluate what it’s saying, not just that it’s a computer saying something. The machine marshaled its argument, broke that down into a few points and backed them up with data from various studies. It wasn’t perfect, but it was on point.

And, weirdly for an AI, it told us how Homo sapiens ought to behave.

“Giving opportunities to the less fortunate should be a moral obligation for any human being,” IBM Debater said.