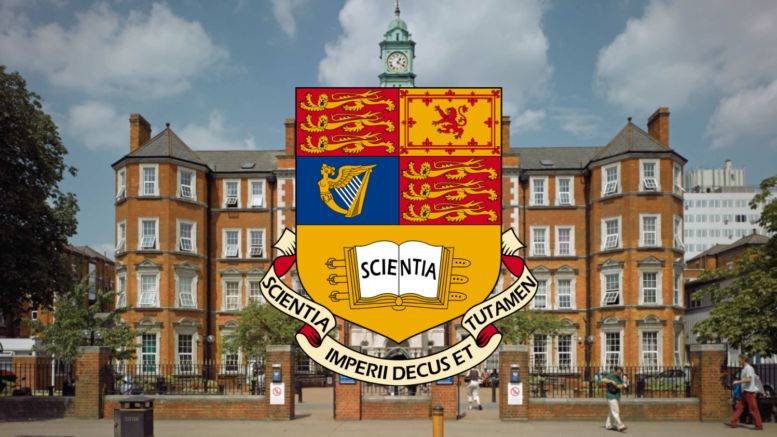 Please Share This Story!
PDF 📄
My recent article, The Common Roots Of Climate Change And COVID-19 Hysteria is again proven correct that the U.S policy has been unduly influenced by Imperial College and its lead statistician, Neil Ferguson, PhD.

Considering that Imperial College is a leading social activist with a well-known agenda for climate change hysteria and Sustainable Development, it has no business whatever in American politics. Imperial’s true historical agenda follows the United Nations in perfect harmony: destroy Capitalism and Free Enterprise in order to usher in the UN’s Sustainable Development, aka Technocracy.

In other words, this entire debacle, originally “spooked” by Imperial, the World Health Organization and the United Nations, is not about COVID-19 at all.

Oh world, you had better wake up to send these carpet baggers packing lest you fall into George Orwell’s vision of the future: “imagine a boot stamping on a human face – forever.  ⁃ TN Editor

Leading disease forecasters, whose research the White House used to conclude that 100,000 to 240,000 people will die nationwide from the coronavirus, were mystified when they saw the administration’s projection this week.

White House officials have refused to explain how they generated the figure – a death toll bigger than the United States suffered in the Vietnam War or the Sept. 11, 2001, terrorist attacks. They have not provided the underlying data so others can assess its reliability, and have not provided long-term strategies to lower that death count.

Some of President Trump’s top advisers have expressed doubts about the estimate, according to three White House officials who spoke on the condition of anonymity because they were not authorized to speak publicly. There have been fierce debates inside the White House about its accuracy.

At a task force meeting this week, according to two officials with direct knowledge of it, Anthony Fauci, director of the National Institute of Allergy and Infectious Diseases, told others that there are too many variables at play in the pandemic to make the models reliable: “I’ve looked at all the models. I’ve spent a lot of time on the models. They don’t tell you anything. You can’t really rely upon models.”

Robert Redfield, director of Centers for Disease Control and Prevention, and the vice president’s office have similarly voiced doubts about the projections’ accuracy, the three officials said.

Jeffrey Shaman, a Columbia University epidemiologist whose models were cited by the White House, said his own work on the pandemic doesn’t go far enough into the future to make predictions akin to the White House fatality forecast.

“We don’t have a sense of what’s going on in the here and now, and we don’t know what people will do in the future,” he said. “We don’t know if the virus is seasonal.”

The estimate appeared to be a rushed affair, said Marc Lipsitch, an epidemiologist and the director of Harvard University’s Center for Communicable Disease Dynamics. “They contacted us, I think, on a Tuesday a week ago, and asked for answers and feedback by Thursday, basically 24 hours,” he said. “My initial response was we can’t do it that fast. But we ended up providing them some numbers responding to very specific scenarios.”

Other experts noted that the White House didn’t even explain the time period the death estimate supposedly captures – just the coming few months, or the year-plus it will take to deploy a vaccine.

Almost the entirety of what the public knows about the death projection was presented on a single slide at a briefing Tuesday from the White House coronavirus task force. A White House representative said the task force has not publicly released the models from which it drew, out of respect for the confidentiality of the modelers, many of whom approached the White House unsolicited and simply want to continue their work without publicity.

A representative for Fauci did not respond to a request for comment. A spokeswoman for Vice President Mike Pence declined to comment. On a Thursday call with conservative leaders, Pence said that it was “difficult” to view the models but that “the president thought it was important to share with the American people.”

Among epidemiologists, the estimate raised more questions than it answered – not just about methodology and accuracy but, perhaps more importantly, about purpose.

The primary goal of such models amid an outbreak is to allow authorities to game out scenarios, foresee challenges and create a coherent, long-term strategy – something some experts worry doesn’t exist within the White House.

“I wish there were more of a concerted national plan. I wish it had started a month and a half ago, maybe two months ago,” Shaman said.

Natalie Dean, a biostatistician who was not involved in the White House effort but is working on coronavirus vaccine evaluation with the World Health Organization, pointed out that “the whole reason you create models is to help you make decisions. But you have to actually act on those projections and answers. Otherwise, the models are useless.”

At Tuesday’s briefing, Trump announced the government’s projected death count, saying it was based on data “that has been, I think, brilliantly put together.”

The coordinator of Trump’s coronavirus task force, Deborah Birx, then projected a slide with a high-arcing mountain showing the worst-case scenario: 1.5 million to 2.2 million deaths if Americans and the government did absolutely nothing to stop the virus. And a smaller – but still imposing – hill with 100,000 to 240,000 deaths if measures such as social distancing are taken.

Birx said the projection was based on five or six modelers, including from Imperial College in Britain and Harvard, Columbia and Northeastern universities. “It was their models that created the ability to see what these mitigations could do, how steeply they could depress the curve,” Birx said, referring to the trend line on a graph depicting infection counts.

But two models appeared to have been particularly influential: the one by Imperial College and one from the Institute for Health Metrics and Evaluation at University of Washington (IHME).

At a news briefing Sunday, Birx explained the process this way: Her task force initially reviewed the work of 12 models. “Then we went back to the drawing board over the last week or two, and worked from the ground up, utilizing actual reporting of cases,” Birx said. “It’s the way we built the HIV model, the TB model, the malaria model. And when we finished, the other group that was working in parallel – which we didn’t know about,” referring to the IHME group.

The IHME model initially that estimated deaths through this summer would total 38,000 to 162,000 – a lower projection than many others and beneath the White House’s own estimate. But because of its lower figure and Birx’s comments, experts believe it to be a main source for the White House’s best-case scenario of 100,000 to 240,000 deaths.

Meanwhile, the White House appeared to rely on Imperial College for its worst-case scenario. That study estimated as many as 2.2 million US deaths if no action were taken, 1.1 million deaths if moderate mitigation strategies were adopted, and an unspecified number if drastic measures were taken.

Neil ferguson builds his models with the assistance of the mathematical modelling group at the University of East Anglia. The UAE Climate Reseatch Unit is of course teh epicentre of climate modelling world wide. They were doing it before James Hansen. They are not scientists. They don’t relsease data and they don’t release code so peer review in the original sense is imporssible. The modern system of review of papers by referees not requiring the full disclosure developed by the Royal Society.

Citizens wake up: https://www.youtube.com/watch?time_continue=405&v=5pIMD1enwd4&feature=emb_logo Heh, maybe we should be doing the same thing? What you think? “…..Take heed that NO MAN deceive you.” Said Jesus in Matthew 24:4