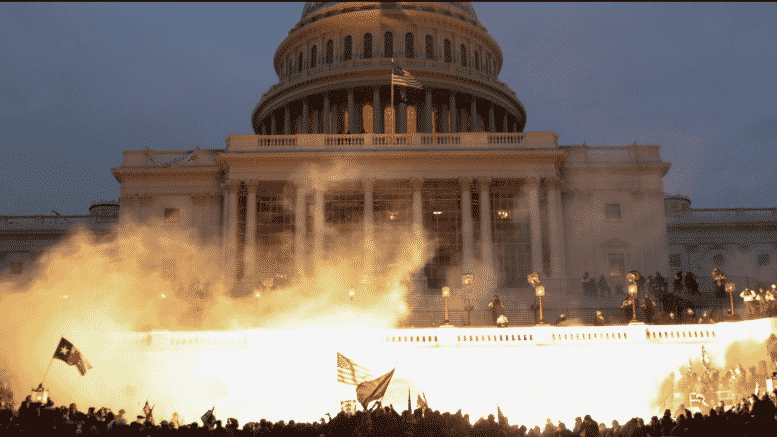 Please Share This Story!
PDF 📄
History buffs will find many similarities between Germany’s famous Reichstag Fire and the so-called “storming of the Capitol” in Washington, DC. When viewed in light of Technocracy’s coup d’etat, it might help clarify what’s ahead in 2021. ⁃ TN Editor

The media are already spinning a narrative around the events in Washington DC. One that bears no resemblance to reality, does not hold up to any kind of scrutiny and will have massive, far-reaching consequences for all of us.

They’re calling it “one of the darkest days in our nations history”, a day that will “live in infamy”. It will likely be memed into a shorthand date – 1/6/21, like 9/11 and 7/7. It will be the day “American democracy was attacked and prevailed”, the day the nation nearly fell to “fascists”.

It will become just one more grand sweeping illusion upon which the teetering structures of US Imperial power are built.

The story we are being told goes as follows:

Acting according to Trump’s wishes, and with his endorsement, these domestic terrorists overran the police barricades in an attempt to overthrow the senate and preserve Trump’s presidency.

Fortunately the police were able to secure the situation, drive the violent rioters out and the democratic process was able to continue.

Not one single part of this story is true:

Let’s tackle them one at a time.

1. There was no “storming”. Rather videos show police opening barriers to let the “rioters” in.

In the entrance hall, the “violent thugs” respected the velvet ropes and kept in orderly lines, took a few selfies with the cops, posed for the press and – when the main events were over – they were quietly allowed to leave.

Compare and contrast the police’s treatment of those people inside the capitol, with their later treatment of protesters breaking curfew on the streets.

2. There was no “incitement”. All of Trump’s social media posts on the subject instructed people to “go home” “with peace and love”.

Is that inciting violence?

Twitter and facebook took the totally unprecedented step of completely removing those posts, and blocked him posting any further. They claimed to be preventing further violence, but it looks more like they concealed Trump’s denunciations of violence.

The only person reportedly killed or injured was a protester allegedly shot by the police. Compare and contrast the attitude of the media to this “violence”, vs the “fiery but mostly peaceful” protests all last summer.

4. The riot ended Trump’s presidency. Although the Congressional session was widely described in the press as the “confirmation vote” for Joe Biden’s election victory, it was actually rather more than that.

VP Mike Pence was chairing a joint-session which intended to allow full speeches from those opposing the election and maintaining there had been fraud.

The violence brought this session to an end prematurely, totally undermined Trump’s legal and procedural challenges and killed any chance he had of overturning the electrical college vote. No sooner was the “attack” over, than many of the Republicans in both houses who were planning to oppose Biden’s election backed-down

More than that, it seems Trump’s “incitement” of the rioters means he may well be removed from office by enforcement of the 25th amendment, which would end not just this term, but make it illegal for him to run again in the future.

Facebook and Twitter have outright banned him from posting. The press and television pundits are openly accusing him of treason and sedition.

So, who has really benefitted from the “chaos at the Capitol”? Because it surely isn’t Donald Trump.

One should always be wary of any event which “accidentally” achieves the exact opposite of its stated or apparent intent.

In the title, I refer to this as America’s Reichstag fire, and that’s not just emotive language, the parallels are pretty clear: A staged attack on a political building, deliberately misattributed to political enemies and used to consolidate the power of a freshly installed leader.

Even the media coverage is similar, the Nazi government and their tools in the press talked about it in the same exact terms as the US establishment is describing this farcical “coup attempt”. Aiming to terrify people into thinking they were on the verge of an all-out civil war.

Read this quote, and ask yourself if it couldn’t be lifted almost completely from the front page of the Washington Post or New York Times today:

The burning of the Reichstag was intended to be the signal for a bloody uprising and civil war. Large-scale pillaging in Berlin was planned for as early as four o’clock in the morning on Tuesday. It has been determined that starting today throughout Germany acts of terrorism were to begin against prominent individuals, against private property, against the lives and safety of the peaceful population, and general civil war was to be unleashed…

Within 24 hours of the Reichstag burning, the German President had passed the Reichstag Fire Decree, which declared a state of emergency that totally reversed every civil right the Weimar Republic had guaranteed its citizens:

Articles 114, 115, 117, 118, 123, 124 and 153 of the Constitution of the German Reich are suspended until further notice. It is therefore permissible to restrict the rights of personal freedom [habeas corpus], freedom of (opinion) expression, including the freedom of the press, the freedom to organize and assemble, the privacy of postal, telegraphic and telephonic communications.

While these freedoms have already been severely undermined in the US by the Patriot Act and its successors, those few rights left to American citizens will definitely be under threat once Trump is finally removed and Biden (or Harris) is put in his place.

Although there is not yet any talk of legislation, it’s certainly true there are whispers of purges and other measures to “protect the constitution”.

Some prominent voices are calling for all lawmakers backing Trump to be expelled from office. The Washington Post claimed “seditious Republicans must be held accountable”.

The anti-social media campaign has begun again in earnest too, with Parler and GAB already being blamed for allowing “violent language” on their platforms.

As Twitter and Facebook limit discussion, alternative platforms will be shutdown. Enforcing a corporate monopoly that cooperates with the state…the very definition of fascism.

It puts in mind Huey Long’s famous quote when asked if fascism would ever come to America:

Sure, we’ll have Fascism in this country and we’ll call it anti-Fascism.”

All that they claimed happened is nothing but garbage, they had to have the last word. How can people be so cruel and evil to our President Trump and his followers, to make up all this garbage and some people believe it? So much hatred for our President, since the day he took office. We have to put into God’s Hands, He is the only one that can take care of everything. Karma is waiting, God doesn’t like ugly and he’s not crazy about pretty. But we’ll wait and see what happens to all of them in the future. Let’s… Read more »

“[…] a protester allegedly shot by the police.“ The video shows an unarmed woman in the crowd being shot in the neck at point-blank range by a uniformed man just inside the main door by which the crowd was entering. She subsequently died.

Interesting!
Surely agreed to most part.
We all are witnessing mass censorship in action, justified by this fake event. Is it not brilliant, were it not for the fact that this has happened many times?

They are exposing themselves. I do genuinely believe people are awake. Unlike 9/11, this will be interesting to follow in coming weeks. They know we know.

Great article….but…I just want to point out…it’s not the “electrical” college, but the “electoral” college, a way of preventing the most populated states from carrying national elections by their huge numbers of voters,