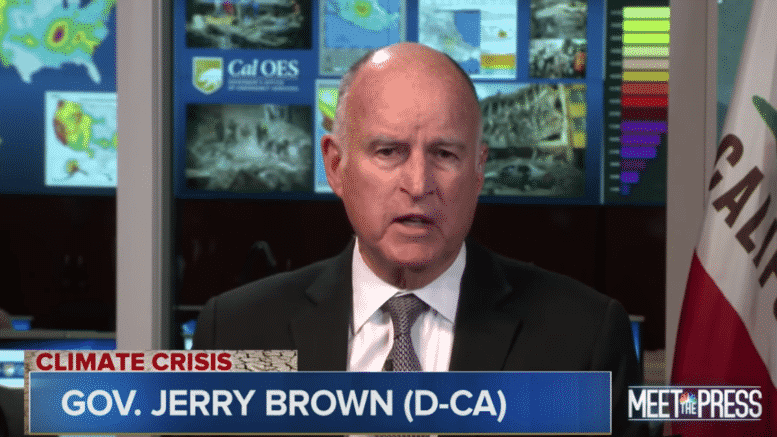 Please Share This Story!
PDF 📄
Jerry Brown and Al Gore share a common delusion about global warming, and the resultant radical alarmism that always seems to accompany it. Is Global Warming really an enemy of humanity like Hitler in WWII? ⁃ TN Editor

California Democratic Gov. Jerry Brown warned that America and the rest of the world are falling behind in the fight against climate change and likened the challenge to fighting the Nazis in World War II.

In an interview for Sunday’s “Meet the Press,” the outgoing governor called on President Donald Trump to take the lead in addressing the issue. “Instead of worrying about tariffs, I’d like to see the president and the Congress invest tens of billions in renewable energy, in more-efficient batteries, to get us off fossil fuel as quickly as we can,” Brown said.

“I would point to the fact that it took Roosevelt many, many years to get America willing to go into World War II and fight the Nazis. Well, we have an enemy, though different, but perhaps, very much devastating in a similar way. And we’ve got to fight climate change. And the president’s got to lead on that.”

President Trump has repeatedly downplayed the importance of addressing climate change during his presidency.

Last month, he brushed aside a federal climate report that warned of a “cascading effect” from climate change that could hurt both the planet and the economy, telling reporters “I don’t believe it.”

Last year, he pulled America out of the international Paris Agreement meant to align the world’s nations toward reducing emissions and curbing the effects of climate change.

And his administration has also rolled back a handful of Obama-era environmental regulations aimed at reducing the impact of climate change.

Trump visited Brown and his home state earlier this year to survey wildfire damage. Brown admitted that while he appreciated Trump approving disaster funding for the state in the aftermath of the fires, he doesn’t think he made any progress convincing Trump about the dangers of climate change.

“He is very convinced of his position. And his position is that there’s nothing abnormal about the fires in California or the rising sea level or all the other incidents of climate change,” Brown said.

Former New York City Mayor Michael Bloomberg, the billionaire who has made climate change a key piece of his work outside of public office, also lamented Trump’s views on the issue.

“It would be a lot more helpful, if we had a climate champion, rather than a climate denier, in the White House,” Bloomberg said.

“You know, I’ve always thought, Trump has a right to his opinions. But he doesn’t have a right to his own facts. And the truth of the matter is this country and this world is in trouble.

Interesting. Jerry Brown’s FACTS are not everyone’s FACTS. He should do some research and stop his blantant stumping for the UN mercenaries who are/have been making billions off the climate change hysteria propaganda–exactly how it was meant to work for them. I’m guessing that rather than learning about any other scientific reports on the weather from real sciencists with real data who didn’t falsified theirs (MANN), he will be back in the news soon contining to promote his UN buddies’ version of climatae truth. All hail the UN! Bow YOU PEASANTS!