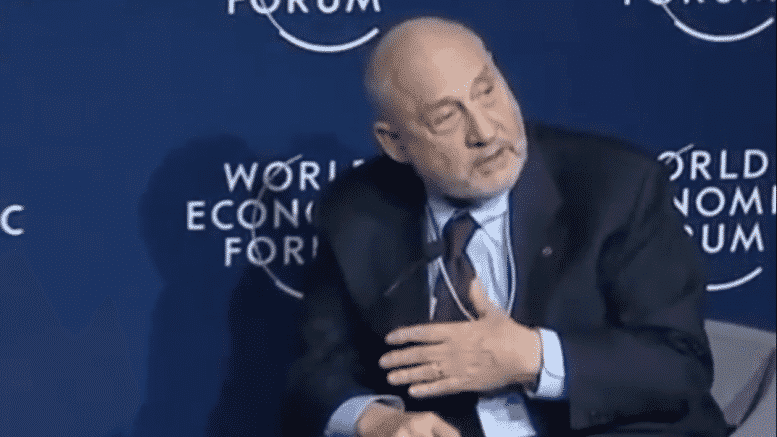 India was the ‘test case’ for gong cashless, and it was so successful that the United States is next in the crosshairs. This isn’t about staving off corruption, but rather implementing Technocray. ⁃ TN Editor

Indian Prime Minister Narendra Modi has already removed 86% of his country’s currency from circulation in an attempt to curb tax evasion, tackle corruption and shut down the shadow economy.

Joseph Stiglitz, Nobel Prize-winning economist, thinks so. Phasing out currency and moving towards a digital economy would, over the long term, have “benefits that outweigh the cost,” the Columbia University professor said on day one of the World Economic Forum’s Annual Meeting in Davos.

Stiglitz was speaking in the session Ending Corruption alongside Mark Pieth from the Basel Institute of Governance and APCO Worldwide Founder and Executive Chairman Margery Kraus. Stiglitz and Pieth co-authored a report, Overcoming the Shadow Economy, in November last year.

Quantifying the scale of the problem, Stiglitz said: “You can put it into the context of one of the big issues being discussed in Davos this year – the backlash against globalization, the darker side of globalization … The lack of transparency in global financial markets, the secrecy havens that the Panama Papers exposed, just reinforced what we already knew … There is a global framework for both corruption and tax evasion and tax avoidance.

One of the countries that has not done enough to fight corruption is the US, Stiglitz went on to say, and one remedy could be to phase out cash and embrace digital currencies.

“I believe very strongly that countries like the United States could and should move to a digital currency,” he said, “so that you would have the ability to trace this kind of corruption. There are important issues of privacy, cyber-security, but it would certainly have big advantages.”

Stiglitz is not the only Davos economist to make the case for a “less-cash” society. Harvard’s Kenneth Rogoff has argued for two decades that a society awash with cash contributes to the growth of the underground economy. Rogoff believes large-denomination bank notes, rarely used by ordinary people and businesses, should be phased out. “Cash facilitates crime because it is anonymous, and big bills are especially problematic because they are so easy to carry and conceal,” he says in this article.

Give the American people Liberty; or give us Death. You have no right as university professors to OUTLAW “tax avoidance” which has never been illegal where “tax evasion” is illegal. How stupid. The American people have been toppled by the NWO to submit to a regulatory environment where any and everything the federal government (employees & beneficiaries) does is legal while anything Ma & Pa conservative do to conserve what little income they receive remaining available to them is removed. Socialism steals Liberty from We The People. Elitism has been dressed down by Trump’s election while he is being discredited… Read more »

Moving from cash to a digital currency is pure Marxism. Marxist Government is seeking control of the means of exchange, when it seeks to move from cash to a digital currency. Why not call out Marxism for what it is? Stiglitz is a Marxist! Total Marxism is control of the means of production, distribution and exchange, as existed in the former Soviet Union. That Marxism ended in disaster. The atheistic Marxist Government wants to be god and wants to control everything and everyone. Marx is the most influential economist of all time. That is why the US is more Marxist… Read more »

Desmond, Marxism and democracy have fulfilled their usefulness and are on the way out. Technocracy is taking over, which will lead to scientific dictatorship. If you don’t believe this, then read globalist scholar Parag Khanna’s new book, “Technocracy in America: Rise of the Info-State”.

Do your business in cash. The less they have to play with, the less corruption we’ll see in the markets. This notion supports an underlying conundrum. Who’s to say how big government ought to be in the process of regulating trade?

The solution is embarrassingly obvious. Legalize ALL drugs and AGGRESSIVELY prosecute pedophilia / human trafficking / organ harvesting as CAPITAL crimes. That would effectively nullify their bogus, smokescreen excuses for banning cash. It would also expose their real underlying objective for banning cash: total centralized monitoring and capture of everybody’s wealth. How will they capture our wealth? Well, for one thing, civil asset forfeiture is still in its infancy, and they clearly intend to grow it to the size of Godzilla. For another, they intend the most draconian tax enforcement conceivable. Then they can safely rename Earth, “Zion.” Trouble is,… Read more »