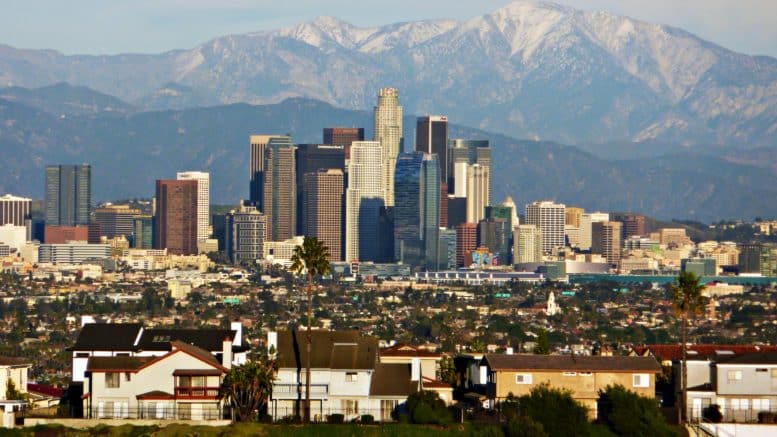 Please Share This Story!
PDF 📄
Los Angeles is aspiring to become a City-State unto itself as it honors the Paris Climate Agreement and creates its own Green New Deal, delivering “environmental justice and equity through an inclusive green economy.” ⁃ TN Editor

Mayor Eric Garcetti today released Los Angeles’ Green New Deal, which sets aggressive goals for the city’s sustainable future, tackles the climate emergency with accelerated targets, strengthens our economy and our middle class, and sets L.A. on course to be carbon neutral by 2050.

“Politicians in Washington don’t have to look across the aisle in Congress to know what a Green New Deal is — they can look across the country, to Los Angeles,” said Mayor Eric Garcetti. “With flames on our hillsides and floods in our streets, cities cannot wait another moment to confront the climate crisis with everything we’ve got. L.A. is leading the charge, with a clear vision for protecting the environment and making our economy work for everyone.”

L.A.’s Green New Deal is guided by four key principles: a commitment to uphold the Paris Climate Agreement; a promise to deliver environmental justice and equity through an inclusive green economy; a plan to ensure every Angeleno has the ability to join the green economy by creating pipelines to good paying, green jobs; and a determination to lead by example within City government, showing the world what an urban Green New Deal looks like in practice.

The Green New Deal leads with bold action to zero out Los Angeles’ main sources of harmful emissions: buildings, transportation, electricity, and trash. Our accelerated goals and new targets include:

The Green New Deal’s targets solidify L.A.’s position as the national leader in solar energy, electric vehicle infrastructure, and green jobs. It incorporates initiatives from 44 partner organizations, employing a unique, collaborative, multi-sector approach to meeting our shared goals of a more sustainable, equitable city. Our plan also calls for a 50% reduction in greenhouse gas emissions by 2025 — outpacing the standards set by the United Nations IPCC report.

Taken together, by 2050, the work and milestones of our Green New Deal are expected to save more than 1,600 lives, 660 trips to the hospital, and $16 billion in avoided healthcare expenses each year.

The City has already met or exceeded 90% of the pLAn’s near-term goals on time or early, and Angelenos have seen the results: L.A. became the number-one solar city in America, pioneered new transportation technologies, reduced the city’s greenhouse gas emissions by 11% in a single year, and created more than 35,000 green jobs.

Here’s a glimpse at some of the other measures and accomplishments that have set Los Angeles on a path to carbon-neutrality by 2050:

For more information, or to download a copy of L.A.’s Green New Deal, visit: plan.lamayor.org

Support for L.A.’s Green New Deal from Key Community Partners
Andres Ramirez, L.A. Clean Energy Coalition: “The Los Angeles Clean Energy Coalition applauds Mayor Garcetti for establishing the Green New Deal in our city. This is a great day for Los Angeles! LACEC commits to helping the city reach its goal of 100% renewable energy by 2045. We also applaud the plan’s vision to champion equity and establish a goal to improve the Cal Enviro Screen scores of frontline communities in L.A.”

Mike Brune, Executive Director, Sierra Club: “Mayor Garcetti’s Green New Deal for Los Angeles is an example of the strong leadership and bold action we need in communities across the country to transition beyond dirty fuels and prevent the worst of the climate crisis. Los Angeles is stepping up to inspire the nation in how a city can transition to a clean energy economy that is rooted in equity to ensure everyone can access clean, affordable energy and new career opportunities.”

Mark Watts, Executive Director, C40 Cities: “Los Angeles’ pLAn sets a framework for what a green new deal means in action. The emissions reductions it targets are consistent with delivering on the ambition of the Paris Climate Agreement and keeping global temperature rise to within levels that scientists say are manageable. Thanks to Mayor Garcetti’s vision, all Angelenos will enjoy a healthier, more prosperous and sustainable future. Cities around the world are watching closely and taking inspiration from Los Angeles, because this is the thriving, low-carbon future we need being created before our eyes.”

Mary Leslie, President of the Los Angeles Business Council: “We applaud Mayor Garcetti for his leadership on sustainability and taking bold action to accelerate the city’s goal, attracting new investment and doubling the clean energy jobs over the next 15 years. Now is the time to make strong investments in our clean energy future. We look forward to achieving these goals in partnerships with business and community leaders.”

Veronica Padilla-Campos, Executive Director of Pacoima Beautiful: “We appreciate the leadership of Mayor Garcetti in establishing our city’s plan in the fight against climate change.  L.A.’s Green New Deal sets the important precedent of prioritizing environmental justice communities. We applaud the establishment of the Climate Emergency Commission to include communities such as Pacoima in the implementation of the plan. We look forward to working with the Mayor in making sure our city’s Green New Deal is rooted in equity and benefits communities most in need.”

Bahram Fazeli, Policy Director at Communities for a Better Environment: “We really appreciate that Mayor Garcetti has made it clear in L.A.’s Green New Deal that a just transition away from fossil fuels and towards creating a strong clean energy economy must start with protecting front-line communities.”

Michael Kadish Executive Director of GRID Alternatives Greater Los Angeles: “Mayor Garcetti understands that facing the challenge of climate change is not only a responsibility, but an opportunity. We will continue to work with him to make sure that the jobs and benefits created by the Green New Deal are available to everyone in Los Angeles.”

A green new deal… including feces on the streets, huge garbage piles infested with vermin, and outbreaks of diseases that haven’t been seen in the Western world since the 17th century. Welcome to the NWO’s brave new world.

A detailed plan for failure. Nice. Tell me how the GND helps the tens of thousands of homeless polluting the streets of LA?

Awesome! Let LA prove the absolute inanity and folly af this asinine plan to spare the rest of us the pain of having to live through it’s utter failure. Its like lighting an exploding cigar.