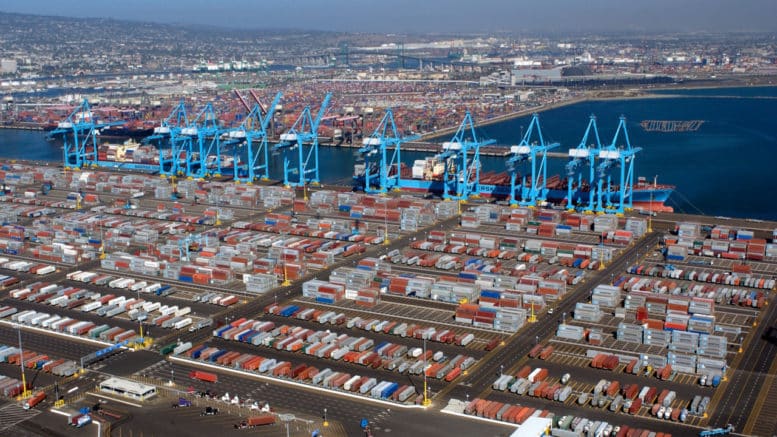 Pier 400 in Los Angeles is North America’s largest shipping terminal. More than 1,700 trucks pass through, on average per day, even in the middle of the U.S.-China trade war. All that cargo translates into thousands of miles driven within the facility each day, mostly by diesel vehicles, spewing pollutants.

For APM Terminals, the part of global shipping company A.P. Moller-Maersk A/S that runs the Los Angeles terminal, the future of cargo handling looks like the future of driving: electric motors replacing gasoline engines, autonomous software replacing human workers. The company says the changes are necessary to meet California rules requiring container terminals to reach zero emissions by 2030 and to keep business from leaving for other coasts.

The Los Angeles terminal has already ordered an electric, automated carrier from Finnish manufacturer Kalmar, part of the Cargotec Corp., that can fulfill the functions of three kinds of manned diesel vehicles: a crane, top-loader and truck. With enough of those, APMT could eliminate 65,000 miles driven daily by diesel trucks and cranes.

There would be fallout, though. The move to a robotic, emission-free operation may cut the need for workers such as Anthony Armijo, a part-timer who has spent 15 years picking up leftover dock shifts. “I just don’t understand what we’re going to be doing in the future,” he said. “I’m an American citizen. You would think they would have a way for us to make a living.”

The International Longshore and Warehouse Union, which represents dockworkers across the West Coast, has gathered support from local, state and federal politicians for its effort to prevent the municipal board running the port from letting the company proceed with its plans. Los Angeles Mayor Eric Garcetti, who has set his own emissions targets as part of his Green New Deal, is brokering negotiations for a deal this month.

The conflict is one of many pitting progressive clean-energy initiatives against blue-collar jobs threatened by changing technology.

“Automation is the path of history,” said Dan Sperling, a member of the California’s Air Resources Board and professor of civil engineering and environmental science at the University of California, Davis. “The questions are how much automation really makes sense, and how do you deal with the disruption to the workers?”

Wim Lagaay, president and chief executive officer of APM Terminals North America, sees cleaner, safer systems that meet the demand for quicker shipping as a way to secure the future of the port, which drives billions of dollars in economic activity. “If you don’t have a competitive port, you don’t have volumes, you have nothing,” he said. “Jobs will change, jobs will be created, jobs will be eliminated.”