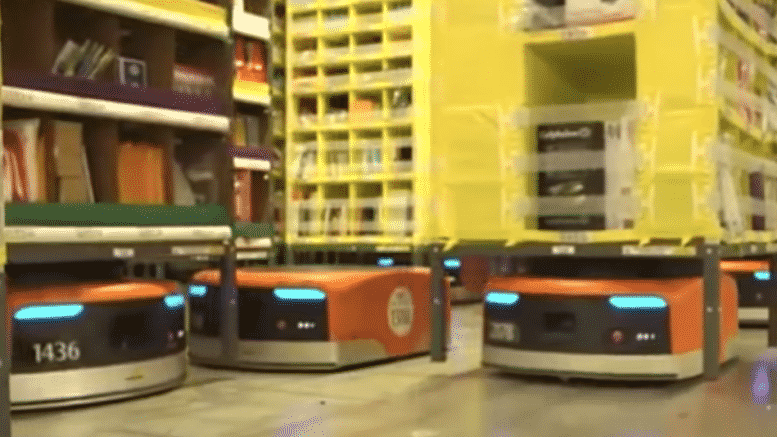 The Technocrat inventors behind this anti-human movement of displacing human work are building a system that will control every facet of human existence. There is no moral or ethical restraint whatever. Universal Basic Income (UBI) is being positioned as the Technocrat solution, which will result in a permanent slave-class of humanity from which there will be no escape. ⁃ TN Editor

Automation could destroy as many as 73 million U.S. jobs by 2030, but economic growth, rising productivity and other forces could more than offset the losses, according to a new report by McKinseyGlobal Institute.

“The dire predictions that robots are going to take our jobs are overstated,” says Susan Lund, the group’s director of research and co-author of the study. “There will be enough jobs for everyone in most sectors.”

Yet maintaining full employment will require a huge overhaul of the economy and labor market that rivals or exceeds the nation’s massive shifts from agriculture- and manufacturing-dominated societies over the past 165 years, the report says.

“I think it’s going to be a difficult transition,” Lund says.

Machines and artificial intelligence are already spreading rapidly with the advent of with self-driving cars, software that can respond to customer service inquiries and robots that can man assembly lines, flip hamburgers and check store inventory.

In a study early this year, McKinsey found that about half of all work activities globally have the technological potential to be automated, but the new report provides a more realistic assessment based on economic, social and technical factors. It concludes that from zero to a third of work activities could be displaced by 2030.

In the U.S., 39 million to 73 million jobs could be destroyed, but about 20 million of those displaced workers can be shifted fairly easily into similar occupations, though they may take on slightly different tasks, the report says. That means 16 million to 54 million workers — or as much as a third of the U.S. workforce — will need to be retrained for entirely new occupations.

Globally, up to 800 million workers could be displaced and as many as 375 million may need to learn new skills for new occupational categories. Advanced economies such as the U.S. that have higher wages are more vulnerable to the adoption of labor-saving technology.

The employment growth needed to replace the jobs eradicated will come in part from automation itself — the new workers needed to operate the machines, as well as the increased productivity and economic growth that automation will generate through bigger company profits and higher wages. Also, however, jobs will be created from rising incomes and consumption, an aging population that will demand more health care professionals and investment in infrastructure and renewable energy, the study says.

Jobs most susceptible to automation are physical ones in predictable environments. Those include workers who operate machinery, prepare fast food, collect and process data, originate mortgages and do paralegal and accounting work.

Jobs safest from the effects of automation involve managing people, high-level expertise and unpredictable environments. They include engineers, scientists, health care providers, educators and IT professionals, as well as gardeners, plumbers and elder care providers.

As a result, high-wage workers are expected to be less affected by the sweeping changes because they have skills that machines can’t replace. Low-wage jobs also could grow rapidly, partly because they cost employers less and so are often not worth supplanting with technology, while many are in health care, such as home health aides. That means middle-wage jobs will continue to decline, widening the divide between wealthy and low-income households, the report says.

The biggest challenge, Lund says, will be retraining millions of workers midcareer. Governments and businesses already have fallen short in the retraining of workers who lost jobs in the recession of 2007 to 2009.

According to the report, “there are few precedents in which societies have successfully retrained such large numbers of people.”