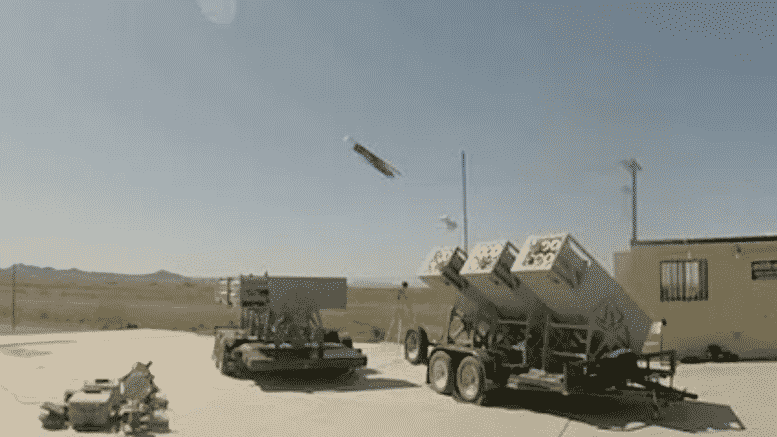 Posted By: Frank Pasquale via The Guardian October 15, 2020

Please Share This Story!
PDF 📄
The Technocrat drumbeat from the military/industrial complex is a never-ending drive to apply advanced technology to the “art” of warfare. WWIII will largely be fought with AI-controlled weapons, risking the lives of millions who are caught in the middle. ⁃ TN Editor

The video is stark. Two menacing men stand next to a white van in a field, holding remote controls. They open the van’s back doors, and the whining sound of quadcopter drones crescendos. They flip a switch, and the drones swarm out like bats from a cave. In a few seconds, we cut to a college classroom. The killer robots flood in through windows and vents. The students scream in terror, trapped inside, as the drones attack with deadly force. The lesson that the film, Slaughterbots, is trying to impart is clear: tiny killer robots are either here or a small technological advance away. Terrorists could easily deploy them. And existing defences are weak or nonexistent.

Some military experts argued that Slaughterbots – which was made by the Future of Life Institute, an organisation researching existential threats to humanity – sensationalised a serious problem, stoking fear where calm reflection was required. But when it comes to the future of war, the line between science fiction and industrial fact is often blurry. The US air force has predicted a future in which “Swat teams will send mechanical insects equipped with video cameras to creep inside a building during a hostage standoff”. One “microsystems collaborative” has already released Octoroach, an “extremely small robot with a camera and radio transmitter that can cover up to 100 metres on the ground”. It is only one of many “biomimetic”, or nature-imitating, weapons that are on the horizon.

Who knows how many other noxious creatures are now models for avant garde military theorists. A recent novel by PW Singer and August Cole, set in a near future in which the US is at war with China and Russia, presented a kaleidoscopic vision of autonomous drones, lasers and hijacked satellites. The book cannot be written off as a techno-military fantasy: it includes hundreds of footnotes documenting the development of each piece of hardware and software it describes.

Advances in the modelling of robotic killing machines are no less disturbing. A Russian science fiction story from the 60s, Crabs on the Island, described a kind of Hunger Games for AIs, in which robots would battle one another for resources. Losers would be scrapped and winners would spawn, until some evolved to be the best killing machines. When a leading computer scientist mentioned a similar scenario to the US’s Defense Advanced Research Projects Agency (Darpa), calling it a “robot Jurassic Park”, a leader there called it “feasible”. It doesn’t take much reflection to realise that such an experiment has the potential to go wildly out of control. Expense is the chief impediment to a great power experimenting with such potentially destructive machines. Software modelling may eliminate even that barrier, allowing virtual battle-tested simulations to inspire future military investments.

n the past, nation states have come together to prohibit particularly gruesome or terrifying new weapons. By the mid-20th century, international conventions banned biological and chemical weapons. The community of nations has forbidden the use of blinding-laser technology, too. A robust network of NGOs has successfully urged the UN to convene member states to agree to a similar ban on killer robots and other weapons that can act on their own, without direct human control, to destroy a target (also known as lethal autonomous weapon systems, or Laws). And while there has been debate about the definition of such technology, we can all imagine some particularly terrifying kinds of weapons that all states should agree never to make or deploy. A drone that gradually heated enemy soldiers to death would violate international conventions against torture; sonic weapons designed to wreck an enemy’s hearing or balance should merit similar treatment. A country that designed and used such weapons should be exiled from the international community.

In the abstract, we can probably agree that ostracism – and more severe punishment – is also merited for the designers and users of killer robots. The very idea of a machine set loose to slaughter is chilling. And yet some of the world’s largest militaries seem to be creeping toward developing such weapons, by pursuing a logic of deterrence: they fear being crushed by rivals’ AI if they can’t unleash an equally potent force. The key to solving such an intractable arms race may lie less in global treaties than in a cautionary rethinking of what martial AI may be used for. As “war comes home”, deployment of military-grade force within countries such as the US and China is a stark warning to their citizens: whatever technologies of control and destruction you allow your government to buy for use abroad now may well be used against you in the future.

World War 3 will be the end. The beginning of it should be read by all, it was written about long ago and can be read about today, yes it will happen for sure, and maybe very soon. Unfortunately most will shrug their shoulders and mock. When the time comes many will realize they were completely wrong and repent, while others will worship, and continue to worship the beast as they already do. https://classic.biblegateway.com/passage/?search=Revelation+6&version=KJV#:~:text=Revelation%206%20King%20James%20Version%20%28KJV%29%206%20And%2cand%20he%20went%20forth%20conquering%2c%20and%20to%20conquer.

True that! Waiting on that 7 year peace treaty that brings in the 7 year Trib period. Where within 3 1/2 years of that seven, we’ll know exactly who the Antichrist is cause he’ll walk into a “newly built” temple, and proclaim himself “god” (think he’d walk into a “used” temple to do that? I wouldn’t think so.) And since he brought peace to the world, and did all his amazing tricks for the people, just like the ones who will vote for a man, today, who is unstable, and “not quite right in the head”, they’ll have no problem… Read more »

I shudder to think of what’s coming. I read that rockets are already set up in our rivers from Russia to kill us, put there with the full knowledge of our government. There is no time left. Pastors and others must lead a Revolution.

Most pastors are in bed with our government. You might as well forget about a Revolution (but then again, never let a good crisis goes to waste, right?) Where did you read that about the “rockets set up on our rivers from russia to kill us”? I never heard such a thing, and wouldn’t mind reading about it. I shudder to think what’s coming too, it’s called a 7 year peace treaty, and one of the two countries involved in it, is Israel. Do you know about that? You’d have a lot of reading/studying to do, if you haven’t heard… Read more »

“…risking millions of lives caught in the middle.” It has ever been thus while the elites who orchestrate these conflagrations, really the scum at the bottom of the garbage can, land on their own two feet in the aftermath and or are helped to reacquire their former status by the ‘victors.’ The common people would never go to war against another common people if not manipulated into the barbarous act. The death of millions of common people is one of the great draws of war for the metaphysical mistakes the lead wars. They ‘get off’ on war knowing it will… Read more »

I’ve collected/archived a lot of articles and videos, about this subject. There’s a robot, that looks like a “dog”, in that it’s got four legs, and no head or tail, and holds the soldiers packs, and other equipment, and can climb up a steep, rocky incline. If it stumbles or falls, it corrects itself, and carries on. People have probably seen that video, about it, that came out quite a few years ago. Pretty spooky looking. And there’s, little tiny drones, that look like, and are called “bees”. There is and has been MANY different kinds of mechanical bug looking… Read more »

Oh think how happy the ELite will be to be able to kill off who ever they wish to with out having to pay for any military any longer, They must SO Relieved