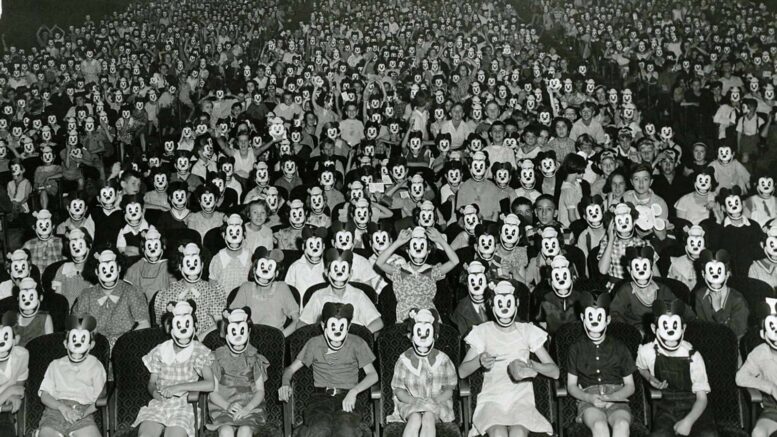 Please Share This Story!
PDF 📄
Among the many forces and objectives playing out with the globalist-driven Great Panic of 2020, cult-like behavior is coalescing into a definable cult that has all the markings typical of other cults in modern history. ⁃ TN Editor

One of the hallmarks of totalitarianism is mass conformity to a psychotic official narrative. Not a regular official narrative, like the “Cold War” or the “War on Terror” narratives. A totally delusional official narrative that has little or no connection to reality and that is contradicted by a preponderance of facts.

Nazism and Stalinism are the classic examples, but the phenomenon is better observed in cults and other sub-cultural societal groups. Numerous examples will spring to mind: the Manson family, Jim Jones’ People’s Temple, the Church of Scientology, Heavens Gate, etc., each with its own psychotic official narrative: Helter Skelter, Christian Communism, Xenu and the Galactic Confederacy, and so on.

Looking in from the dominant culture (or back through time in the case of the Nazis), the delusional nature of these official narratives is glaringly obvious to most rational people. What many people fail to understand is that to those who fall prey to them (whether individual cult members or entire totalitarian societies) such narratives do not register as psychotic.

On the contrary, they feel entirely normal. Everything in their social “reality” reifies and reaffirms the narrative, and anything that challenges or contradicts it is perceived as an existential threat.

These narratives are invariably paranoid, portraying the cult as threatened or persecuted by an evil enemy or antagonistic force which only unquestioning conformity to the cult’s ideology can save its members from. It makes little difference whether this antagonist is mainstream culture, body thetans, counter-revolutionaries, Jews, or a virus.

The point is not the identity of the enemy. The point is the atmosphere of paranoia and hysteria the official narrative generates, which keeps the cult members (or the society) compliant.

In addition to being paranoid, these narratives are often internally inconsistent, illogical, and … well, just completely ridiculous. This does not weaken them, as one might suspect. Actually, it increases their power, as it forces their adherents to attempt to reconcile their inconsistency and irrationality, and in many cases utter absurdity, in order to remain in good standing with the cult.

Such reconciliation is of course impossible, and causes the cult members’ minds to short circuit and abandon any semblance of critical thinking, which is precisely what the cult leader wants.

Moreover, cult leaders will often radically change these narratives for no apparent reason, forcing their cult members to abruptly forswear (and often even denounce as “heresy”) the beliefs they had previously been forced to profess, and behave as if they had never believed them, which causes their minds to further short circuit, until they eventually give up even trying to think rationally, and just mindlessly parrot whatever nonsensical gibberish the cult leader fills their heads with.

Listen to Charlie Manson “rapping.” Not just to what he says, but how he says it. Note how he sprinkles bits of truth into his stream of free-associated nonsense, and his repetitive use of thought-terminating clichés, described by Robert J. Lifton as follows:

“The language of the totalist environment is characterized by the thought-terminating cliché. The most far-reaching and complex of human problems are compressed into brief, highly selective, definitive-sounding phrases, easily memorized and easily expressed. They become the start and finish of any ideological analysis.” – Thought Reform and the Psychology of Totalism: A Study of “Brainwashing” in China, 1961

It can happen to pretty much any society, just as anyone can fall prey to a cult, given the right set of circumstances.

Most people cannot see that it is happening, for the simple reason that it is happening to them. They are literally unable to recognize it. The human mind is extremely resilient and inventive when it is pushed past its limits. Ask anyone who has struggled with psychosis or has taken too much LSD. We do not recognize when we are going insane.

When reality falls apart completely, the mind will create a delusional narrative, which appears just as “real” as our normal reality, because even a delusion is better than the stark raving terror of utter chaos.

This is what totalitarians and cult leaders count on, and exploit to implant their narratives in our minds, and why actual initiation rituals (as opposed to purely symbolic rituals) begin by attacking the subject’s mind with terror, pain, physical exhaustion, psychedelic drugs, or some other means of obliterating the subject’s perception of reality.

Once that is achieved, and the subject’s mind starts desperately trying to construct a new narrative to make sense out of the cognitive chaos and psychological trauma it is undergoing, it is relatively easy to “guide” that process and implant whatever narrative you want, assuming you have done your homework.

And this is why so many people — people who are able to easily recognize totalitarianism in cults and foreign countries — cannot perceive the totalitarianism that is taking shape now, right in front of their faces (or, rather, right inside their minds).

Nor can they perceive the delusional nature of the official “Covid-19” narrative, no more than those in Nazi Germany were able to perceive how completely delusional their official “master race” narrative was. Such people are neither ignorant nor stupid. They have been successfully initiated into a cult, which is essentially what totalitarianism is, albeit on a societal scale.

\nsider information received in Canada Dear REMOVED, I want to provide you some very important information. I’m a committee member within the Liberal Party of Canada. I sit within several committee groups but the information I am providing is originating from the Strategic Planning committee (which is steered by the PMO). > > I need to start off by saying that I’m not happy doing this but I have to. As a Canadian and more importantly as a parent who wants a better future not only for my children but for other children as well. The other reason I am… Read more »

Looks like it would be cheaper to pay the infected to just hang out on a cruise ship for a few weeks.

Is this for real?

I have read this so called planning committee release and it is so over the top as to be laughable. What, turning over centuries of British legal jurisprudence with the current minority parliament? If even one quarter of this nonsense was real there would be chaos in the streets if any political party tried to implement such new laws. Have you fact checked to see if a World Debt Reset Program at the civilian level is even mentioned anywhere at the IMF/WB/WEF/BIS web sites? This is likely the very amateur work of some guys in a college dorm somewhere.

Perhaps…or it could be true. Look up Agenda 2030 on the net. It is beyond disturbing – and it’s happening RIGHT NOW. It sounds to me like this plan in Canada is falling in line directly with the desired outcomes of Agenda 2030.

Now that article brought some very real clarity on what is going down. Good one P.W.