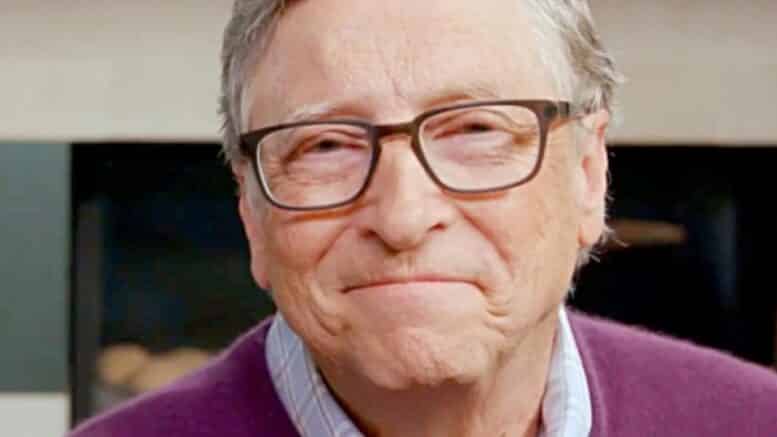 Please Share This Story!
PDF 📄
Bill Gates, the self-appointed vaccine savior of the  world, now says there will be no return to normal until a second, third, fourth or fifth generation Covid vaccine appears on the scene. Its availability might be several years away. ⁃ TN Editor

As the number of trial halts involving experimental COVID-19 vaccines and therapeutics grows, public policymakers, the scientific community, and billionaires like Bill Gates are becoming increasingly worried about an issue that analysts from Goldman Sachs raised in a recent research note, where they warned that the biggest obstacle to eradicating COVID-19 could be convincing everyone to take the vaccines.

So after doing his part to sow doubt about the reliability of President Trump’s FDA, Microsoft founder Bill Gates is now doing a series of interviews to tout his foundation’s collaboration with the WHO (which aims to provide vaccine doses to everyone in need across the developing world) and urge his audience to stop worrying and accept the vaccine, as soon as it’s available (for the record, Gates said recently that he expects vaccines to be widely available by the end of next year, though he qualified that by acknowledging that the efficacy of vaccines is still unknown).

But as of last night, that timeline has apparently changed, as Gates now apparently believes – perhaps in light of the recent cases of patients being reinfected with the virus – that the initial round of vaccines in development won’t be enough to provide complete immunity.

In an interview with NBC news last night, Gates warned that the world “won’t return to normal” until “a lot of people” take a second “super-effective” coronavirus vaccine that could be years away.

“The only way we’ll get completely back to normal is by having, maybe not the first generation of vaccines, but eventually a vaccine that is super-effective, and that a lot of the people take, and that we get the disease eliminated on a global basis,” said Gates.

We won’t be able to “build back in a positive way” until then, Gates said.

To be sure, viewers should probably take Gates’ latest projection with a grain of salt: as Gates believes our present situation will not be totally reversed until we reach “Zero COVID”, ie totally eliminating the virus worldwide.

That’s a higher bar than any other disease in modern history, as Paul Joseph Watson points out.

Gates’ interview blitz continued as he also did a pre-recorded interview with “Squawk Box” host Becky Quick, which aired Wednesday morning on the show.

Asked by Quick if he has been “surprised” at the amount of pushback to wearing masks, Gates replied that it’s what “the leaders” are saying, though he acknowledged that the messaging on masks didn’t emerge until April or May.

Still, he doesn’t see it as “some kind of ultra-important freedom thing”.

This is interesting to: https://www.youtube.com/watch?v=nbgyMddLLBQ

I had dream that this sick guy has died.

Can you find any picture of Gates wearing a MASK..Corona virus is not the actual problem,no,problem is Gates and Bioethic smarter than us types🐍

Of course, Bill Gates should know everything about vaccines. He’s the one pushing them! WHEN, exactly WHEN did it become necessary to eradicate a virus that, by definition, will change and move? If the Covid Cult of the worldwide willfully ignorant do not get what is going on in front of the faces they are completely and utterly without brain cells. BIIL GATES IS NOT A DOCTOR, A MEDIC, A NURSE. HE IS NOTHING but RICH. And that is where the rubber meets the road on the covid lie as an economic take-over tool for him, the toadies and his… Read more »

People who say BUT HE IS NOT A DOCTOR don’t see the big picture. He doesn’t need to be a doctor. He’s got doctors producing studies with the results he wants and then shilling it for him. There’s a lot more going on here than a medical issue. This so-called medical crisis is just a cover story to tie social tracking with economics, and to usher in the age of transhumanism by making us part of a system that is data-driven and strips us of human dignity- possibly even destroying our very humanity altogether. What he has done is engage… Read more »

Gates is a member of the Committee of 300 and just following their guidelines. Queen Elizabeth is the head of the Committee. George Soros is another member. Gates seems to be the one designated to push the vaccines. The Committee is dedicated to destroying democracy, ending personal freedom, and pushing transhumanism.

Paul – a little documentation would be appropriate for this

That’s it in a nutshell. However, the evil that is Gates cannot rise without its dual opposite. That’s a universal law. Something Gates probably is not aware of. He will fall in a way he does not see coming.

Bill Gates is the Anti-Christ.

What we need is a 3 point plan to rid the world of Gates and his technotwat buddies.